Much ado about liquidity? Lockup expirations and stock prices 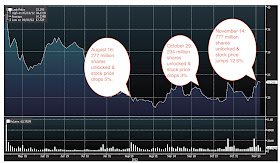 There are a host on intriguing questions that derive from lockups, their expiration and the market reaction to them, and I think it is worth taking a look at them.

The mechanics of and rationale for a 'lockup"
Facebook is not unique. Most initial public offerings (IPOs) have lockup agreements that prevent insiders (which include owners/founders and VC investors) from selling their shares for a period after the offering. These lockups are not mandated by regulatory authorities but are contractual agreements between issuers and underwriters, with the terms disclosed in the IPO prospectus. While the most common lockup period for IPOs in the US is 180 days, there are quite a few firms that stagger their lockup dates (as Facebook did).  So, why do we see lockup periods in initial public offering? There are at least three reasons for the practice.

Lockup expirations: The insiders' choice to sell (or not)
When a lockup expires, insiders get the right to sell their shares, though they can choose not to sell. While there may be other motives at play, there are three reasons why insiders may sell at the end of the lockup period:
The rest of us get to observe the actions (whether insiders sell at the end of the lockup period and how much they sell) but not the motives. Not surprisingly, we still try to find signals in the actions and react to how much insider selling there is, relative to our expectations.

Lockup expirations: The evidence and analysis
Lockup periods are therefore par for the course in initial public offerings and insiders have multiple motives for selling when lockup periods end. So, what typically happens when lockup periods end? To understand the market reaction when lockup periods expire, let's look at the effects, both positive and negative, of these events:
Looking at the trade off, the net effect should vary then across companies. You would expect the most negative price impact from lockups ending at small lightly-traded firms (where the near term trading imbalance can overwhelm the long term liquidity benefits), where there are few institutional investors or analysts tracking the firm (making insider trading that much more informative) and where issuing banks have been active in providing support (ensuring that the removal of the backstop will have more consequences.  The effect should be more muted with larger firms that are already actively traded by institutions and tracked by analysts. Since these firms are already heavily traded, the liquidity impact is likely to be smaller, the institutional and analyst following should reduce the information impact of insider trading and the size of these firms will make it impractical for investment bankers to provide more than surface level backstop support.


The studies that have looked at this phenomenon seem to reach consensus on two broad conclusions::
1. The price impact is negative: When lockups expire, stock prices drop. The drop is statistically significant (between 2 and 5%) and there is no rebound from this price drop.  In case you are tempted to try to take advantage of this price drop by selling short prior to lockup expirations, it is too small (relative to transactions costs) and too unpredictable (about a third of lockups end with increases in stock prices) to build a profitable investment strategy around.
2. The trading volume surges: Trading volume increases  on the expiration of lockup periods, with volume increasing substantially both at the time of the expiration and the periods after.  One study finds that the price impact on the lockup expiration is related to the change in liquidity in the post-lockup period, with more positive (negative) stock price reactions correlating with increases (decreases) in liquidity.


Looking at Facebook
Based on the last section, I would argue that analysts who have used the lockup expirations as a rationale for Facebook's stock price performance since its IPO  have been reaching for straws. Facebook is a large market cap firm (market cap > $50 billion), with substantial trading volume and a heavy analyst following. It is not the type of company where you would have expected to see dramatic up or down moves on lockup expirations.

That is not to say that lockup expirations are non-events, since even at Facebook, there have been sizable price reactions to the first three lockup expirations - negative (-5%) for the first one, slightly less negative on the second one (-3%) and positive (13%) for the third.  Rather than search for elaborate rationale for the different market reactions, I would point to price momentum around each of the expirations. The first lockup period expired in the immediate aftermath of a bad earnings report in August, with the stock price already sliding, and the market reaction was negative. The second lockup period expired after the stock had spiked on the third quarter earnings report but was retracing its steps in the days after. The lockup period that expired last week (on November 14) was after the second earnings report, which was viewed as good news, and when the stock had upward momentum. Looking at this small sample, it seems to me that at least in Facebook, insiders have behaved like other momentum investors, selling when everyone is selling and holding if the prevailing sentiment is positive.  If there is a broader lesson to be learned from these experiences, it is that we attribute too much wisdom and knowledge to insiders, at least at young growth companies.  Rather than being ahead of the market in their assessments of value, insiders at these companies are often just as uncertain as the rest of the market and just as likely to follow the crowd. As a stockholder in Facebook now (my limit order did come through), I am less inclined to pay attention to what Zuckerberg thinks or does about the company and more to the fundamentals that will drive its value over time.
Aswath Damodaran at 3:24 PM