The Yahoo! Chronicles! Is this the End Game?

The big news of the day from the tech world comes from Yahoo (I am going to skip the exclamation point through the entire story, but don't read significance into that exclusion), where stories suggest that the board of directors may soon decide whether to sell its operating business, leaving it as a shell company with holdings in two other public companies, Yahoo Japan and Alibaba. The story has resonance for many reasons. One is the presence, as is required in any good story, of a villain, a role that is usually assigned to an activist investor and in this case ably filled by Starboard Value, a fund that has been pushing for this divestiture. The second is the existence of a heroine, albeit a tarnished one, in the form of Marissa Mayer, who was supposed to save the company by boldly moving where Yahoo had not gone before. The third seems to be an almost existential question of whether the  potential end game for Yahoo, a company that many journalists grew up with as part of the technology landscape, is an indication of their own aging.

Stepping back in time
Let's start with a reality check. By the time Marissa Mayer became CEO of Yahoo in 2012, its glory days were well in its past, as you can see in this graph that traces its history from young, start-up to mature (and beyond) in the life cycle: 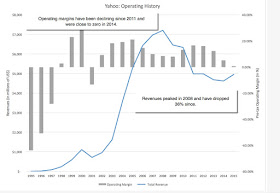 Not only had Yahoo decisively and permanently lost the search engine fight to Google, but it was a company in search of a mission, with no clear sense of where its future lay.

Ironically, the two best investments that Yahoo made during the recent past were not in its own operations, but in the other companies, an early one in Yahoo Japan, which prospered even as its US counterpart stumbled, and the other in Alibaba in 2005, a prescient bet on a then-private company. Alibaba's online sites, Taobao and TMall, through which almost 75% of all online retail traffic in China flows, makes it a legitimate and valuable symbol of the China story and it went public late last year to fanfare and a record-breaking market capitalization (for an IPO). I valued Alibaba at the time of its IPO filing and I extended my analysis to include Yahoo, which at the time held 21% of Alibaba. While my valuations need to be updated to reflect what has happened in the last year, the picture that I drew in September 2014, breaking down Yahoo's intrinsic value into its component parts remains largely intact:

The challenge that Ms. Mayer took on was to not only turn around a company that had lost its way in terms of its core business but one that derived most of its value from holdings in two companies that she had no control over. Her history of success at Google and the fact that she was young, attractive and female all played a role in some  choosing her as the anointed one, the savior of Yahoo.

Why Marissa Mayer's quest was always long shot
The odds of Ms. Mayer succeeding at Yahoo, at least in the ways that many of her strongest supporters defined success, were low right from the beginning, for two reasons:
Lest I sound fatalistic, it is true that there are counter-examples, aging tech companies that have rediscovered their youth, as evidenced by IBM's rebirth in 1992 and Apple's new start under Steve Jobs. Much as we would like to give Lou Gerstner and Steve Jobs credit for pulling off these miraculous feats, I believe that it was a confluence of events (many of out of the control of either man) that allowed both miracles to happen. The Lou Gerstner turnaround at IBM was aided and abetted by the the tech boom in the 1990s and as for Steve Jobs, the myth of the visionary CEO who could do no wrong has long since overtaken the reality. By promoting both turnarounds as purely CEO triumphs, we set ourselves up for the Yahoo scenario, where a new CEO (Marissa Meyer) is assumed to have the power to turn a company around but we are then disappointed in her failure to do so.  I am less disappointed in Ms. Mayer than many others, since my expectations on what she could do at Yahoo! were much lower, right from the start.

Betting the farm!
In a recent article in the New York Times, Farhad Manjoo, a writer that I enjoy reading and respect for his tech savvy, made a case that Ms. Mayer's failures can be traced to her lack of boldness at Yahoo, or as he put it, her unwillingness to bet the farm, an ill-suited choice of expressions in many ways, at least for this CEO, and this company. First, as the CEO of a publicly traded company, she would not have been betting her farm, but that of her stockholders. Second, if you buy into the notion of Yahoo the company, as a farm, it is  difficult to bet the farm, when you are given control of only the farmhouse (Yahoo operating assets), as Ms. Mayer was with Yahoo, and the rest of the farm (Yahoo's holdings in Alibaba and Yahoo Japan) is off-limits to you.. Third, betting the farm also connotes seeking out of long odds, in the hope of a big payoff, entirely okay if you are a young start-up, with little to lose, but not so in the case of Yahoo.

Mr. Manjoo is not alone in believing that Marissa Mayer's fault was that she did not make a bigger acquisition or larger investment in some new business (for the most part, unspecified). In fact, it is part of what I termed the Steve Jobs syndrome, where CEOs aspire to be the next Steve Jobs. While some go so far as to don black turtlenecks and strut on the stage like he did, most settle for wanting to be heroic enough during their tenure to have books written about them, and Ashton Kutcher play them on the screen. More dangerous is what follows, since to be like Steve Jobs, you have to make a small company into a really big one, and the way to do that is to take dangerous risks or to "bet the farm". The end results reflect the laws of probability, and the stockholders in these firms end up paying for a CEO's play for celebrity status.

If you accept my thesis that many aging tech companies resemble the Walking Dead, you should also accept the follow-up proposition that what these companies need are not "visionary" CEOs but pragmatic ones, less Steve the visionary, and more Larry the Liquidator, a person with limited ambitions and a readiness to preside over the dismantling of an enterprise. Unfortunately, if you are such a CEO, and your life were made into a movie (odds of which are low), you will be played by  Danny DeVito and not Ashton Kutcher, but there is always a price for doing the right thing. The debate about what Ms. Mayer should or could have done at Yahoo is a subtext to the other great debate  about buybacks at US companies, and especially those at tech titans like IBM and Microsoft. Rather than wringing our hands at how these buybacks are leading to less investment at these companies, we should be relieved that these companies have moved past the denial phase and are dealing with the reality of aging.

What now?
If I were to offer advice to the board, in keeping with the gambling theme created by betting the farm, I would suggest that they listen to this Kenny Rogers tune. It is time get past the denial and sell Yahoo's operating business, while there still is a business to sell, and to get the best possible price on the deal, I would suggest the following:
The cash from that sale and perhaps even the rest of the cash balance should be returned to stockholders, leaving Yahoo as a holding company, with Yahoo! Japan and Alibaba as its holdings. The tax consequences of selling these holdings will be substantial and the board should remove the resulting market discount by announcing its intent to continue to run Yahoo as a holding company, a closed-end fund with two holdings. As a stockholder in Yahoo, I can live with that, since I am getting Alibaba and Yahoo! Japan at a significant discount on their traded value, as can be seen below (even assuming that Yahoo gives away its operating assets for nothing):


Towards the end of my post on Yahoo from last year, I suggested that my returns on Yahoo would be inversely proportional to Ms. Mayer's ambitions and argued that my best case scenario would be one where she scaled the number of employees in the firm down to one (herself) and acquired two computer displays, one of which would deliver real time price quotes on Alibaba and the other the latest price of Yahoo Japan. If the board acts to sell Yahoo's operating assets, we may be closer to that vision than I ever thought I would get.

If this is the end game, I am thankful that, while Ms. Mayer did show flashes of ambition, as revealed in her acquisitions (with the Tumblr deal being the largest)  over the last three years, she did not "bet the farm" on an outlandishly large acquisition or investment. Perhaps, I am giving her more credit than I should, and the only reason she showed restraint is because she could not find a tax advantaged way to get rid of Yahoo's investments in Yahoo Japan and Alibaba. If so, this may be one of the few times that I am thankful to the IRS for not allowing the transaction to go through, since on its completion, Yahoo would have ended up with $20 billion in cash, and I shudder to think of how much damage a "bet the farm" CEO could have done with that money.