Venture Capital: It is a pricing, not a value, game!

Venture capitalists (VCs) don’t value companies, they price them! Before you explode, implode or respond with righteous indignation, this is not a critique of what venture capitalists do, but a recognition of reality. In fact, not only is pricing exactly what you should expect from VCs but it lies at the heart of what separates the elite from the average venture capitalist. I was reminded of this when I read a response from Scott Kupor of Andreessen Horowitz, to a Wall Street Journal article about Andreessen, that suggested that the returns earned by the firm on its funds were not as good as those earned at other elite funds. While Scott’s intent was to show that the Wall Street Journal reporter erred in trusting total returns as a measure of VC performance, I think that he, perhaps unintentionally, opened a Pandora’s box when he talked about how VCs attach numbers to companies and how these numbers get updated, and how we (investors, founders and VCs) should read them, as a consequence.

The WSJ versus the VC: A Recap
Let’s start with the Wall Street Journal article that triggered the Kupor response. With the provocative title of “Andreessen Horowitz’s returns trail venture capital elite”, it had all the ingredients for click bait, since a big name (Andreessen Horowitz) failing (“trail venture capital elite”) is always going to attract attention. I must confess that I fell for the bait and read the article and walked away unimpressed. In effect, Rolfe Winkler, the Journal reporter, took the three VC funds run by Andreessen and computed an IRR based upon the realized and unrealized gains at these funds. I have reproduced his graph below: 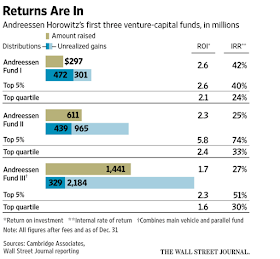 While the title of the story is technically correct, I am not sure that there is much of a story here. Even if you take the Journal’s estimates of returns at face value, if I were an investor in any of the three Andreessen funds, I would not be complaining about annual returns of 25%-42%, depending on the fund that I invested in. Arguing that I could have done better by investing in a fund in the top 5% of the VC universe would be the equivalent of claiming that Kevin Durant did not having a good NBA season last year, because Lebron James and Stephen Curry had better seasons.

In the hyper-competitive business of venture capital, though, the article must have drawn blood, since it drew Scott Kupor's attention and a response. Scott focused attention specifically on what he believed was the weakest link in the Journal article, the combining of realized and unrealized gains to estimate an internal rate of return. Unlike investments in public equities, where the unrealized returns are based upon observed market prices for traded stocks and can be converted to realized returns relatively painlessly, Scott noted that unrealized returns at venture capital funds are based upon estimates and that these estimates are themselves based upon opaque VC investments in other companies in the space and not easily monetized. Implicitly, he seemed to be saying that not only are unrealized returns at VC funds subject to estimation error, but also to bias, and should thus be viewed as softer than realized returns. I agree, though I think it is disingenuous to go on to argue that unrealized returns should not be considered when evaluating venture capital performance, since VCs seem to have qualms about using them in sales pitches when they serve their purpose.

The VC Game
The Kupor response has been picked in the VC space, with some commenters augmenting legitimate points about return measurement but many more using the WSJ article to restate their view that non-VC people should stop opining about the VC business, because they don’t understand how it works. Having been on the receiving end of this critique at times in the past, you would think I would know better than to butt in, but I just can’t help myself. I may not be qualified to talk about the inner workings of the venture capital business, but I do believe that I am on firmer ground on the specific topic of how VCs attach numbers to the companies that they invest in.

VCs price businesses, not value them!
I have made the distinction between value and price so many times before that I sound like a broken record, but I will make it again. You can value an asset, based upon its fundamentals (cash flows, growth and risk) or price it, based upon what others are paying for similar assets, and the two can yield different numbers.

In public investing, I have argued that this plays out in whether you choose to play the value game (invest in assets where the price < value and hope that the market corrects) or the pricing game (where you trade assets, buying at a lower price and hoping to sell at a higher).  I would be glad to be offered evidence to the contrary but based upon the many VC "valuations" that I have seen, VCs almost always play the pricing game, when attaching numbers to companies, and there are four ways in which they seem to do it:
At the time of a VC investment, the VC wants to push today’s pricing for the company lower, so that he or she can get a greater share of the equity for a given investment in the company. Subsequent to the investment, the VC will want the pricing to go higher for two reasons. First, it makes the unrealized returns on the VC portfolio a much more attractive number. Second, it also means that any subsequent equity capital raised will dilute the VC’s ownership stake less. If you reading this as a criticism of how venture capitalists attach numbers to companies, you are misreading it because I think that this is exactly what venture capitalists should be doing, given how success is measured in the business. This is a business where success is measured less on the quality of the companies that you build (in terms of the cash flows and profits they generate) and more on the price you paid to get into the business and the price at which you exit this business, with that exit coming from either an IPO or a sale. Consequently, how much you are willing to pay for something becomes a process of judging what you will get when you exit and working backwards.

But Venture Capitalists have a data problem
It is not just venture capitalists who play the pricing game. As I have argued before, most investors in public markets (including many who call themselves value investors) are also in the pricing game, though they use pricing metrics of longer standing (from PE to EV/EBITDA) and have larger samples of public traded firms as comparable firms. The challenges with adapting this pricing game to venture capital investments are primarily statistical:
I am sure that nothing that I have said here is new to venture capitalists, founders and those close to the VC process, but it is the subtle differences that throw off those whose primary experience is in the public markets. That is one reason that public investors should take the numbers that are often bandied about as valuations of private companies (like Palantir, Uber and Airbnb) with a grain of salt.  It is also why I think that public investors like mutual funds and university endowment funds should either tread lightly or not all in the space. Even within the VC business, it is sometimes easy, especially in buoyant times to forget how much the entire pricing edifice rests as much on momentum and mood, as it does on the underlying fundamentals.

With Predictable Consequences
So, let’s see. VCs price companies and that pricing is often based upon really small samples with infrequently updated and tough-to-read data. The consequences are predictable.
There is one final point that also needs to be made. Much as we like to talk about the VC market and the public market as separate, populated by different species, they are linked at the hip. To the extent that a venture capitalist has to plot an exit, either in an initial public offering or by selling to a publicity traded company, if the public market catches a cold, the venture capital market will get pneumonia, though the diagnosis may come much later.

The VC Edge
If I were to summarize the entire post in a couple of sentences, here is what it would say. Venture capitalists price the companies they invest in, base that pricing on small samples of opaque transactions and the pricing is therefore more likely to be wrong and lag reality. That sounds pretty damning, but I think that these features work to the advantage of venture capitalists, or at least the very best among them. That may sound contradictory, but here is my basis for making that statement.

How do I reconcile my argument that the VC pricing game is inherently more error-prone and noisy with the fact that VCs seem to make money at it? I think that the very factors that make it so difficult to price and profit of a VC investment are what allow VCs collectively to earn excess returns and the very best VCs to set themselves apart from the rest. In particular, the best in the business set themselves apart from the rest on three dimensions:
If you are an investor in a VC fund, therefore, you should of course look at both realized returns and unrealized returns, but you should also look at how the fund measures its unrealized returns and how it has generated its returns. A realized return that comes primarily from one big hit is clearly less indicative of skill than a return that reflects multiple hits over longer time periods. After all, if separating luck from skill is difficult in the public marketplace, it can become even more so in the venture capital business.