Investing Whiplash: Looking for Closure with Apple and Amazon!

In September, I took a look, in a series of posts, at two companies that had crested the trillion dollar market cap mark, Apple and Amazon, and concluded that series with a post where I argued that both companies were over valued. I also mentioned that I was selling short on both stocks, Amazon for the first time in 22 years of tracking the company, and Apple at a limit price of $230. Two months later, both stocks have taken serious hits in the market, down almost 25% apiece, and one of my short sales has been covered and the other is still looking profitable. It is always nice to have happy endings to my investment stories, but rather than use this as vindication of my valuation or timing skills, I will argue that I just got lucky in terms of timing. That said, given how much these stocks have dropped over the last two months, it is an opportunity to not just revisit my valuations and investment judgments, but also to draw some general lessons about intrinsic valuation and pricing.

My September Valuations: A Look Back
In September, I valued Apple and Amazon and arrived at a value per share of roughly $200 for Apple and $1255 for Amazon, well below their prevailing stock prices of $220 (Apple) and $1950 (Amazon). I was also open about the fact that my valuations reflected my stories for the companies, and that my assumptions were open for debate. In fact, I estimated value distributions for both companies and noted that not only did I face more uncertainty in my Amazon valuation, but also that there was a significant probability in both companies that my assessment (that the stocks were over valued) was wrong. I summarized my results in a table that I reproduce below:
I did follow through on my judgments, albeit with some trepidation, selling short on Amazon at the prevailing market price (about $1950) and putting in a limit short sell at $230, which was fulfilled on October 3, as the stock opened above $230. With both stocks, I also put in open orders to cover my short sales at the 60th percentile of my value distributions, i.e., $205 at Apple and $1412 at Amazon, not expecting either to happen in the near term. (Why 60%? Read on...) Over the years, I have learned that investment stories and theses, no matter how well thought out and reasoned, don't always have happy endings, but this one did, and at a speed which I did not expect: 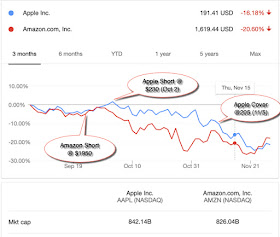 My Apple short sale which was initiated on October 3 was closed out on November 5 at $205, while Amazon got tantalizingly close to my trigger price for covering of $1412 (with a low of $1420 on November 20), before rebounding.

Every investment, whether it is a winner or a loser, carries investment lessons, and here are mine from my AAPL/AMZN experiences, at least so far:
Bottom Line

As investors, we are often quick to claim credit for our successes and equally quick to blame others for our failures, and I am no exception. While I am sorely tempted to view what has happened at Apple and Amazon as vindication of my value judgments, I know better. I got lucky in terms of timing, catching a market correction and one targeted at tech stocks, and I am inclined to believe that  is the main reason why my Apple and Amazon positions have made me money in the last two months. With Amazon, in particular, there is little that has happened in the last two months that would represent the catalysts that I saw in my initial analysis, since it was government actions and regulatory pushback that I saw as the likely triggers for a correction. With Apple, I do have a longer history and a better basis for believing that this is market bipolarity at play, with the stock price over shooting its value, after good news, and over correcting after bad news, but nothing that has happened  to the company in the last two month would explain the correction. Needless to say, I will bank my profits, even if they are entirely fortuitous, but I will not delude myself into chalking this up to my investing skills. It is better to be lucky than good!