Stock Buybacks: What is happening and why?

S&P's most recent update indicates that US companies, after a pause for about a year after the banking crisis, are back in the buyback game. In the third quarter of 2010, the S&P 500 companies bought back almost $ 80 billion of stock, up 128% from the third quarter of 2009. Note that this is part of a long term shift away from dividends towards buybacks in the United States, as is evidenced by the figure below which reports total dividends and buybacks at US companies starting in 1988: 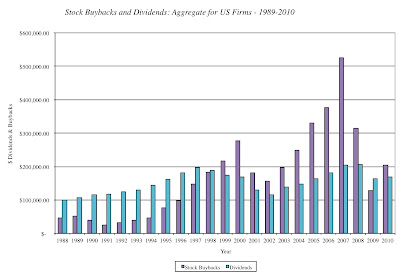 Note that aggregate dividends amounted to $ 100 billion in 1988 and aggregate stock buybacks were $ 50 billion in that year. (In fact, if you go back to the early part of the 1980s, buybacks were just a pittance... an unusual occurrence even at large, cash-rich companies). During the 1990s, buybacks increased dramatically and in 1999, cash returned in buybacks exceeded cash paid out in dividends, in the aggregate. The trend continued uninterrupted through 2008, with 2007 representing a high water mark for buybacks. The market collapse and economic fears that followed induced companies to hold back on buybacks in 2009 but it was clearly just a pause, not a stop, as the return to buybacks in 2010 indicates.

So, what has caused this  movement away from dividends in the last two decades? It cannot be that dividends are taxed more heavily than capital gains: Note that dividends have been taxed at much higher rates than capital gains going back to the early decades of the last century. In fact, in 1979, the highest marginal tax rate on dividends was 70%, while it was only 28% on capital gains. The changes in the tax laws in the last three decades have reduced the tax disadvantage of dividends - in fact, they have both been taxed at 15% since 2003 - and cannot therefore be a rationale for the surge in buybacks. It also cannot be attributed to companies thinking that their stock prices were too low, since these buyback surge occurred during the bull markets of the 1990s and 2004-2007, not during down markets.

There are several possible explanations.
a. Management compensation: The first is the shift towards using options in management compensation alters managerial incentives on the dividends vs. buybacks choice. When you pay a dividend, your stock will drop on the ex-dividend day whereas a buyback should not have the same effect (I will talk about the price effect of buybacks in my next post). As an investor, you may not care because you get a dividend to compensate for the price drop. As a manager with options, you do care, since your option value will decrease with the stock price.
Testable hypothesis: Companies that reward their managers with big option grants or tie compensation to price per share should buy back more stock than companies that have more traditional compensation packages (bonuses tied to profits, for instance).
b. Uncertainty about earnings: The second is that dividends are sticky: once you initiate or increase a dividend, you are expected to keep paying that dividend. Buybacks are flexible: companies can buy back stock in one year without creating expectations about future years. Companies that are uncertain about future earnings will therefore be more likely to buy back stock than pay dividends. It is my contention that deregulation (of telecommunications, airlines and a host of other businesses) in conjunction with globalization (and the concurrent loss of secure local markets) has resulted in less predictability in earnings across the board.
Testable hypothesis: Companies in sectors with more unstable earnings should return a larger portion of cash in stock buybacks (and less in dividends) than otherwise similar companies (in terms of cash flow) in sectors with more predictable earnings.
c. Changing investor profiles: A more debatable reason is that the expansion of hedge funds and private equity have changed investor profiles in the stock market. These investors tend to be focused on price appreciation (rather than dividends) and often are unwilling to wait for their cash.
Testable hypothesis: Companies that have activist institutional investors or are held by hedge funds/private equity holdings should be more likely to buy back stock.
d. The Dilution Delusion:   A stock buyback reduces the number of shares outstanding and generally increases earnings per share. Applying the current PE ratio to the higher earnings per share should result in a stock price. If this logic holds, stock buybacks are magic bullets that companies can use to push their stock price up. There is a fatal flaw in this reasoning, which I will examine in my next post.
Testable hypothesis: The more focused a company becomes on earnings per share, the greater the likelihood that the company will buy back stock.

I don't see any reason to believe that these shifts will be reversed in the near future. In fact, I will go further. I think that you will see companies across the globe shift to buybacks or at least to more flexible dividend policies (tied to earnings).  My next three posts will revolve around the buyback question.  In the first, I will take a closer look at the alluring (but untrue) argument that a buyback is always good for stock prices. In the second, I will look at the consequences of the shift towards buybacks for traditional investment rules and valuation models that have been built around conventional dividends. In the last one, I will argue that dividends should not be abandoned, but that it is time we rethink how companies set and change dividends.
Posted by Aswath Damodaran at 10:09 AM

Hi Sir,
One of the reason could also be that there have been increase in M&A activities in the last decade(2000-2010). Although there are some compensation structures that benefits the outgoing management (which invariably is the case in takeovers more specifically the hostile ones),in most of the cases the outgoing management of the company taken over are at a loss. Buy backs can be uses to prevent the takeovers.

I'm very happy to see you considering the dividend vs. buyback issue. The institution of the 1982 SEC 'safe harbor' rule is often seen as the kick start of the growing share buyback trend. As a dividend proponent in general, I can appreciate a well timed share buyback, but often don't look on the announcements as something I should be happy about. I've long tried to come up with some metric for evaluating whether I should consider a share buyback as positive or not, frequently defaulting to earnings or free cash flow yield compared to ROE, but find that rule of thumb often lacking.

I would love to see companies have to report the 'returns' on their past share buybacks for a decade or longer in the 10K. Not likely to happen I suspect.

I look forward to your further posts on the subject.

I am a little intrigued by your argument of substitution between dividends and buyback. More so in relation to the chart above. There seems to be a positive correlation in the direction of change in dividends and buybacks. Also, the only concrete argument for the case is by Grullon and Michaely (2002). Another argument, as rightly pointed by 'Prolin', is the case of a takeover threat (Stulz, 1988 comes to mind).

Thinking of the chart again, I feel a better instance of substitution would be the average dividend payout compared with the repurchase payout.

Well, this is my first visit to your blog! We are a group of volunteers and starting a new initiative in a community in the same niche. Your blog provided us valuable information to work on. You have done a marvellous job!

Great blog. All posts have something to learn. Your work is very good and i appreciate you and hoping for some more informative posts.keep writing.

Excellent blog! I truly love how it is easy on my eyes and also the info are well written. I am wondering how I can be notified whenever a new post has been made. I have subscribed to your rss feed which need to do the trick! Have a nice day!IT Support

Thanks for sharing the information. That’s a awesome article you posted. I found the post very useful as well as interesting. I will come back to read some more. Stock tips

Congratulations on having one of the most sophisticated blogs Ive come across in some time! Its just incredible how much you can take away from something simply because of how visually beautiful it is. Youve put together a great blog space --layout. This is definitely a must-see blog!
Stock Trading Tips

Hi, I am a Commodity tips provider and I like to read and write article or blogs, mainly I read all blogs, it is my habit to collect information where ever I can, it will never waste ,today I caught your blog and it is written nicely with good content.....I appreciate it....

Effective post and useful for everyone, the readers and visitors could easily understand the way you have written. Must appreciation for your great efforts in findings which has affecting people like me. I am very impressed by today’s post and supportive one. Looking forward more post from you.

Technical investors judge price and volume recognize everything in the market. They study charts for forecasting of future stock price or financial price activities.

One of the reason could also be that there have been increase in M&A activities in the last decade(2000-2010). Although there are some compensation structures that benefits the outgoing management (which invariably is the case in takeovers more specifically the hostile ones),in most of the cases the outgoing management of the company taken over are at a loss. Buy backs can be uses to prevent the takeovers.