In my last post, I looked at the options that investors in Apple face today. In this one, I hope to look at what Apple can learn from the market mayhem in its stock, and, in the process, adapt. As an Apple stockholder now, I am at least partly motivated by self interest, but I am also a long time Apple product user and I would like to see the company on steadier footing. So, here are some general suggestions that I would have for Apple management (though I am sure that they are much too busy tending to day-to-day business to be reading blog posts):
I know... I know... All of this will make Apple a more boring company, but I do have one avenue that the company should explore that can still provide excitement to investors, while also creating value. Apple’s great successes in the last decade have come from “creative destruction”, where it has gone into established markets with game changers – retailing with iTunes and Apple stores, portable music players with the iPod, the cell phone market with the iPhone and the tablet market with the iPad. Its success in each of these markets has made it a large player in each of them, which is a problem. As Clayton Christensen, Harvard’s strategy guru, notes, it is difficult for established players to be "disruptive innovators" because they have too much to lose, and Apple can no longer afford to be revolutionary in any of its existing markets. It has two choices. It can put its youthful, creative destruction ways behind in and grow up, or it can go for creative destruction in new markets. I think it should try for a combination, playing defense in the smartphone and tablet markets, and using its competitive advantages to crack open new markets. Unlike Samsung or Microsoft, Apple has never been just a technology company. Its strength has always come from a unique mix of design (software & hardware), elegance and efficiency, and it is this combination that has given it pricing power.

So, where should Apple look next? I would suggest looking for businesses where existing companies churn out poorly designed and consumer-unfriendly products, but are trapped by a lack of imagination and legacy choices into continuing down that path. I can think of at least a dozen that I use or interact with on a day-to-day basis. While televisions have been bandied about as the next big Apple market, I don’t see why the business has to be electronic. I am sure that my airline experience would be better on Apple Air, my hotel stay more comfortable at Apple Hotels and my tax money better spent with Apple Government.
Posted by Aswath Damodaran at 4:42 PM 18 comments:

Are you a value investor? Take the Apple test

The bottom has clearly fallen out for Apple's stock price. After last week's earnings report, the stock that had already dropped 30% from its high of $705 set in September to $500/share, dropped another 15% to finish at $440/share. The company that could do no wrong a few months ago now is viewed as incapable of doing anything right. Has the stock fallen too much or is this just the beginning of a longer term drop in value? Is it time to buy, time to sell or time to sit on your hands?

Looking at the landscape, I would categorize Apple investors and potential investors into three groups right now, based on their views of its value and the current price. 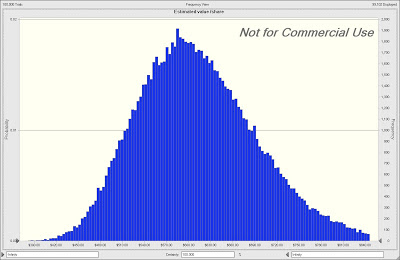 Based on my estimates, and they could be skewed by my Apple bias, at its current stock price of $440, there is a 90% chance that the stock is under valued.

If, like me, you are in this last group, you are being tested mightily now, torn between a belief that the stock is under valued and a market that does not seem to care. It is a good test of whether you are a value investor and what you do will depend upon two assessments:
If you pass the value investing test and feel confident in your assessment of value, I think you should take the leap.  If you do, as I did (albeit at $500/share),  keep the following cautionary notes in mind:
Let me close by saying that I will go to bed tonight, not thinking about what Apple's stock price will do tomorrow or the day after. I have made my choice and I am at peace with it. If you lie awake at night thinking about the stocks you have bought or sold, you just failed the final test of value investing.
Posted by Aswath Damodaran at 9:52 PM 103 comments:

Data Update 2013: The Dark Side of Numbers

For the last two decades, I have dedicated the first two weeks of each new year to a ritual. I obtain/collect/download data on all publicly traded companies listed globally, using a variety of data sources, and then analyze and present the data, aggregated at a number of different levels: by country, by region (US, Europe, Emerging Markets, Japan, Australia & Canada) and by industry. I report on measures of operations (profit margins, turnover ratios, working capital), measures of leverage (debt ratios), measures of risk (beta, standard deviation, equity risk premiums, country risk premiums) and pricing measures (earnings multiples, book value multiples, revenue multiples). I just completed my 2013 update and you can find it by clicking here.

I start with a belief that all data should be accessible and available to all investors at low or no cost, but my motives for providing my reading of the data are far from altruistic. I draw on the numbers that I estimate through the rest of the year for my teaching, analysis (valuation or corporate finance) and writing (blogs, books). In other words, I would have analyzed all of this data anyway and having completed the work, I see little benefit in keeping it behind a pay wall or passwords. Let me hasten to add that nothing that I do is particularly original nor is it path breaking and my task is made easier by the easy access that we have to raw data. I do hope, though, that while I do make mistakes, that I have not let my personal biases or views color the data, and that that nothing that I do is opaque.

Each year, I also try to add something new to the dataset to keep it fresh and this year, I have added company-specific estimates of  costs of equity and capital (in US dollar terms) in the individual company data sets (look to the top of the linked data page). In making these estimates, though, I had to make very broad assumptions about country risk.  For instance, I used the risk premium of the country of incorporation to the company, though it is preferable to use the risk premium based on operations. So, take these cost of capital estimates with a grain of salt, and if you prefer a more precise estimate for a company, you should do in more detail.

When I finished my update a year ago, I posted on it here, and talked about one of my favorite movies/books, Moneyball, in the context of arguing that intuition & experience were vastly overrated in business. Much of what we think we have learned or think we know about investing and corporate finance is skewed by psychological flaws that we all share: faulty framing, hindsight bias and selective memory, and good data can play a cleansing role. That post represented the “good” that I see in data/numbers, and I thought that this year’s post, for balance, should offer the other side of the argument. I know that data can be misused and manipulated, and that some of my own data has been used to back up specious arguments in multiple settings. In particular, here are three practices relating to data that I find distasteful and suggestions on how you can counter them.

1. Data to intimidate: An article in the Wall Street Journal  pointed to fact that people who are unfamiliar with numbers tend to give them too much weight to them and are particularly swayed by "mathematical" arguments, even if they are nonsensical. It is this weakness that is used by some number crunchers to intimidate those that may not have the same degree of facility with numbers. I have seen corporate financial analyses and valuations where analysts use table after table of numbers, to bludgeon others into submission, using acronyms, jargon and greek alphabets to further the rout.
The counter: The best weapons against number intimidation are common sense and a focus on the big picture. I hope that having access to my data will give you some ammunition in this endeavor but having a solid grounding in first principles of valuation and corporate finance alway helps.

2. Data to mislead: If you have access to a great deal of data, you can parse the data and choose pieces to back up a preconception or argument that you want to advance. A couple of years ago, the effective tax rates that I publish on my site, for US companies, were used by some to advance the argument that US companies were not paying enough in taxes. Looking at the 2013 update on tax rates, that number is low (14.93%), but it is the average effective tax rate across all US companies, including those that are money losing (and thus paid no taxes). Looking only at money-making companies, the average effective tax rate is 28.37%, and the weighted average tax rate is even higher at 30.05%. So, if you have an agenda, you can take your pick to make the argument that US companies pay too little, just enough or even too much in taxes.
The counter: While there is little that you can do to stop people from using data selectively, you can counter their arguments by presenting them with the numbers that they are ignoring. In fact, it was in response to the tax rate debate that I started reporting the average tax rates for money-making companies and aggregated tax rates in my datasets.

3. Data to deflect and evade responsibility: Many analysts use data to avoid making tough judgments about businesses or dealing with uncertainty. Thus, assuming that a company will earn a profit margin typical of the industry is much easier to do than analyzing its competitive advantages and estimating a margin, based on your assessment. Similarly, using a historical or a service supplied equity risk premium in valuation is far simpler than estimating one, based upon the macroeconomic risks that we face in markets today. In fact, using an expert or a service estimate of these numbers (using an equity risk premium from a data service like Ibbotson or even my website) allows analysts to claim immunity from errors and to pass the buck, if the numbers turn out to be wrong in hindsight.
The counter: I have absolutely no concerns about you borrowing data and spreadsheets from my website but please make them your own by adapting and modifying them to not only fit your needs to but also to reflect your points of view.

I hope that you find my data useful in your work or research. If you do, that is more than sufficient return on any time that I have invested in putting it together. If you can think of ways in which it can be more useful or complete, please do let me know and I will try my best to incorporate those suggestions into next year's update.
Posted by Aswath Damodaran at 4:20 AM 38 comments: