As an investor, would you buy shares in a company that is at the center of a political and legal firestorm? What if this company has a CEO who has lost the faith of his board and an ex-CFO who is being accused of shady financial practices? And would you pull  the buy trigger if the company has delayed its scheduled annual filing by more than two months, and by doing so is running the risk of violating debt covenants and being pushed into default? And to top it all off, would you be a little worried  if the largest investor in the stock, a well known activist with his reputation and wealth on the line, is now calling the shots? No way, you say! At the right price, I would, and that is the reason that I decided to revisit my Valeant valuation last week, six months after I valued it for the first time, in the aftermath of a crisis born of hubris and happenstance. In structuring this post, I will draw on an old-time consulting matrix, where companies were classified into stars, cash cows, dogs and question marks, to illustrate the transience of these classifications, since Valeant has cycled through the entire matrix in a year.

Valeant's rise from an obscure Canadian drug company to pharmaceutical star has been well chronicled and rather than drown you in prose, I think it is best captured in this picture, which shows the increase in market value (market cap and enterprise value) and operating numbers (revenues and operating income), especially between 2009 and 2015:
During a period when other pharmaceutical companies were struggling with revenue growth and profit margins, Valeant outstripped them on both counts, growing revenues at almost 43% a year while posting higher operating profit margins than the rest of the sector. At least on the surface, the company seemed to be delivering the best of all combinations: high growth with high profitability.

So, how did Valeant pull of this feat? In an earlier post on the company, in November 2015, I argued that the Valeant business model was a stool with three legs: growth from acquisitions, with the acquisitions funded primarily with debt, followed by a strategy of increasing prices on "under priced" drugs. 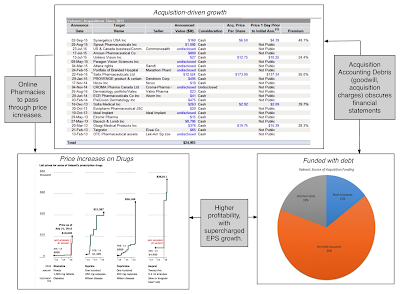 The unique combination of growth and profitability made the company a target for value investors, making it a favored stop for investors as diverse as Bill Ackman, the activist investor, and the Sequoia Fund, a storied mutual fund, and a dominant part of their portfolios. In their defense, not only were these investors transparent about their big bets on Valeant, but at least until September 2015, their concentration was viewed as a strength rather than a weakness. In fact, when I posted on why diversification is a necessary component of even a value investing strategy, it was these two investors that were held up as a counters to my argument.

To see the allure of Valeant to value investors, let me go back to mid-year last year, when the company's business model was going strong, its stock price was higher than $200/share and its enterprise value exceeded $100 billion. If the intrinsic value of a company is driven by cash flows from existing assets, value-creating growth and low risk, Valeant looked attractive on almost every dimension:

Valeant was not only delivering the value trifecta, high revenue growth in conjunction with high operating profit margins and generous excess returns, but was doing so on steroids (taking the form of low taxes and high debt). One note of caution even then, though, was that the business model was built on an architecture of acquisitions, with acquisition accounting playing a large role in pushing up operating profitability and lowering taxes.  If you were unfazed by the acquisition accounting effect and assumed that the company could continue to deliver this combination going forward, the value per share that you would have obtained for the company would have been more than $200/share.
In estimating the value, I did lower the compounded revenue growth for Valeant to 12% for the next ten years, but that translates into revenues more than tripling over the decade.

From Star to Cash Cow

While many trace Valeant's fall to September and October of 2015, when short sellers launched an assault on its links to Philidor, an online pharmacy, the business model was already under pressure in the months prior, a victim of its own financial success. The model was designed, in my view, to operate under the radar, since key parts of it (the drug pricing and acquisition accounting) would wither under exposure. While much of what Valeant did in 2010 and 2011, when the company was not a household name, went unnoticed, its actions in 2015, when it was a higher profile company, drew attention from unwelcome sources. The company's acquisition of Salix increased the scrutiny, both because of it's size and partly because the Salix drugs that Valeant acquired (and repriced) affected more people (and drew more complaints). The Philidor revelations pushed these concerns into hyperdrive and the stock lost almost 55% of its value in September and October, dropping from $180/share to $80/share.

In my November post, I rehashed much of this story and argued that even if Valeant were able to survive legal and regulatory scrutiny, the company would never be able to return to its old business model. In effect, even in the absence of more bad news, Valeant would have to be run like other pharmaceutical companies, reliant on R&D, rather than acquisitions, for (more anemic) growth. Removing the debt-funded acquisitions and the drug repricing  from the business model yielded a company with lower revenue growth (3% a year, rather than 12%), lower margins (a pre-tax operating margin of 43.66%, instead of 49.82%) and higher taxes (with an effective tax rate of 20% replacing 16.51%).


Note that these numbers were reflective of more conventional drug companies and reflect a profitable, albeit slow-growth business. With these numbers, though, the value per share that I obtained for Valeant was about $77, down substantially from its star status, but the market price, at $82, was higher.

From Cash Cow to Dog?
If there were dark clouds on the horizon for Valeant in November 2015, the months since have only made them darker for four reasons:

Without financial disclosures from the company, a management that seemed to be making up stuff as it went along and the possibility of a debt covenant being triggered, it is not surprising that the market marked down Valeant’s stock price further: 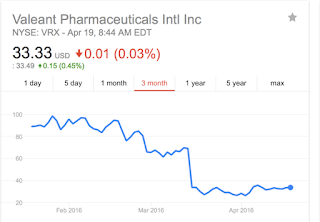 This price collapse, following last year’s swoon, has reduced the market capitalization of the company to $11 billion, almost 85% lower than its value a year prior. In late March 2016, the company announced that Michael Pearson would be stepping down as CEO, the clearest sign yet that there will no return to the old business model, and Bill Ackman increased his involvement of the company in a bid to preserve what was left of his investment in the company and more importantly, his reputation as a savvy activist investor.


With the stock trading at $32, the question of whether the stock is a good buy now looms large. Compared to my November 2015 estimate, the answer is an emphatic yes, but the caveat is that a great deal has happened to the company’s fundamentals during the last six months that could have shifted the value down significantly. The problem that I face, like any other investor in Valeant, is that in the absence of financial filings, there are no numbers to update. The solution seems simple. Wait for the delayed filing to come out in late April, early May or later, and use that updated information in my valuation. That is the low-risk option, but I think that it is also a low return option, since if the filing contains good news (that revenues have held up and profit margins remain healthy), the stock price will adjust before my valuation does. The alternative is scary, but it has a bigger payoff. I could try to make a judgment on Valeant’s value now, before the information comes out, and follow through by buying or selling the stock. In arriving at this value, here are some of the adjustments that I chose to make:
Since I had already assumed that the existing business model was dead in my November 2015 valuation, I don't see any need to lower revenue growth further or to raise the effective tax rate. The value that I obtain with these updated numbers is below:
The value per share that I obtain for Valeant is $43.66, higher than the stock price ($32) at the time of this analysis. That value, though, is clearly a bet on what the delayed financials will deliver as a surprise. One way to measure the exposure that you have to this risk is to measure value as a function of how much of a revenue and earnings surprise you get from the report:

Is there a chance that the earnings report could contain news that make Valeant a bad investment at $32? Of course, and you will have to make your own judgment on that possibility, but based upon my priors (uninformed though they might be), it looked like a good investment at $32, late last week, and I own it now.

I am sure that Valeant will be used to draw many lessons and I will extract my share in future posts about acquisition accounting, activist investing and corporate finance. The first is that acquisition accounting is rife with inconsistencies and plays into investor biases and preconceptions about companies. The second is that cookbook corporate finance, with its dependence on metrics and magic bullets, can have disastrous consequences when it overwhelms the narrative. The third is that activist investing, notwithstanding its successes, has two weak links: concentrated portfolios and investors who can become too wedded to their investment thesis.   I will continue to draw on Valeant as an illustrative example of how quickly views on a company and its business model can change in markets and why absolutism in investing (where you know with certainty that a business model is great or awful, that a stock is cheap or expensive) is an invitation for a market takedown.

Posted by Aswath Damodaran at 9:19 AM 30 comments: Links to this post