Groupon Gloom: Deal of the day or Death Spiral?

In keeping with this week's theme of revisiting ghosts of valuations past, I decided to take a look at another fallen angel, Groupon. The stock has collapsed to $4.44 from its post-IPO high of $29 and investors and employees seem to be fleeing from the exits. If you are a contrarian with a strong stomach, it would like the stars are aligned for some bottom fishing but is Groupon a buy, even at this discounted price?

To make this assessment, I decided to take a look at my posts on Groupon from last year: 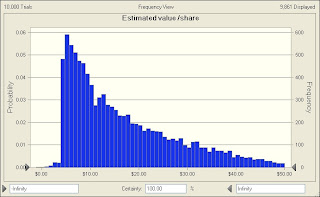 A year later, it is clear that I under estimated how quickly any competitive advantages that Groupon's first mover status gave them would be eroded. This is clear not only from perusing my email box every morning (and removing the dozen emails from different deal-of-the-day purveyors) but also in Groupon's financial results. As the most recent earnings report makes clear, revenue growth has slowed, profitability has lagged and the stock price collapse is in reaction these changes.

As I revisited my valuation, as with Facebook, I had to caution myself not to overreact, but the news, as I see it, is far more dire for Groupon than it is for Facebook. While Facebook's results were disappointing in terms of converting potential to profits quickly, the potential (from their vast user base and the information they have on these users) still remains. In Groupon's case, where the business model was clearer at the time of the IPO, the business model has collapsed and it is difficult to see what the company can do to set itself apart from the competition and make money at the same time. As a result, the changes I made in my Groupon valuation are more dramatic than the changes I made in my Facebook valuation. My base year numbers reflect their most recent quarterly filing, with trailing 12-month revenues of $1.965 billion and operating income of $71 million. My forecasted revenue growth rate is 25% (leading to revenues in 2022 of $10.3 billion, as contrasted with my earlier forecast of $25.4 billion), my target margin is 12% (down from my year-ago estimate of 23%) and my sales/capital ratio is now down to 1.25 (from a year-ago estimate of 2.00). The end result is a value per share of $4.07, which makes the stock, at best, a fairly priced stock. In fact, if you bring in the likelihood that the firm may not make it through its growth pains in the spreadsheet, the value per share drops even further. As with the Facebook valuation, you can download my spreadsheet and put your own estimates in... I have a shared Google spreadsheet for those of you who want to share your numbers...

There are two broader point that are worth making here.

Posted by Aswath Damodaran at 9:36 PM

Dear Prof: the common link in your overvaluing Groupon and Facebook is that you are only looking at their financials and ignoring their fundamentals.

In brief, the typical internet user is getting pounded by advertising of all sorts whether or not they are interested in such. This category of advertising is called "demand generation" and covers the ads delivered by Facebook, Groupon, Yahoo. The user is overwhelmed and is tuning out anything that is not relevant. Mobile devices with smaller screens drives the user to scream for even more relevance. As a result, there is a secular decline in all stocks related to "demand gen" advertising.

Demand fulfillment on the other hand, where the user expresses explicit intent via entering a search term is growing. Companies such as Google, Amazon and Ebay fit this category. Their stocks are enjoying growth and will dominate in the coming years.

You may be right about the internet user but all fundamentals are financial... the only reason you care about them is because they affect revenues and margins and returns..

It is true that all fundamentals manifest themselves in the financials eventually. And that financials across multiple companies provides insight into sectors as a whole.

But is also true that fundamentals get obscured in the financials when companies have huge amounts of private capital pumped into unsustainable business models and then dumped on the public markets.

You are dead on about Groupon, which is a call center business disguised as a consumer internet company. There is no scale effect to their economics, they grow by hiring more people to dial for listings.

Totally respect the methodological & thoroughness of Prof's work on the valuation.. it just shows I still have much to learn! ;-)

If we bring our mind back however to definition of fundamental of business, which is the products/services and business model etc.. we could have foreseen that this could be a big waste of everyone's time & effort AND money..

as a nobody like me already said the business model was 'not broken' but "not sustainable" ever since it launched and first blogged about it back in 2010 and predicted them will not exist by 2015.. ( My response & prediction peHUB Depressing Thoughts About Groupon’s Model http://bit.ly/T8jyMf ), seems like I was wrong, their end might arrive sooner than that.. ;(

there is a fundamental structural & supply problems of the capital market, which is the smoke screen & quality and timeliness of the business critical information.. we need a solution..

Prof, I am guessing you meant August 2008 to October 2008 to be the period when you revised the intrinsic values of firms that you tracked..

Great read and thanks for sharing your knowledge

The discussion about fundamentals is truly interesting. Some operational indicators or strategic assessments can be leading indicators that are hard to express in percentage points.

Let's illustrate using Groupon. I have summarized Groupon as follows "If giving 70% discounts is a bad idea for a merchant, then a business that helps executing that bad idea faster is probably a bad idea too".

The facts seem to suggest there is merit in this assessment. But it is hard to translate into a spreadsheet, but rather, used as a filter before you start looking at the financials.

Pieter,
The problem with filters is that they can shut out good investments. Let me use Groupon as my analogy. By your measure, Groupon will never be a good investment. I do think that any stock can be a good investment at the right price. Thus, if I could buy Groupon at $1.50/share, I would.... So, screening is good but the nuts and bolts of valuation still matter.

Prof, I disagree with your statement that "any stock can be a good investment at the right price." Businesses that are not sustainable are not good investments at any price, e.g, pets.com.

That is true only for businesses that have a value of zero. I am afraid that is an extreme position and applies to a very small subset of companies. Most businesses have some value. The question is what that value is... and whether you can buy it at a price lower than that value.

UK dealsYou may be right about the internet user but all fundamentals are financial... the only reason.they can good business and good investment at any price

Prof, here is my post on the fundamentals. Will show up in the financials eventually :)
http://pandodaily.com/2012/08/28/what-ails-groupon-yahoo-and-facebook-demand-generation-advertising/

Hey People,
"Groupon Gloom: Deal of the day or Death Spiral?"
The actual amazement found in this article makes me want to visit your site more often! Thanks.

No wonder why you get so many feedbacks
sydney deals

Clearly groupon is still way overvalued the prospects for the company do not seem very great yet its amazing how investors can find a justification for the high valuation for a stock that they like such as groupon.

This is a quality content, marvelous story you had presented. I also went through different posts those were also with full of authentic information provided by you. This topic was very sticky and touchy one.

I think most of the peoples are getting good knowledge from your blog, so it will easily to reach the correct market place.

I liked your article, I am inspired by your words you quote in your articles. Even I try my best to write the way you do in your writings.