In my post on corporate breakups, I looked at the value and price consequences of breakups. Since that post was triggered by the news stories about HP and eBay splitting themselves, I though it would make sense to put those companies under the microscope, to see if they are good, neutral or bad candidates for the breakup story. In this post, I will focus on Hewlett Packard, a company with a long and rich history as a technology company, that has been a case study on bad corporate governance, the dangers of overpaying for acquisitions and the perils of bad accounting for the last few years.

HP: From a bad past to a better future?
The last decade has not been a good one for Hewlett Packard. During the period, the company has not only seen its core businesses (computers, printers, business services) come under assault but it has also had self-inflicted wounds from corporate governance failures and terrible acquisitions. I posted on one of those failed acquisitions (Autonomy) a while back and you can read the post here.

Meg Whitman, who made her reputation by building up EBay, joined the board of directors at HP in 2011 and became CEO in September 2011, with the promise that she would turn the company around. Ironically, she was instrumental in rejecting an earlier plan to break up the company, arguing that the company was “better together”.  In the last three years, Whitman has toiled with mixed results on both the profitability and the stock price front. HP’s revenues have declined in the last three years and its margins are under pressure:

The net loss in 2012 reflected the write off of their ill-fated Autonomy acquisition. HP’s stock price has reflected this turmoil, dropping in 2011 and 2012, before making a recovery in the last year and a half: 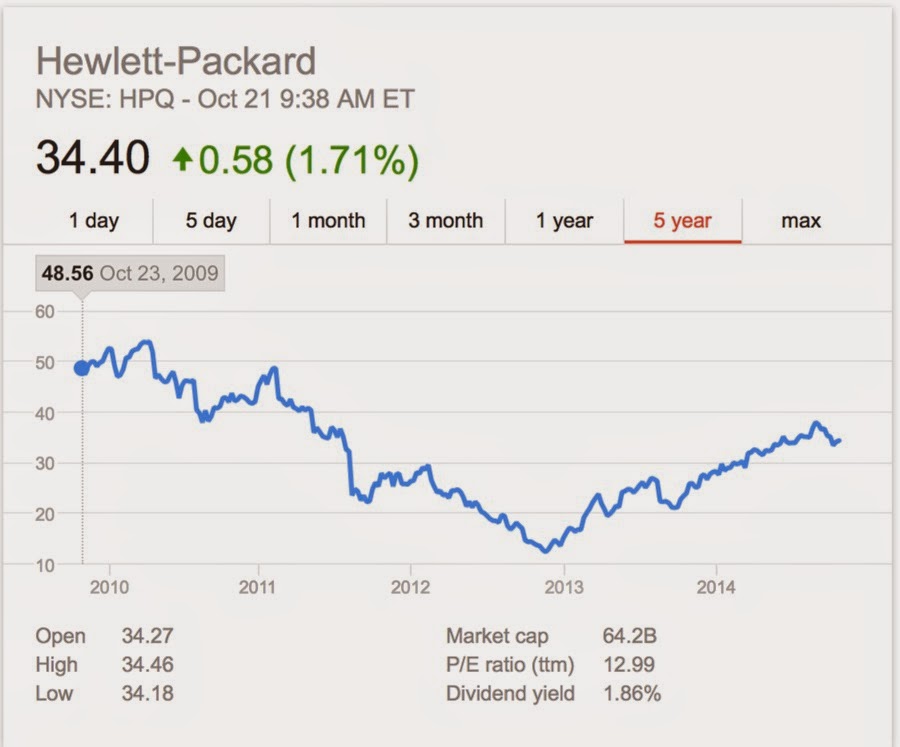 You can get HP’s latest annual report, 10K and 10Q, as well as a summary of the company’s financials over time.

In early October, HP announced that it was planning to break itself up into two companies, one containing the computer and printer businesses and the other incorporating business services and its financial arm. The official announcement (or at least presentation) that HP made about the break up is here. In the presentation, HP provides the broad details of the two businesses:
Note that the combined operating income for the two businesses in the last twelve months ($11.4 billion) exceeds the operating income for HP as a consolidated company ($8.6 billion) by about $2.8 billion. The footnote suggests that this does not include corporate investments (I assume that this refers to unallocated corporate costs) and seems to leave the impression, intended or not, that these costs will disappear after the break up.

Valuing the Break up
In my post on valuing the effect of a break up, I argued that there were two questions that needed to be answered. The first is an assessment of the effects of the break up on cash flows, growth and risk and the resulting effect on value. The second, and just as important, step is deciding on why the company needed to break up to accomplish these changes:
a. The Value Effect
In the table below, I do fairly simple (and simplistic) valuations of HP as a consolidated company and the broken up pieces: 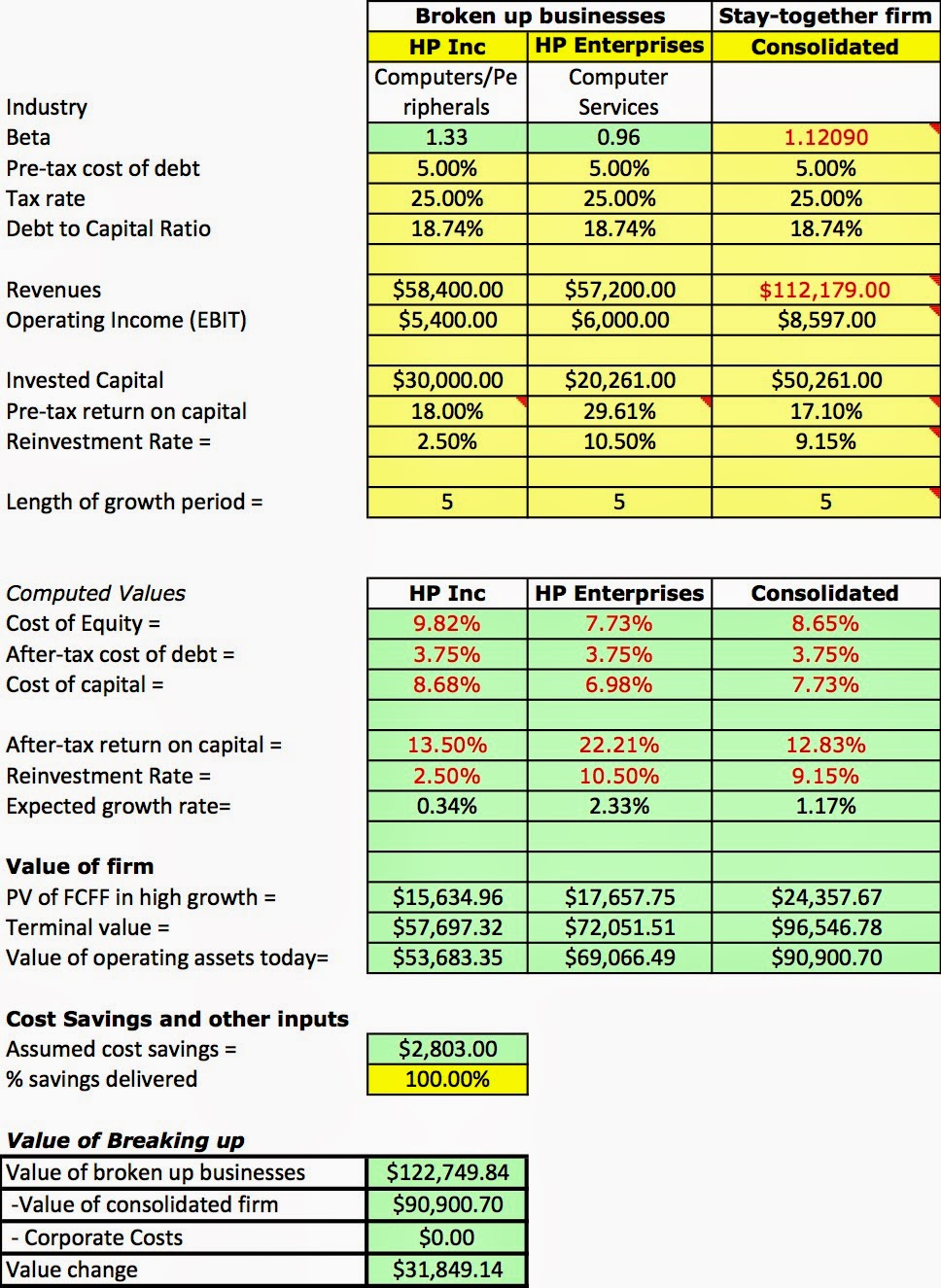 Note that the broken up businesses reflect the characteristics of the consolidated company with low growth and reinvestment, but the broken up units have a value that is $31.85 billion higher than the consolidated company. Magical, right? Before you get too excited about the value creation, almost all of the value addition here comes from the upfront assumption that the operating income of the pieces will be $2.8 billion higher than the consolidated company’s income. If you believe that HP has $2.8 billion in annual operating costs that are truly wasteful, the break up will add value, but only if the break up is a prerequisite for the cost cutting to happen.In this final part, that is the question that I explore by looking at what the value increase will be as a function of how much of the $2.8 billion will really be cut and how much is mirage that will manifest at the new HP pieces. To estimate the effect, I considered different estimates of the cost savings and the impact on value. Thus, if there are no cost savings, the value change goes to zero and as the cost savings increase as a percent of $2.8 billion, the value effect of the breakup also increases:

You can check for yourself, by downloading the spreadsheet that I used and tweaking or changing the numbers that you think I got wrong.

b. The need for a break up
Even if we take HP at its words and accept their argument that the break up will lead to significant cost cuts and lay offs, the question is why these cost cuts and layoffs cannot be carried out by the consolidated firm. Looking at the possible explanations, I don't see any of them holding up to scrutiny:
In summary, even if HP is right about the potential for cost cuts in the company, the break up seems to be an elaborate and unnecessary mechanism to make it happen.

Pricing the Break up
As I noted in my earlier post, the motivation for a break up may have nothing to do with value and everything to do with price. By breaking up, a company may find itself priced more highly because investors reprice the parts to yield a higher aggregate value than the consolidated company. Revisiting the reasons for this repricing, I am hard pressed to find a good one:
There is a cynical rationale for the break up, which is that it might be exploiting the laziness of equity research analysts, who like to use broad metrics (EBITDA) and the tunnel vision that they bring to their comparisons. Just to provide an illustration of the potential payoff, I looked at repricing HP's units, using the median revenue and EBIT multiples of the sectors that I thought they best fit in:

Do I believe that HP's price will triple if they break up? Not for a moment, but I would not blame HP's management for trying to play this game, where they hold forth the most desirable operating metric for each unit (revenues, EBITDA, EBIT) and push analysts towards the sector that delivers the highest multiple of that operating metric. I don't think it will work because HP is being priced as a no-growth, declining-margin company now and breaking it up into two no-growth, declining-margin companies does not change the calculus.

Bottom line
Your assessment of this break up boils down almost entirely to whether you think that there will be cost savings from the break up and how big and lasting those savings will be. I am skeptical. I think that the company is over estimating its capacity to cut costs, finesse capital structure and grow in the future and I am afraid that it is carrying bad (value destructive) habits with it into the new ventures. I am also unclear about why there has to be a breakup of the company for their cost savings to manifest themselves. I don't see a significant potential for a pricing correction from the break up, either, since there are no radical differences between the two units and very little clarity added by the break up.

Skeptical about HPs cost savings arguments. Two companies will need two of everything - HR department/ and the like and there may be some reductions in economies of scale.

Better pricing by market also looks doubtful for the reasons you cite. This argument has also been used by CEOs of companies like Pfizer... But there at least the cash flows from their generic products are steady and the risk and reward for research driven products is much more volatile.

Still a split may create some value in the end. Both businesses will be smaller and easier to run and manage. Each segment may get more focus and attention as independent companies than in a confused conglomerate. Long odds for sure but better odds than cost savings or more accurate pricing by the market

Both business separated could be easier to manage, achieving better margins and growth rates in the long term, even with bigger management expenses.
If the bottom line is positive, the market will consider the break up positive too.