HP is one of a multitude of companies that has overpaid on acquisitions, and like those other companies, it cannot claim that it lacked outside advice and guidance. In fact, HP paid $30.1 million in advisory fees to Perella Weinberg and Barclay’s Capital for guidance on how much to pay for Autonomy and whether the deal made sense. So why did they not spot the accounting manipulation or recognize that synergy would be elusive? In general, why, if acquiring firms pay so much for "expert" advice, do so many deals go bad?

Conflicting roles: The answer can be seen in an imperfect analogy. Asking an investment banker whether a deal makes sense is analogous to asking a plastic surgeon whether there is anything wrong with your face. After all, if either party says “No”, they have no business to transact and no revenues to generate. Allowing the dealmaker (the investment banker) to also be the deal analyst (provide advice on whether the deal is a good deal) is a recipe for bad deals and we have no shortage of those. The solution is simple in the abstract but transitioning to it may be difficult. The deal making has to be separated from the deal analysis. Put differently, investment bankers should do what they do best, which is to manage the mechanics of the deal, and be paid for the service. There should be a third party, with absolutely no stake in the deal's success or failure, whose job it is to assess the deal to see if it makes sense, with compensation provided just for that service. Why has this common sense change not happened yet? First, as I noted in my last post, many acquiring companies want affirmation of decisions that they have already made (to acquire), rather than good advice. Second, the same entity (say, Goldman Sachs or Morgan Stanley) cannot slip back and forth between being a deal maker on one deal and a deal analyst on another, since there will be a shared and collusive interest then in shirking the deal analyst role. You would need credible entities whose primary business is valuation/appraisal and not deal making.

The deal table: In many businesses, companies measure their success based upon market share and revenues. M&A bankers are no different and their success is often measured by where they fall in the deal table rankings. Here, for instance, is the latest deal table from Bloomberg, listing the top bankers for M&A globally, in 2011 and 2012. 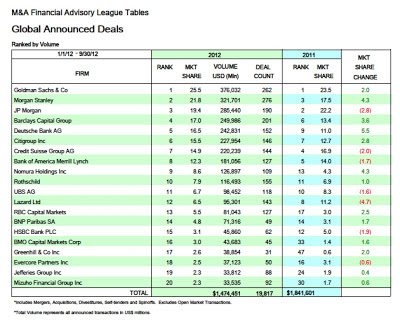 Note that the rankings are based upon the dollar value of deals done, and that there are no extra columns for good deals and bad deals. Consequently, a banker who does a $11 billion bad deal will be ranked more highly than one who does a $4 billion good deal. There are three implications that follow.
So what can we do to change this focus on deal making? We do have to begin by changing the way we compensate bankers in deals but we also have to follow up on deals. I would like to see some entity generate deal tables that track the largest deals from five years ago and report how much those deals have made (or lost) for stockholders in the acquiring firms. It would be interesting to see the list of the top 10 bankers in terms of value creating and value destructive deals.

Compensation: The third factor that contributes to the deterioration of deal advice is the way in which the deal advisors get compensated for their services. In most deals, the deal advisors get paid for getting the deal done and there is no accountability for deal performance. Neither Perella Weinberg nor Barclay’s Capital will have to return any of the advisory fees that they received for the HP/Autonomy deal, even though the advice that was offered was atrocious. I think that there is a solution, even within the existing system. Rather than tie the entire fee to getting the deal done, a significant portion should be contingent on post-merger performance. Thus, if the acquiring firm’s stock price or profitability fails to beat the peer group’s stock price performance or profitability in the years (two, three or five) that follow, the bankers will either not get a large portion of their fee or be forced to return a proportion of the fees that they have already been paid. Bankers will complain that this puts them at the mercy of  macroeconomic shifts and mismanagement of the post-merger integration, but those are variables that they should be considering when assessing whether a deal should get done.

In closing, though, acquiring firms are quick to blame bankers for bad advice. As I noted in my last post, I think that the ultimate blame has to lie with the top managers of the acquiring firms. No acquirer  is ever forced to do an acquisition at the wrong price and if they chose to do so, they should be held responsible.

I have always felt that when a company is doing Acquistions thats a sign that the management of the company is more aggressive when it comes to growth. Companies that are more diverse have less exposure to anyone sector they are protecting their shareholders. Take a company thats in the consumer food business but their also in the candy business their also in the vitimin and herbs business. Their in the health foods business on a small scale though a small chain of retail stores. Their also in the dog and cat food business and food for small animals business. Their also in the food for birds and fish business. Their in the equine food business equine means horse. While anyone of these sectors may be doing very well another sector may be doing ok while another sector may be doing poorly so things even out as it were. Look what happens to a company thats to concentrated in one narrow sector. All the divisions of the company that I just outlined are food related yet their diverse. The point of a good company is to grow the firm while not taking on to much risk. As long as a company does not have to rely to much on borrowing to grow their business through acquistions than wise Acquistions are a great way to grow a business.

Another excellent addition to the series.

I had one thought which I will try to look into, but will posit here first. Is there any evidence that acquisitions tend to be undertaken by companies that are either mature or entering decline?

My concern is that deal advisors -- particularly on the valuation side -- would be weary to accept a compensation structure contingent on relative performance to a company's peer group since the deal itself may be a 'defensive' move in anticipation of that same peer group's outperformance and subsequent encroachment on the buyer's market share.

Sorry for that wordy sentence ...

Jason,
Two excellent points. First, it is true that larger, more mature firms are more likely to begin acquisitions, especially as their conventional sources of growth dry up. Second, I am a bit of a skeptic when it comes to defensive acquisitions, i.e., acquisitions that are aimed at reducing the rate of decline rather than for growth. If this is the only way you can stay in business, your stockholders will be better off if you get out of the business.

This post applies to the seller as well as the buyer. The Dragon-Lernout & Hauspie fiasco provides this sobering quote from the Goldman Sachs lawyer who is being defended against the claim of breach of fiduciary duty:


"There is no question that Dragon and its stockholders were also defrauded," said John Donovan, an attorney with Boston law firm Ropes & Gray, in his opening remarks defending Goldman in the civil suit. "Goldman's job was not to detect fraud. When you hire a banker, you ask it to do certain things but delving into the books, doing accounting and finding fraud is not one of them."

Of course the plaintiffs can no longer sue the deal "accountant" Arthur Andersen.

I would be interested to hear your thoughts re: the value of fairness opinions because, as you know, many large transactions will include at least one independent third-party opinion (often times valuation firms/divisions rather than investment bankers). Do these opinions address any of your concerns? Thanks for the interesting posts.

To be honest, I think a fairness opinion is useless. It provides legal cover. To the extent that it might not need to be defended in court, it requires the valuation to be at least legally defensible (though that does not come close to being economically defensible).

Prof. It would be a little difficult to set adivsor's fees contingent upon the firm's success.

Usually, advisor would say that the fair price is say, $100 based on present assessment of business, likely risk and macro factors and management ability.

Why should advisor be penalized for factors beyond his control?

In fairness, the only solution to this issue is that the price assessed by the advisor should be reviewed, analyzed and accepted/rejected by the management and the board. If CEO and board are not capable of this, the shame is on them, not on the advisor.

After all it is caveat emptor - buyer beware.

In fact,if the acquirer has good in-house finance team, good CEO and good corporate governance, advisor is not required. Instead, a deal maker is all that is required.

Deal advisors are out there to make money come what may. It is best to ignore them; deprive them of business.

So what you are suggesting is a ratings agency for deals instead of security instruments. I bet those will never be coopted by the fee focused and much richer investment banks.

Just like Moody's and S&P were totally able to stay objective in the face of millions of dollars of fees the banks threw at them for giving out the AAA rating for a 2006 vintage, all subprime triple leveraged synthetic CDO.

Big Deal is a musical with a book by Bob Fosse using songs from various composers such as Ray Henderson, Eubie Blake, and Jerome Kern. It was based on the film "Big Deal on Madonna Street" by Mario Monicelli. mobile application development

The Info in the blog is out of this world, I so want to read more.
irs tax liens
creative real estate investing
organ tax lean sales