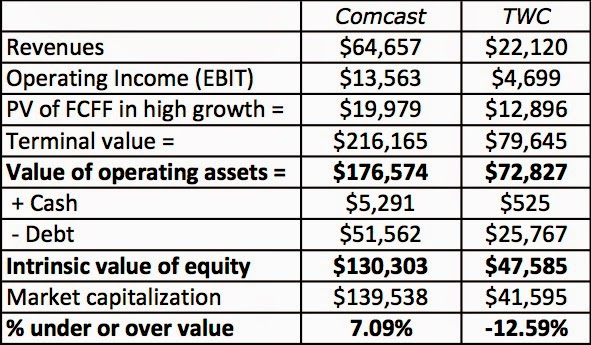 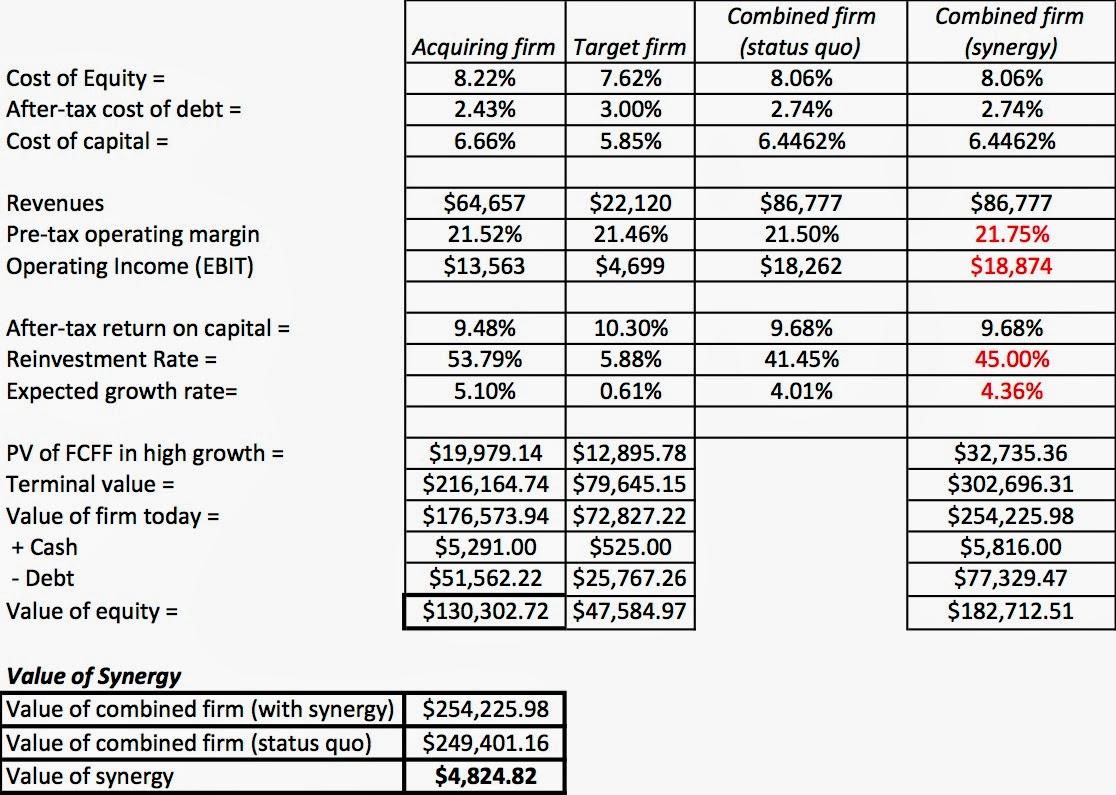 Posted by Aswath Damodaran at 5:42 PM

What about stronger negotiating power with media content suppliers? Isn't it the whole logic of the deal? Malone is pushing for a consolidation for a reason.

This post is really useful for all traders and investors of India on share market. I appreciate the effort kept by the author for publishing this post. I also request to keep posting such useful articles for option tips in the financial field. In that attempt, I also recommend to get some more information on .Investing is always a good option to increase the returns but types of investments and its methods are only known by good posts and articles like this.
Stock Tips

Anonymous,
Conceded, but no matter what the reason, it has to show up in the numbers. I think that yours is an argument for higher operating margins going forward (as content providers get squeezed). The only problem is that it is not 1990 and content providers have alternate routes to get to customers.

It would be nice if you could clarify. Thanks

Prof, my apologies, I just noticed that you have done that in (value of firm today) cell. So first query is resolved.

Could you tel me why marginal tax rate is not used in terminal value calculation?

The question is about the tax rate is a good one. The marginal tax rate in the US at the federal level is 35%. These companies already pay well above the average effective tax rate on their income and I am assuming that this is steady state at least for an effective tax rate.

Thanks Prof for the clarification. I enjoyed this post.

Professor, you might be neglecting the integration challenges and the underlying expenses of a merger of this magnitude . The amount of work that needs to transpire to consolidate systems, processes and resources across 2 big companies is never easy and is often disruptive spanning multiple years. There are transaction and integration costs that need to be accounted for not to mention the incremental risk due to typical integration issues (e.g. culture gap). More often than not, you might see a negative synergy in the first year or two as the 2 businesses are consolidated and streamlined. In my humble opinion, these are not insignificant line items and need to be accounted for in any valuation

Any chance the Comcast spins off NBC/Universal to the public?

congratulations guys, quality information you have given!!! credit repair companies

Theirs to much concentraction in media.