It is difficult to believe but its been only just over three months since Twitter went public, opening at $46/share and then continuing its climb into the stratosphere, in the weeks following. As many of you who read my posts know, my assessment of Twitter's value, prior to the IPO, was about $18/share and I believed then that  the $26/share at which the company was priced was a reach. Clearly, the market believes otherwise.


Last week did see a setback, though it may be temporary, in Twitter's climb. It came in the form on an earnings report that on its face, at least, looked like it contained good news. The company reported revenues that beat expectations and claimed to have turned the corner on profitability, at least using its own adjusted version of earnings, with positive earnings per share for the quarter. The market, though, reacted negatively, wiping out 25% of Twitter's market value in the course of a few minutes. Note, though, that even after this drop, Twitter's stock price is at $53, well above my target range for its value. In this post, I would like to first look at the news in the earnings report, and then update my valuation to reflect Twitter's first quarterly earnings report and see if value (or at least my assessment of it) has shifted. I would like to follow up with an examination of why the market price may have reacted the way it did to the information in the report.

With young companies like Twitter, a quarterly report can sometimes lead to large reassessments of value. Rather than prejudge the market reaction, it is worth breaking down the report into its component news items. Let's start with the good news:
There were some sour notes in the report as well:
More generally, the IPO and the months since have brought more general good news for the company, at least on two fronts:

Overall, my assessment of the earnings report was that it did not contain surprising news and that the news that it did contain affirmed the difficulties of scaling up. Twitter is a small company, when it comes to revenues, and it was able to grow at a prodigious rate. It is, however, a large company when it comes to its user base and growth was slower.

Twitter Valuation: Then and Now
I went back to October 27, 2013, when I did my pre-IPO valuation of Twitter. Rather than reproduce the entire valuation, I have the picture of the valuation below: 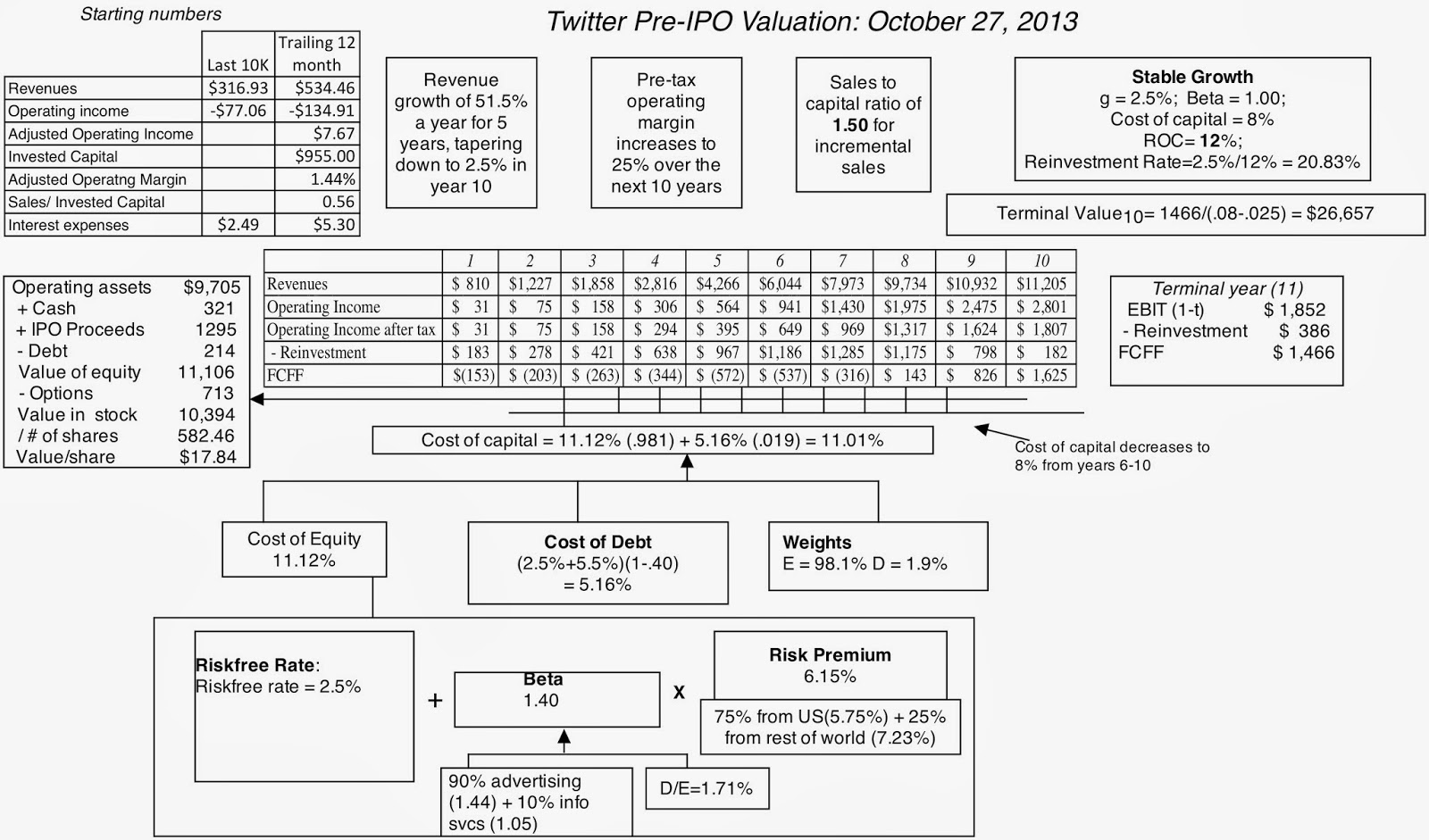 My assessments of the overall value of equity of $11.1 billion and the value per share of $17.84 are driven by two key assumptions: that revenues will grow over the next decade to $11.2 billion and that operating margins will improve over time to 25%. You can download the spreadsheet by clicking here.

Given the earnings report and the other developments since the IPO, I revisited my assumptions.
Adjusting the number of shares outstanding to 555.2 million, to reflect adjustments after the IPO, we arrive at the following: 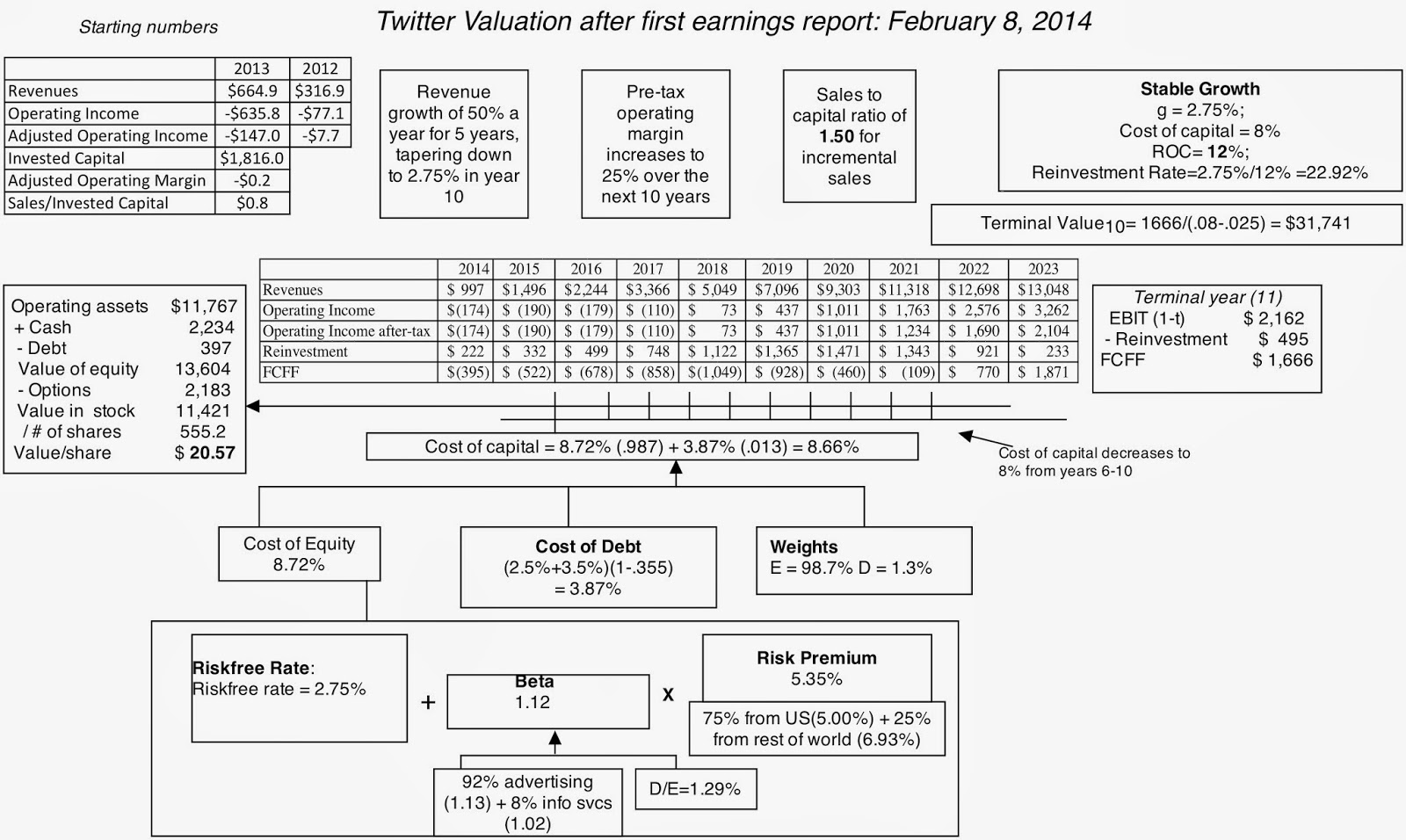 The updated equity value of $13.6 billion is about 23% higher than the value in the IPO valuation but the value per share of $20.57 is only 15% higher than the estimated value per share of $17.84 in the IPO valuation. One reason is that the options outstanding in the company, with an average exercise price of $1.84, are now worth a great deal more at today's stock price, representing a drain in value to common stockholders. You can download the spreadsheet by clicking here. As always, these are just my estimates and yours may be very different. You are welcome to change the numbers in the valuation and come up with your own conclusions. Once you have done so, please enter your numbers in this shared Google spreadsheet.

There are paradoxes aplenty in the pricing and valuation of Twitter and I will not even claim to be able to understand, let alone explain them. However, I will draw on a device that I have used before and find useful to explain how markets move, which is the distinction I make between value and price. The successful IPO and the price run-up in the weeks after has made Twitter into a pricers' game, where it is mood and momentum that determines price movements, not fundamentals. The nature of this game is that it can shift unpredictably and in response to incremental or even trivial news stories. Did Twitter deserve to lose 25% of its value because its user base did not grow as strongly as expected? Perhaps not, but did it deserve to double in value in the weeks before on the basis of no real information that would lead to reassess its future as a company? I don't think so! If you are playing the pricing game, it is best not to try to explain (as many were trying to do last week) what happens to the price, using fundamentals.


Am I predicting that Twitter's stock price will drop back into the twenties? Of course, not, but I would not be surprised if it did, and if the drop was triggered by another piece of trivial news or even non-news. At the same time, I would not be surprised to see the stock double to $100/share, triggered by a different news story. I have used this analogy before but there is no harm in using it again. When uncertainty about the future is high, markets (and investors) become bipolar and predicting their behavior is a fool's game.

Posted by Aswath Damodaran at 1:56 PM

Hello Sir,
Hope you are doing great. Sir could you please elaborate on the following statement which you made in this blogpost:"While my target margin stayed at 25%, my margins in the earlier years now are much more negative. The quarterly report suggests to me that revenue growth is going to cost more than I had initial assumed and that the company will continue to report operating losses for the near term". As we know growth comes from the reinvestment by the company in either capital spending or pursuing the R&D or building the human potential. All these factors are separated from the operating expenses and thus should not in any way impact the operating margin. Then why are you saying the operating margin have to much more negative in the initial years as your expectations of the growth seems to be costlier than you expected?
Pls do reply sir

If you look at the operating loss in the last quarter, it is a staggeringly big number. That suggests that while Twitter is growing, the expenses it is incurring to generate that growth are growing even faster. That makes their starting margin much more negative than it was a few months ago. Since I change this margin over time towards my target, that gives them more negative margins in the early years.

As a long term value investor I wouldn't buy twitter simply because I don't see it ever making money in a sustainable manner. I don't think twitter was designed with monetization in mind. Their limited text string and low screen real estate on mobile devices are just a few of the things running against the company. The biggest flaw in the model is; every time they try and sell more ads, they risk a greater chunk of users going away(No value added for users to stay). My two cents...

I'd be interested in seeing an update on your Tesla analysis. (If much has changed since then.)

I guess they're another case of mood and momentum determining price?

That is if you're taking requests :-)

Just a question on your input sheet - where did the $531.36 NOL carryover come from?

I can't find such a figure in any of the data attached to this blog post.

I've recently been seduced by a valuation mechanism that seems to base itself on accounting and am not sure what to make of it. Would you please pen your thoughts on possible pitfalls, advantages and how (if at all) it differs from the mode you practise ?

I'll first put down what I know of the theory and then work out an example:
Theory:
=======
Good valuation is basically building on something comparatively concrete with minimal projections. So using the eps and book-value as the "something concrete" (subject of course to preceeding digging to make sure those are accurate and not the product of shenanigans), residual earnings are calculated.

where:
- Residual Earnings(b) = (EPS(b)/BookValue(a) - r) x BookValue(a)
(the a, b and c subscripts just indicate advancing years. a<b<c)
- r is the required rate (which I equate to the cost of equity (the much loved equity risk premium+10 year treasury rate)

Example:
========
Working this out for say Western Union (DISCLOSURE: I am preposterously long this one because I believe they have an almost unassailable moat regardless of what Bitcoin-ers think and get to keep money for free for sometime someehat like an insurance company)

This is the essence of the approach I just read about in a very detailed book and wanted your thoughts on.

Tim,
I took the NOL in the prospectus and added on the losses since. I will update it when the 10K comes ot in the next few weeks

The residual earnings model works well with nature companies and done right, it should give you the same value as a DCF. Tough to use with transitional or high growth companies

I love your last sentence. "When uncertainty about the future is high, markets (and investors) become bipolar and predicting their behavior is a fool's game."

I think the game is called craps.

Thanks very much for the response. My main trouble is a lack of confidence in the numbers, so that helps.

Theirs sort of a bubble developing in some social media stocks like facebook and twitter. All these companies really are is a way for companies to advertise their products and services. The twenty something crowd is starting to move away from facebook.

Definitely, It is an elegant and modern website about financial markets. It is very useful for us. So, I loved it. Many, many thanks to you for creating such an informative website. If you would like more information about this please visit stock market news The advantage of these stock market news is they allow for a vast amount of customization by the user. That same advantage can create a disadvantage for some users. Those users may not really know what they are looking for or what data criteria might produce a stock market news of stocks that present the highest possible probability of a successful stock trade.﻿

Hello Prof.,
you use arithmetic progression in order to average the revenue increment year by year given your percentage target. Wouldn't be more appropriate to use geometric progression or some other technique for geometric mean?

This is a valuable post with useful title that ""Incremental News, Price and Value: The Twitter Earnings Report & Market Reaction!". I really appreciate it.Very INFORMATIVE and just FANTASTIC! I was looking for the related information. Thanks a lot it is very useful for me. Would love to read some pieces on the topic.
Indian Share Market Tips