Earlier this year, I started my series on discounted cash flow valuations (DCF) with a post that listed ten common myths in DCF and promised to do a post on each one over the course of the year. This is the first of that series and I will use it to challenge the widely held misconception that all you need to arrive at a DCF value is a D(iscount rate) and expected C(ash)F(lows). In this post, I will take a tour of what I would term twisted DCFs, where you have the appearance of a discounted cash flow valuation, without any of the consistency or philosophy.

The Consistency Tests for DCF

For this equation to deliver a reasonable estimate of value, it is imperative that it meets three consistency tests:

1. Unit consistency: A DCF first principle is that your cash flows have to defined in the same terms and unit as your discount rate. Specifically, this shows up in four tests:
2. Input consistency: The value of a company is a function of three key components, its expected cash flows, the expected growth in these cash flows and the uncertainty you feel about whether these cash flows will be delivered. A discounted cash flow valuation requires assumptions about all three variables but for it to be defensible, the assumptions that you make about these variables have to be consistent with each other. The best way to illustrate this point is what I call the valuation triangle: 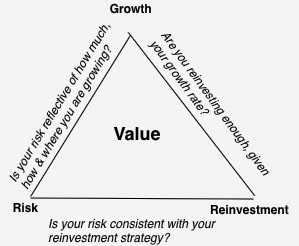 I am not suggesting that these relationships always have to hold, but when you do get an exception (high growth with low risk and low reinvestment), you are looking at an unusual company that requires justification and even in that company, there has to be consistency at some point in time.

3. Narrative consistency: In posts last year, I argued that a good valuation connected narrative to numbers. A good DCF valuation has to follow the same principles and the numbers have to be consistent with the story that you are telling about a company’s future and the story that you are telling has to be plausible, given the macroeconomic environment you are predicting, the market or markets that the company operates in and the competition it faces.


The DCF Hall of Shame


Many of the DCFs that I see passed around in acquisition valuations, appraisal and accounting  don’t pass these consistency tests. In fact, at the risk of being labeled a DCF snob, I have taken to classifying these  defective DCFs into seven groups:

DCF Checklist
I see a lot of DCFs in the course of my work, from students, appraisers, analysts, bankers and companies. A surprisingly large number of the DCFs that I see take on one of these twisted forms and many of them have illustrious names attached to them. To help in identifying these twisted DCFs, I have developed a diagnostic sequence that is captured visually in this flowchart: 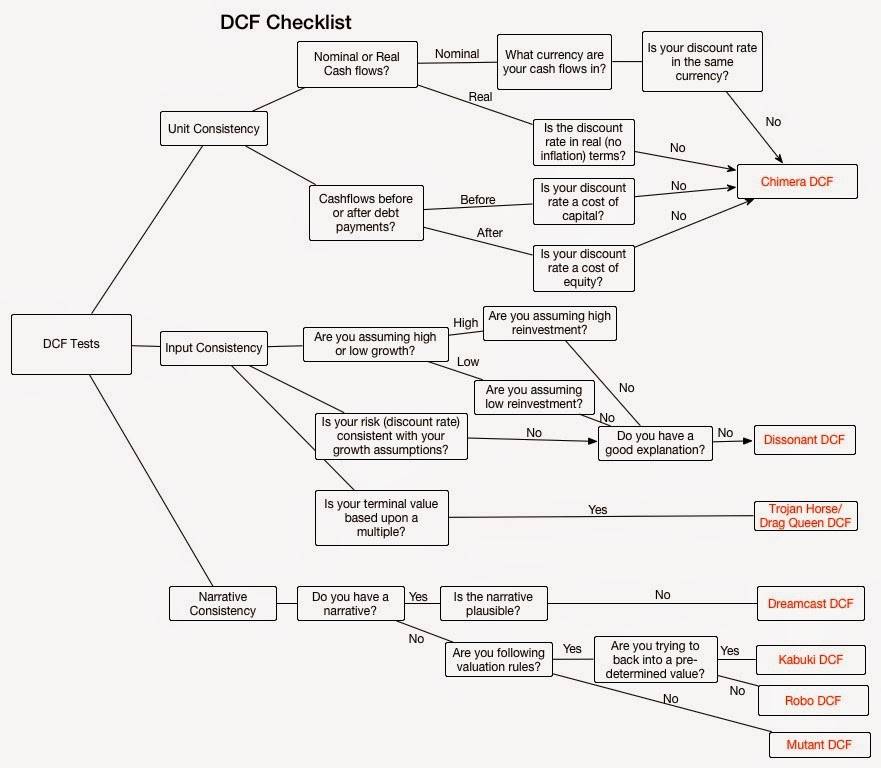 You are welcome to borrow, modify or adapt this flowchart to make it yours. If you prefer your flowchart in a more conventional question and answer format, you can use this checklist instead. So, take it for a spin on a DCF valuation, preferably someone else's, since it is so much easier to be judgmental about other people's work than yours. The tougher test is when you have to apply it on one of your own discounted cash flow valuations, but remember that the truth shall set you free!

Posted by Aswath Damodaran at 3:19 PM

In your post, you mentioned that "If your cash flows are in a specific currency, your discount rate has to be in the same currency", in which case, how would you determine an appropriate discount rate for a company that has significant amount of earnings offshore (such as MSFT or GSK), would you be looking at taking a weighted average of the WACC for each currency or use some other approach?

Dr. Damodaran,
A quick question on your statement regarding currency consistency ...

"If your cash flows are in a specific currency, your discount rate has to be in the same currency"

Lets say the firm that I am valuing is in Brazil and sells 90% of its goods in Brazil and the rest 10% in US. Do I have a choice here in which currency I value the firm. i.e. Can I convert all future cash flows of the firm to USD and use an US WACC. If so, how do I account for currency fluctuations and the entailed risk? or should I be approaching this differently. Remember I used 90% - 10% as an example .. it could as well be 50% - 50%.

Almost every company gets its cash flows in multiple currencies. You have two choices. You can pick a currency and convert all cash flows into that currency, which will require that you use differential inflation to forecast exchange rates, and discount at a cost of capital in that currency. Alternatively, you can value each currency stream separately and add up the values at the end. That will require that you estimate costs of capital in all the local currencies. Pick your poison.

I recall reading about a research study done last year that found most sell-side analysts made errors using DCF and overvalued their companies by an average of 30%? It is too hard to do.

If you really believe that equity research analysts do DCFs, you probably also believe in the tooth fairy. I think you are talking about Trojan Horse DCFs, at best, and Mutant DCFs, at worst.

hi
are there insights by VALE results today?

I dont include share buybacks as a legitimate item in "Cash Flow to Equity". If Iam a shareholder who does not sell into the buyback - I receive no cash. presumably at some point in the future I will receive larger dividends due to the reduced sharecount if any, after executive stock option exercises are netted out. So - back to dividends. I distrust any analysis that uses "cash flow to equity" rather than "Dividends" in performing a valuation exercise. For a large swath of businesses that dont pay dividends, then , the challenge is to figure out when they might do so. That is the only useful valuation exercise.

Dear Professor,
I guess what you are saying is that DCF valuation is more of an art than discipline. Having said that, your remarks about unit consistency are quite logical, however, the other two require significant judgement. Could you please share how to deal with those consistency checks from practical point of view? Which narrative is plausible, which growth rate is low or high relative to the assumed risk?

Dear Sir, Correct me if I am wrong. For terminal value to be anything other than liquidation value we are implicitly assuming that the competitive advantage of the business will last for ever i.e. there will never be perfect competition in this industry which brings the return on capital to the same level as cost of capital..is that a correct assumption ?..Kind Rgds

How well does the concept pf "optimal debt equity combination" work (i.e. the financing principle) given that in real life it is the Banks that really dictate or insist on how much equity they want you to put up for your project before they approve and give you the Debt part?

Can you please point me to any material on the internet that provides detailed instruction on how to convert a USD WACC to a Local Currency WACC.

Thanks in advance,
Richard