In my last post, I looked at the cost of capital, a measure of what it costs firms to raise capital. That capital, if put to good use by businesses, should earn returns higher than the costs to generate value. Simply put, the end game in business is not just to make money but to make enough to cover a risk-adjusted required return. In publicly traded companies, it is managers at these companies, for the most part, who are investing the capital that comes from stockholders and bondholders (or banks), and corporate governance is a measure of whether these managers are being held accountable for their investment decisions.

It is true that there are differences of opinion about how best to measure the cost of raising funds, but disagreements about the cost of capital are drowned out by disputes on how best to measure the returns that are generated by investing this capital. There are two widely used proxies for profitability. One is the profit margin, obtained by dividing the earnings by the revenues of the firm, and it can be estimated using either operating income (operating margin) or net income (net margin). Since the latter is a function of both the profitability of businesses and how much they have chosen to borrow, I will focus on operating margins and report on the distribution of both pre-tax and after-tax operating margin in the graph below:
The second measure of profitability, and perhaps the more useful one in the context of measuring the quality of an investment, is obtained by scaling the operating earnings to the capital invested in a project or assets to estimate a return on invested capital. The capital invested is usually computed by aggregating the book values of debt and equity in a business and netting out the cash. The resulting return on invested capital can be compared to the cost of capital to arrive at the excess return (positive or negative) earned by a firm. In the figure below, I look at the mechanics of the return on capital computation in the picture below. 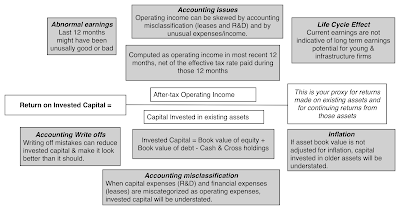 Note the caveats that I have added  to the picture, listing the perils of trusting two accounting numbers: operating income and invested capital. I did try to correct for the accounting misclassifications, converting leases into debt and R&D into capital assets, and also computed an alternate return on capital measure, based on average earnings over the last ten years. Notwithstanding these adjustments, I am still exposed to a multitude of accounting problems and I have to hope and pray that the law of large numbers will bail me out on those. 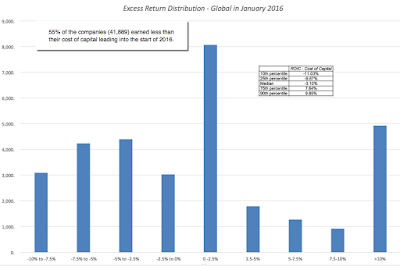 Overall, more than half of all publicly traded firms, listed globally, earned returns on capital that were lower than the cost of capital in 2015 and this conclusion is not sensitive to using average income or my adjustments for R&D and leases. The return on capital is a flawed measure and I have written about the adjustments that are often needed to it. That said, with the corrections for leases and R&D, it remains the measure that works best across businesses in capturing the quality of investments.

In the second part of the analysis, I broke down the 41,889 companies into 95 industry grouping and computed the excess returns for each industry group.  The full results are at this link, but I ranked companies based on the magnitude of the excess returns. Again, with all the reservations that you can bring into this measure of investment quality, the businesses that delivered the highest spreads (over and above the cost of capital) are listed below.

The best-performing sector is tobacco, where companies collectively earned a return on capital almost 22% higher than the cost of capital. One potential problem is that many of the businesses on this list also happen to be asset-light, at least in the accounting sense of the word, and some of these returns may just reflect our failure to fully capitalize assets in these businesses.

Looking at the other end of the spectrum, the following is a list of the worst performing businesses in 2015, based on returns generated relative to the cost of capital. 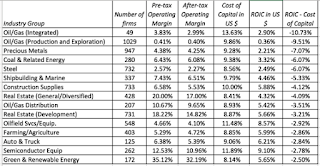 Note that oil companies are heavily represented on this list, not surprising given the drop in oil prices during the year. That, of course, does not make them bad businesses since a turning of the commodity price cycle will make the returns pop. There are other businesses that have been affected by either the slowing down of the China growth engine, such as steel and shipbuilding, and the question is whether they can bounce back if Chinese growth stays low. Finally, there are some perennially bad businesses, with auto and truck being one that has managed to stay on this list every year for the last decade, grist for my post on bad businesses and why companies stay in them.

Are firms in some parts of the world  better at putting capital to work than others? To answer that question, I broke my global sample into sub-regions and computed both operating margins and excess returns (return on invested capital, netted out against cost of capital) in each one.

Looking at the list, the part of the world where companies seem to have the most trouble delivering their cost of capital is Asia, with Chinese companies being the worst culprits and India being the honorable exception. US and UK companies do better at delivering returns that beat their hurdle rates than European companies.


Again, I would be cautious about reading too much into the differences across regions, since they may be just as indicative of accounting differences, as they are of return quality. It is also possible that some of the regions might have a tilt towards industries that under performed during the year and their returns will reflect that. Thus, the excess returns in Australia and Canada, which have a disproportionate share of natural resource companies, may be reflecting the drubbing that these companies took in 2015.

A Case for Corporate Governance

I have been doing this analysis of excess returns globally, each year for the last few, and my bottom line conclusions have stayed unchanged.
Is good corporate governance the answer to these problems? In much of the world, the notion that stockholders are part owners of a company is laughable, as corporations continue to be run as if they were private businesses or family fiefdoms, and politics and connections, not stockholder interests,  drive business decisions in others.. Even in countries like the United States, where there is talk of good corporate governance, it has become, for the most part, check-list corporate governance, where the strength of governance is measured by how many independent directors you have and not by how aggressively they confront managers who misallocate capital. Institutional investors have been craven in their response to managers, not just abdicating their responsibility to confront managers, where needed, but actively working on behalf of incumbent managers to fight off change. The sorry record of value creation at publicly traded companies around the globe should act as a clarion call for good corporate governance. In the words of Howard Beale, from Network, we (as stockholders) should be "mad as hell and should not take it any more".

Posted by Aswath Damodaran at 8:58 PM

1. The full results are at this link: Where is the link?

2. Any data that plots excess returns over cost of capital for a company with stock price returns over a 1,3,5 year period?

Well said. I worked for one of these Bad Governance companies once. It wasn't the industry - they show up in your industry analysis as on of the top 10 industries for ROIC.

The caveats on your chart for the mechanics of the return on capital computation are quite good. This company had a routine (so predictable I try trading on it) of hiding rotten assets and then gathering them all up for the 'unusual quarter'. Through accounting misclassification and the bad quarter write offs they were able to manipulate earnings and the stock price to 'aid and abet' their stock options and insider sales. As an employee we always knew the 'unusual quarter' was coming up as they would impose a ban on employee travel. If earnings were exceptionally weak before the planned bad quarter they would even ban travel by the sales force. The bad contracts, write downs of various assets (mostly acquired from customers as part of contracts dependent on financial engineering not profitability). I is important to note that management never gave up their fleet of 11 corporate Gulfstream jets, one for the CEO and one for each divisional President.

You ask how could this happen? Diffuse ownership spread across a large number of individual but mostly mutual fund owners. Relatively low employee ownership. A board pretty much established by the CEO. After two decades of subpar performance a group of Funds (still a minority) pressured the CEO to accept a board member of substantial public political clout (and highly respected by key customers in the military). After 6 months he concluded the CEO had to go but here is the kicker - the firm ended up paying $36 million to get rid of a non-performing CEO. (and that was in USD 20 years ago) Such a clear example of the lack of shareholder rights and how management can steal a company for their own enrichment.

After a couple of more CEO's who could not repair the damage the company was finally sold at no premium to another larger company with totally broken governance and incompetent CEO's - Hewlett Packard.

ROIC is not a single measure but a time series to watch and understand.

To your point that some of the "bad" businesses are a (temporary) function of the economic cycle, it would be helpful to recast your lists of "good" and "bad" businesses by tenure on the list, so we could see which in each category are perennially/truly good and bad.

I am just wondering if any special adjustments should be made when evaluating Exploration and Production company ROIC? The reason I am concern with using accounting numbers is because I believe that reserves are recorded in assets using PV10 values. Do you have any advice of how to evaluate how effective an E&P has been at allocating capital if you were doing a more detailed valuation? Perhaps looking at impairments over the past x years and adding them back into assets would help, however I am concerned that other adjustment are required to ensure consistency.

How is it possible that majority of companies and sectors are earning less than the cost of capital? So they are destroying value, in fact. How can you justify it?

Paulie,
Why would I have to justify it? I don't run these companies. After all, could you not ask the same question about active money managers, since they not only collectively but constantly fail to beat the market?

David,
You are absolutely right about exploration costs being treated like R&D. I have done this, when I look at just oil companies, and I plan to look at them again next month.

Contrarian Individual Investor,
We agree on more than we disagree.

Thanks for answer. Well, it is difficult for me to fully comprehend it, because it leads to the conclusions such as:
1) the majority of listed companies are destroying value
2) for the majority of listed companies it would be better strategy to limit its scale of operations (divestitures) rather than make capex
3) growth is most likely destroying value of the listed company
4) investors take inappropriately high risks by investing in public companies - it is more reasonable to exclude this class of investments (unless we have superior picking skills)

Are such conclusions shocking only for me? :)