Jerome Powell, the new Fed Chair, was on Capitol Hill on February 27, and his testimony was, for the most part, predictable and uncontroversial. He told Congress that he believed that the economy had strengthened over the course of the last year and that the Fed would continue on its path of "raising rates". Analysts have spent the next few days reading the tea leaves of his testimony, to decide whether this would translate into three or four rate hikes and what this would mean for stocks. In fact, the blame for the drop in stocks over the last four trading days has been placed primarily on the Fed bogeyman, with protectionism providing an assist on the last two days. While there may be an element of truth to this, I am skeptical about any Fed-based arguments for market increases and decreases, because I disagree fundamentally with many about how much power central banks have to set interest rates, and how those interest rates affect value.

1. The Fed's power to set interest rates is limited
I have repeatedly pushed back against the notion that the Fed or any central bank somehow sets market interest rates, since it really does not have the power to do so. The only rate that the Fed sets  directly is the Fed funds rate, and while it is true that the Fed's actions on that rate send signals to markets, those signals are fuzzy and do not always have predictable consequences. In fact, it is worth noting that the Fed has been hiking the Fed Funds rate since December 2016, when Janet Yellen's Fed initiated this process, raising the Fed Funds rate by 0.25%. In the months since, the effects of the Fed Fund rate changes on long term rates is debatable, and while short term rate have gone up, it is not clear whether the Fed Funds rate is driving short term rates or whether market rates are driving the Fed. 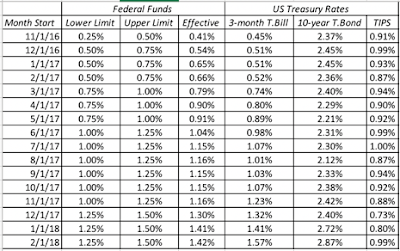 It is true that post-2008, the Fed has been much more aggressive in buying bonds in financial markets in its quantitative easing efforts to keep rates low. While that was  started as a response to the financial crisis of 2008, it continued for much of the last decade and clearly has had an impact on interest rates. To those who would argue that it was the Fed, through its Fed Funds rate and quantitative easing policies that kept long term rates low from 2008-2017, I would beg to differ, since there are two far stronger fundamental factors at play - low or no inflation and anemic real economic growth. In the graph below, I have the treasury bond rate compared to the sum of inflation and real growth each year, with the difference being attributed to the Fed effect:
You have seen me use this graph before, but my point is a simple one. The Fed is less rate-setter, when it comes to market interest rates, than rate-influencer, with the influence depending upon its credibility. While rates were low in the 2009-2017 time period, and the Fed did play a role (the Fed effect lowered rates by 0.77%), the primary reasons for low rates were fundamental. It is for that reason that I described the Fed Chair as the Wizard of Oz, drawing his or her power from the perception that he or she has power, rather than actual power. That said, the Fed effect at the start of 2018, as I noted in a post at the beginning of the year, is larger than it has been at any time in the last decade, perhaps setting the stage for the tumult in stock and bond markets in the last few weeks.

To examine more closely the relationship between moves in the Fed Funds rate and treasury rates, I collected monthly data on the Fed Funds rate, the 3-month US treasury bill rate and the US 10-year treasury bond rate every month from January 1962 to February 2018. The raw data is at the link below, but I regressed the changes in both short term and long term treasuries against changes in the Fed funds rate in the same month: 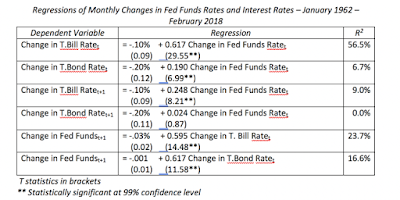 Looking at these regressions, here are some interesting conclusions that emerge:
The bottom line is that if you are trying to get a measure of how much treasury bond rates will change over the next year or two, you will be better served focusing more on changes in economic fundamentals and less on Jerome Powell and the Fed. 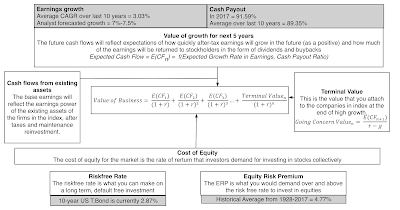 As you can see in this picture, holding all else constant, and raising long term interest rates, will increase the discount rate (cost of equity and capital), and reduce value. That assessment, though, is built on the presumption that the forces that push up interest rates have no effect on the other inputs into value - the equity risk premium, earnings growth and cash flows, a dangerous delusion, since these variables are all connected together to a macro economy.

3. Value has to be built around a consistent narrative
In my post from February 10, right after the last market meltdown, I offered an intrinsic valuation model for the S&P 500, with a suggestion that you fill in your inputs and come up with your own estimate of value. Some of you did take me up on my offer, came up with inputs, and entered them into a shared Google spreadsheet and, in your collective wisdom, the market was overvalued by about 3.34% in mid-February. While making assumptions about risk premiums, earnings growth and the treasury bond rate, I should have emphasized the importance of narrative, i.e., the macro and market story that lay behind your numbers, since without it, you can make assumptions that are internally inconsistent. To illustrate, here are two inconsistent story lines that I have seen in the last few weeks, from opposite sides of the spectrum (bearish and bullish).

While neither of these narratives is fully worked through, there are three separate narratives about the market that are all internally consistent, that can lead to very different judgments on value.

The Bottom Line
When macro economic fundamentals change, markets take time to adjust, translating into market volatility. During these adjustment periods, you will hear a great deal of market punditry and much of it will be half baked, with the advisor or analyst focusing on one piece of the valuation puzzle and holding all else constant. Thus, you will read predictions about how much the market will drop if treasury bond rates rise to 4.5% or how much it will rise if earnings growth is 10%. I hope that this post has given you tools that you can use to fill in the rest of the story, since it is possible that stocks could actually go up, even if rates go up to 4.5%, if that rate rise is precipitated by a strong economy, and that stocks could be hurt with 10% earnings growth, if that growth comes mostly from high inflation. I also hope that, after you have listened to the narratives offered by others, for what markets will or will not do, that you start developing your own narrative for the market, as the basis for your investment decisions. You've seen my narrative, but I will leave the feedback loop open, as fresh data on inflation and growth comes in, and I plan to revisit my narrative, tweaking, adjusting or even abandoning it, if the data leads me to.

Awesome post professor!! I just have one question with regards to the input (EPS to be exact) that you use in your model.

The model shows a base year expected earnings of $118.22, which differs greatly from the number according to Factset (https://insight.factset.com/hubfs/Resources%20Section/Research%20Desk/Earnings%20Insight/EarningsInsight_031618A.pdf)

Would you please clarify as to which EPS you use? Thanks