In my last post, I noted that the FANG stocks have been in the spotlight, as tech has taken a beating in the market, but it is Facebook that is at the center of the storm. It was the news story on Cambridge Analytica's misuse of Facebook user data,  in mid-March of 2018, that started the ball rolling and in the days since, not only have more unpleasant details emerged about Facebook's culpability, but the rest of the world seems to have decided to unfriend Facebook. More ominously, regulators and politicians have also turned their attention to the company and that attention will be heightened, with Zuckerberg testifying in front of Congress. That is a precipitous fall from grace for a company that only a short while ago epitomized the new economy.

A Personal Odyssey
My interest in Facebook dates back to the year before it went public, when it was already getting attention because of its giant user base and its high private company valuation. In the weeks leading up to its IPO, I valued Facebook at about $29/share, with a story built around it becoming a Google wannabe. If that sounded insulting, it was not meant to be, since having a revenue path and operating margins that mimicked the most successful tech companies in the decade prior is quite a feat.

That initial public offering was among the most mismanaged in recent years and a combination of hubris and poor timing led to an offering day fiasco, where the investment bankers had to step in to support the priced. The first few months after the offering were tough ones for Facebook, with the stock dropping to $19 by September 2012, when I argued that it was time to befriend the company and buy its stock, one of the few times in my life when I have bought a stock at its absolute low.

Much as I would like to tell you that I had the foresight to see Facebook's rise from 2012 through 2017 and that I held on to the stock, I did not, and I sold the stock just as it got to $50, concerned that the advertising business was not big enough to accommodate the players (Google, the social media companies and traditional advertising companies), elbowing for market share. I under estimated how much Google and Facebook would both expand the market and dominate it, but I have no regrets about selling too early. I did what I felt was right, given my assessment and investment philosophy, at the time.

A Numbers Update
To undersand how Facebook became the company that it is today, let's start with its most impressive numbers, which are related to its user base. At the start of 2018, Facebook had more than 2.1 billion users, about 30% of the world's population: 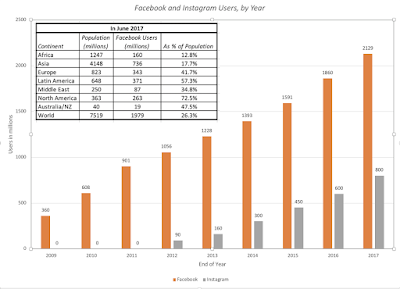 While the user numbers have leveled off in North America, where Facebook already counts 72.5% of the population in its user base, the company continues to grow its user base in the rest of the world, with an added impetus coming from the scaling up of Instagram, Facebook's video arm. These user numbers, while staggering, are made even more so when you consider how much time Facebook users spend on its platforms: 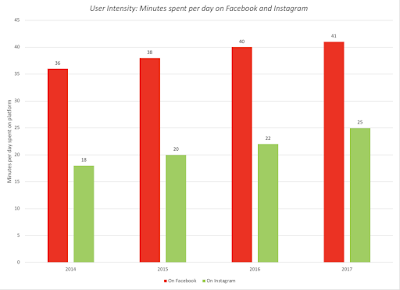 Collectively, users spent more than an hour a day on Facebook platforms, and that usage does not reflect the time spent on WhatsApp, also owned by Facebook, by its 1.5 billion users.

If you are a value investor, it would easy to dismiss Facebook as another user-chasing tech company and deliver a cutting remark that you cannot pay dividends with users, but Facebook is an exception. It has managed to to convert its user base into revenues and more critically, operating profits. 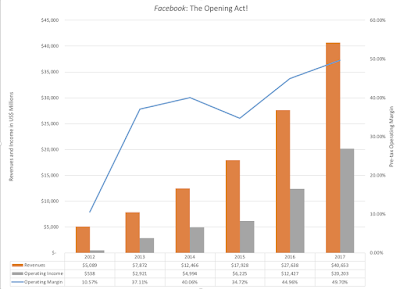 With its operating margin approaching 58%, if you capitalize its technology and content costs, Facebook outshines most of the other companies in the S&P 500, in both growth and profitability: 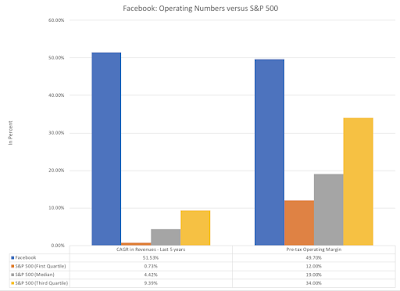 What makes Facebook's rise even more impressive is that it has been able to deliver these results in a market, where it faces an equally voracious competitor in Google.

In summary, Facebook has had perhaps the most productive opening act in history of any publicly listed company, if you define production in operating results. It promised the moon at the time of its IPO, and has delivered the sun. In my book on connecting stories to value, I pointed to Facebook as a company that seemed to find new ways, with each acquisition, announcement and earning report, to expand and broaden its story, first by conquering mobile and then going global. By the start of 2016, I had changed my story for Facebook from a Google Wannabe to one that would eclipse Google, with added potential from its user base. While the Facebook story has been one of business success, the company, its users and investors have been in denial about central elements in the story. Facebook's users have been trading information on themselves to the company in return for a social media site where they can interact with friends, family and acquaintances, and their complaints about lost privacy ring hollow. Facebook's strengths are built upon using the information that users provide about themselves to better target advertising and generate revenues, but Facebook and its investors have been unwilling to face up to the reality that the company's high margins reflect its use of third parties and outsiders to collect and manage data, a business practice that is profitable but that also creates the potential for data leakages. (Some of you seem to be reading into my words an implication that Facebook sells user data to third parties to generate revenues. It does not. It processes the data to make it information (its first competitive advantage), uses that information to better target advertising and generates revenues, as a consequence.)

A Story Break, Twist or Change?
If the Facebook story so far sounds like a fairy tale, there has to be a dark twist, and while Facebook's troubles are often traced back to the stories in mid-March 2018, when the current user scandal news cycle began, its problems have been simmering for much longer. Put on the defensive, after the 2016 US presidential elections, for being a purveyor of fake news, Facebook announced in January 2018, that it had changed its news feed to emphasize user interaction over passive consumption of public news feeds. That change, which led to a leveling off in user numbers and a loss of advertising revenues was not well received on Wall Street, with the stock price dropping almost 5%.

If Facebook was trying to preempt its critics with this announcement, the Cambridge Analytica story has knocked them off stride. Specifically, a whistle blower at Cambridge Analytica claimed that the company has not only accessed detailed user data on 50 million Facebook users but had used that data to target voters in political campaigns. In the three weeks since, the story has worsened for Facebook both in terms of numbers (with accessed users increasing to 87 million) and culpability (with Facebook's sloppiness in protecting user data highlighted). As politicians, commentators and competitors have jumped in to exploit the breach, financial markets knocked off $81 billion from Facebook's market capitalization. It is unquestionable that Facebook is mired in a mess and that it deserves market punishment, but from an investing perspective, the question becomes whether the loss in value is merited or not.

The worst case scenario, and some have bought into this, is that the company will lose users, both in numbers and intensity, and that advertisers will pull out. If you add large fines and regulatory restrictions on data usage that may cripple Facebook's capacity to use that data in targeted advertising, you have the makings of a perfect storm, playing out as flat or declining revenues, big increases in operating costs and imploding value. In my view, and I may very well be wrong, I think the effects will be more benign:
As I see it, the scandal will lead to lost sales in the near term, slow revenue growth in the coming years and increase costs at the company, making the Facebook story a less attractive one. My estimates of how the story changes will play out in the numbers is shown below: 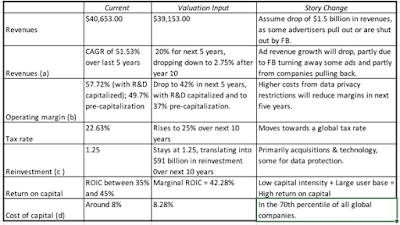 In summary, the story that I have for Facebook is still an upbeat one, albeit one with lower growth and operating margins. The resulting value is shown below:
The value per share that I obtain, with my story, is abut $181, and on April 3, the date of the valuation, the stock was trading at $155 a share. As always, I am sure that there are inputs where you will disagree with me, and if you do, you can download the spreadsheet and change the numbers that you disagree with. Some of you may be wondering why I have no margin of safety, but as I noted in this post on the topic from a while back, I believe that there are more effective ways of dealing with uncertainty that adopting an arbitrary margin of safety and sitting on the sidelines. In fact, my favored device is to face up to uncertainty frontally in a simulation, shown below:
This graph reinforces my decision to invest in Facebook. While it is true that there is a 30% chance that the stock is still over valued, there is more upside than downside potential, given my inputs. The median value of $179 is close to my point estimate value, but that should be no surprise since my distributions were centered on my base case assumptions.

Time to Buy?
Every corporate scandal becomes a morality play, and the current one that revolves around Facebook is no exception. Facebook has been sloppy with user data, driven partly by greed (to keep costs down and profits up) and partly by arrogance (that its data protections were sufficient), and is and should be held accountable for its mistakes. That said, I don't see Facebook as a villain, and I don't think that the company should be used as a punching bag for our concerns about politics and society.  I am sure that when Mark Zuckerberg delivers his prepared testimony in a couple of hours, senators from both parties will lecture him on Facebook's sins, blissfully blind to their hypocrisy, since I am sure that many of them have had no qualms about using social media data to target their voters. I hear friends and acquaintances wax eloquent about invasion of privacy and how data is sacred, all too often on their favorite social media platforms, while revealing details about their personal lives that would make Kim Kardashian blush. I am an inactive Facebook user, having posted only once on its platform, but to those who would tar and feather the company for its perceived sins, I will paraphrase Shakespeare, and argue that the fault for our loss of privacy is not in our social media, but in how much we share online. I will invest in Facebook, with neither shame nor apology, because I think it remains a good business that I can buy at a reasonable price.