Starting in the early 1990s, I have spent the first week or two of every new year playing my version of Moneyball, downloading raw market and accounting data on publicly traded companies and using that data to compute operating, pricing and risk metrics for them. This year, I got a later start than usual on January 6, but as the week draws to a close, the results of my data exploration are posted on my website and will be the basis for a series of posts here over the next six weeks. As you look at the data, you will find that the choices I have made on how to classify companies and compute metrics affect my findings, and I will use this post to cast some light on those choices.

The Data
Raw Data: We live in an age when accessing raw data is easy, albeit not always cheap, and the tools to analyze that data are also widely available. My raw data is drawn from a variety of sources, ranging from S&P Capital IQ to Bloomberg to the Federal Reserve, and there are two rules that I try to follow. The first is to be careful about attributing sources for the raw data, and the second is to not undercut my raw data providers by replicating their data on my site, if they have commercial interests.
Data Analysis: Broadly speaking, I would categorize my data updates into three groups. The first is macro data, where my ambitions tend to be modest, and the only numbers that I update are numbers that I need and use in my valuation and corporate financial analysis. The second is business data, where I consolidate the company-level data into industry groupings, and report statistics on how companies invest, finance their operations and return cash (dividends and buybacks). The third are my data archives, where you can look at trend lines in the statistics by accessing my statistics from prior years.

A. Macro Data
I am not a market timer or a macro economist, and my interests in macro data are therefore limited to numbers that I cannot easily look up, or access, on a public database. Thus, there is no point in my reporting exchange rates between major currencies, when you have FRED, the Federal Reserve site , that I cannot praise more highly for its reach and its accessibility. I do report and update the following:
With macro data, it is generally good practice in both corporate finance and valuation to bring in the numbers as they are today, rather than have a strong directional view. So, uncomfortable though it may make you, you should be using today's risk free rates and risk premiums, rather than normalized values, when valuing companies or making investment assessments.

The sample: All data analysis is biased and the bias starts with the sampling approach used to arrive at the data set. My data sample includes all publicly traded companies, listed anywhere in the world, and the only criteria that I impose is that they have a market capitalization number available as of December 31, 2019. The resulting sample of 44,394 firms includes firms from 150 countries, some of which have very illiquid markets and questionable disclosure practices. Rather than remove these firms from my sample, which creates its own biases, I will keep them in my sample and deal with the consequences when I compute my statistics. 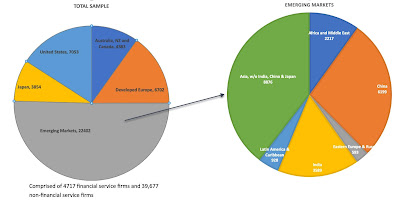 While this is a comprehensive sample, it is still biased because it includes just publicly listed companies. There are tens of thousands of private businesses that are part of the competitive landscape that are not included here, and the reason is pragmatic: most of these companies are not required to make public disclosures and there are few reliable databases that include data on these firms.
The Industry Groupings: While I do have a (very large) spreadsheet that has the data at the company level, I am afraid that my raw data providers do not allow me to share that data, even though it is entirely comprised of numbers that I estimate. I consolidate that data into 94 industry groupings, which are loosely based on the industry groupings I created from Value Line in the 1990s when I first started creating my datasets. To see my industry grouping and what companies fall into each one, try this dataset. As you look at individual companies, there are two challenges that I face. First, there are companies that are in many businesses and I classify these companies into the industry groups from which they derive the most revenues. Second, some companies are shape shifters when it comes to industry grouping, and it is unclear which grouping they belong to; for a few high profile examples, consider Apple and Amazon. There is little that I can do about either problem, but consider yourselves forewarned.
The statistics: My interests lie in corporate finance and valuation and selfishly, I report the statistics that matter to me in that pursuit. Luckily, as I described it in my post a few weeks ago, corporate finance is the ultimate big picture class and the statistics cover the spectrum, and I think the best way to organize them is based upon broad corporate finance principles:
If you are interested, you will find more in-depth descriptions of how I compute the statistics that I report both in the datasets themselves as well as in this glossary.
The timing: I use a mix of market and accounting data and that creates a timing problem, since the accounting data is updated at the end of each quarter and the market data is updated continuously. Using the logic that I should be accessing the most updated data for every item, my January 1, 2020, updated has market data (for share prices, interest rates etc) as of December 31, 2019 and the accounting data as of the most recent financial statement (usually September 30, 2019 for most companies). I don't view this an inconsistent but a reflection of the reality that investors face.

C. Archived Data
When I first started compiling my datasets, I did not expect them to be widely used, and certainly did not believe that they would be referenced over time. As I starting getting requests for datasets from earlier years, I decided that it would save both me and you a great deal of time to create an archive of past datasets. As you look at these archives, you will notice that not all datasets go back in time to the 1990s, reflecting first the expansion of my analysis from just US companies to global companies about 15 years ago and second the adding on of variables that I either did not or could not report in earlier years.

The Rationale
If you are wondering why I collect and analyze the data, let me make a confession, at the risk of sounding like a geek. I enjoy working with the data and more importantly, the data analysis is a gift that keeps on giving for the rest of the year, as I value companies and do corporate financial analysis.

If you are wondering why I am sharing the data, let's get real. Nothing that I am doing is unique, and I have no secret data stashes. In short, anyone with access to data (and there are literally tens of thousands who do) can do the same analysis. I lose nothing by sharing, and I get immense karmic payoffs. So, please use whatever data you want, and in whatever context, and I hope that it saves you time and helps you in your decision making and analysis.

The Caveats
The last decade has seen big data and crowd wisdom sold as the answers to all of our problems, and as I listen to the sales pitches for both, I would offer a few cautionary notes, born out of spending much of my life time working with data:
I respect data, but I don't revere it. I don't believe that just having data will give me an advantage over other investors or make me a better investor, but harnessing that data with intuition and logic may give me a leg up (or at least I hope it does).

Links
Posted by Aswath Damodaran at 8:32 AM