Since the banking crisis of 2008, neither fiscal nor monetary policy has proved up to the task of rejuvenating the US economy. The Federal Reserve, in particular, has explored almost every tool in its arsenal to increase economic growth. In 2009, there was Quantitative Easing II (QE II), where an influx of $ 600 billion was used to buy long-term bonds and lower long term interest rates. Those lower rates, it was argued, would help get housing back on track and increase real economic growth. At the time, I argued (though I admitted my limited credentials to be involved in this debate) that I did not think it would work, for the simple reason that interest rates were already low, with the 10-year T. Bond rate at 3.3%.

Two years later, the 10-year T. Bond rate stands at 2.09% and treasury bill rates are close to zero. The Fed is now planning to get back into the game with a maneuver that it has last tried in 1961: Operation Twist. Simply put, here is what the Fed hopes to do. Rather than introduce more funds into the system (like QE2 did), Operation Twist is a shift in what securities the Fed invests in, rather than how much. The Fed, which holds about $1.7 trillion of US treasuries is planning of reducing its purchases of short term treasuries (1 month, 3 month etc.) and increasing its holdings of long term treasuries (10 years and higher). Assuming that the rest of the market stays in a holding pattern, the increased demand for long term bonds should lower those rates, while the rate for the short term notes and bills will increase.

Now, let’s look at the why. There seem to be three stories offered:  an “interest rate” story, where real growth will increase as a consequence of this maneuver, a “confidence” story, where US companies and consumers will be heartened by the Fed’s activism and and a “valuation” story, where stock prices will react favorably to the shift in the term structure:
Nice stories, but QE2 was also supposed to make a real difference in real growth and put the economy back on track. Here is why I think QE3 is destined for the same fate: 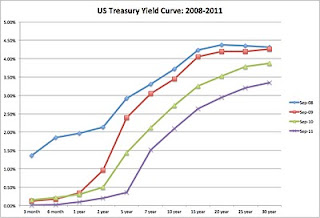 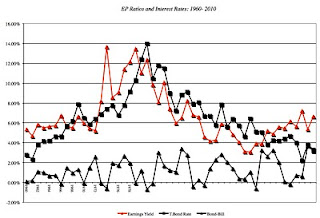 The EP ratio for the S&P 500 right now is about 6.97%, based upon a trailing PE of 14.34. Assume that the best case scenario unfolds and that long term rates drop by 0.20% and that short term rates increase by 0.20%. By my estimates, the EP ratio for the S&P 500 will remain almost unchanged at 6.96%, resulting in the trailing PE of 14.36. Thus, stock prices will not change by much as a result of this action. Perhaps, long term rates will drop by more and/or short term rates will rise less. You can download the spreadsheet that I used for my computation and input your best estimates: this spreadsheet has four worksheets: the raw data on the index and fundamentals, the chart of the historical EP ratios, the regression output (backing the regression above) and a prediction worksheet (where you can estimate the effect on stock prices). Have a go at it! As for myself, I will stick with my favored version of the twist.
Posted by Aswath Damodaran at 12:04 PM

...and the Indian version of
Lets twist

If am not wrong your regression equation should point to an increase in EP with an increase in long term interest rate, not a 'decrease' as you point out.

Also what should the second variable under regression be: short term rate or difference between long term and short term (slope).

I think you need to make a correction in your spreadsheet. In EP&PE Predictor tab the alignment of T.Bond rate and T.bill rates are improper and it should be the otherway around. And coming to your views: You had predicted that QE2 wont work and now arguing that this Operation Twist don't give expected results, is there any other way in your mind that the Fed should act in order to come out of this mess ??

Fixed the problems on the spreadsheet and conclusion remains largely unchanged: this will have almost no effect on stock prices. And the bottom line is that the Fed cannot be the savior in this recession: part of the answer is in better fiscal policies (a fight that is going on right now) and part of it is just structural. The US is going through a structural change (which is affecting the rest of the globe) that will be long and painful.

Professor, very interesting notes on the possible effects of QE3...
However I have a few notes on the side effects of the increase in valuation, do you think that increase in market value might have affect a lower Return of Capital (RoC) and Return on Equity (RoE) ratio as company/corporate earnings might not differ because of the current economy?

Hence lower RoE or RoC might effect the valuations.

I don't see how an increase in market value affects either ROE or RoIC. Those are based on book value.