In 1992, I had just finished a spreadsheet that contained the average PE ratios for companies in different sectors in the United States. There was little of substance in it, but I decided that since I had it, I might as well share it. I posted that spreadsheet for students in my class to download and made it available to others who visited my website (more hopeful thinking than an actual plan, since there were relatively few people looking for data online). Each year since, I have added to the data collection, initially expanding my list of data items for US companies, and in the last decade, adding to the collection by looking at non-US companies. It is my first task each year and it takes up the first week of the year, and I just uploaded the data today for the 2014 update.


I never imagined that my initial foray into data sharing that started with one spreadsheet of a single statistic would expand to cover 285 spreadsheets in 2014, with more than a thousand data items and that my universe of stocks would include 40,906 listed companies in 131 markets. 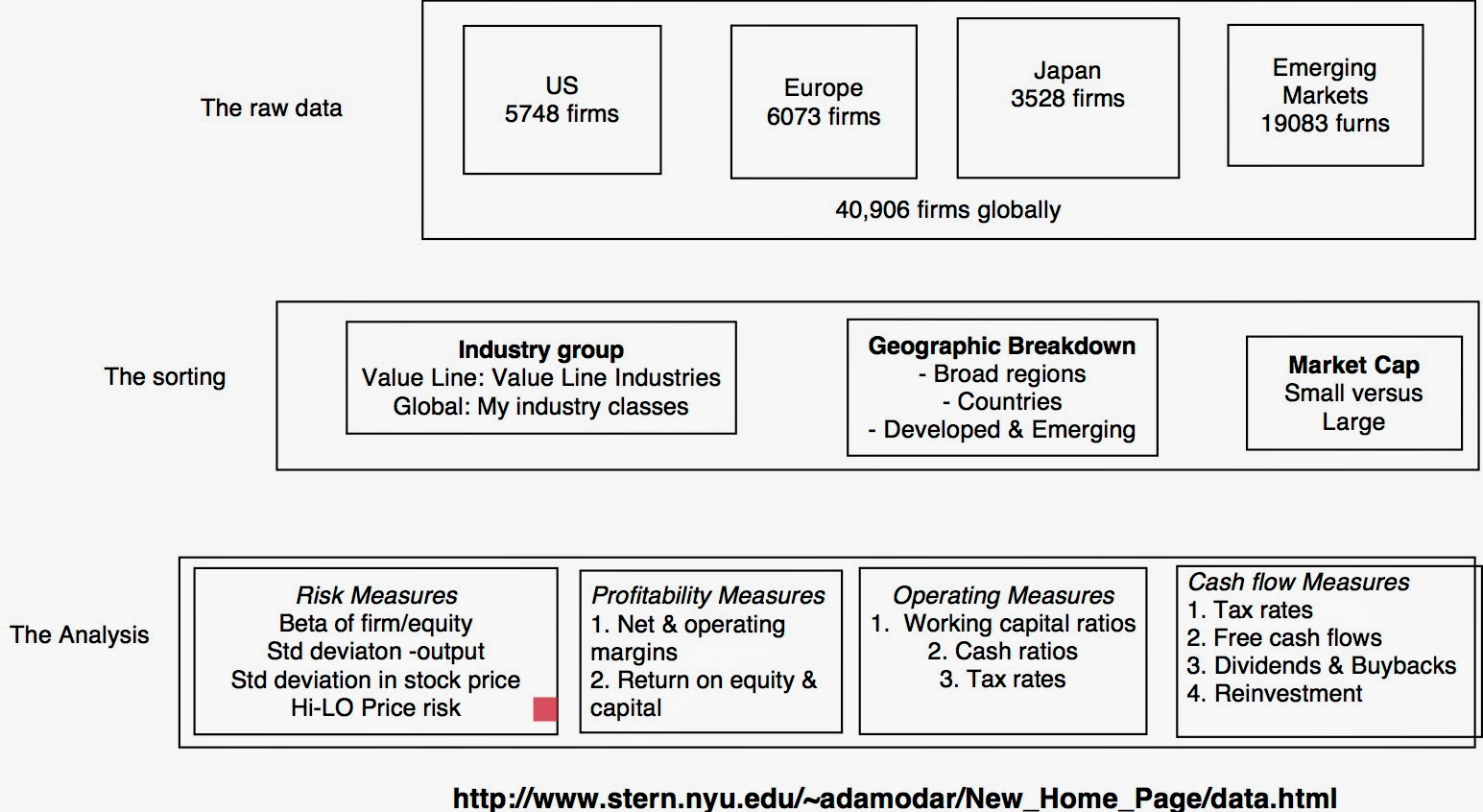 While you can find them all by going to the data section on my website, I won’t bore you with the details in this post, but focus instead on the what, why and what next of data.

The “what”: It starts with raw data!

In the last three decades, we have witnessed a revolution in data access that we need to step back to appreciate. In the 1980s, unless you worked at a university or an investment bank, your access to data was not just limited but often non-existent. I remember trekking to the library (yes, the place with real books and reference stacks and the Dewey decimal system) to review Value Line summary sheets for individual companies and the industry averages that S&P published at the start of every year. I had access to Compustat through the university but it was accounting-focused (with very few market numbers) and dated.


The first glimmers of the data revolution were in the 1990s and for me, it began with Value Line offering an electronic version of the data, delivered on a CD every month by mail. That was the basis for my first data updates and Value Line data remains my base for US data, more because of my familiarity with it and its history than any special characteristics. In fact, there are databases that have richer detail, not just in terms of having more data items for US companies, but in bringing in listings in other markets. My decision to expand my data updates from US to global companies was triggered by my access to Bloomberg terminals that were installed at the Stern School of Business about a decade ago. About five years ago, I started tapping into Capital IQ, an S&P product, that is one of the more comprehensive databases for global companies today. In addition to accounting data, it includes market data and corporate governance data on individual companies and an easy interface for screening and downloading data.

My focus in data analysis is to consolidate the data into a form where it not only less overwhelming but also more usable in valuation and corporate finance endeavors. To that effect, I compute averages on key statistics (profitability measures, risk measures and financial leverage measures) across industries and geographical groupings. I also use the raw data to put my spin on corporate finance measures (cost of capital, excess returns) for individual companies.

The why: It is purely self-interest!

While I am gratified that there are some out there who use my data in their analyses, I want to be clear that there is very little that is altruistic about my efforts. So, in case you are curious, here are the reasons why I think that the week that I spend at the start of each year is well spent.
The what next: Caveat emptor!
If you do decide to download and use any of the data on my website and use it, here are a few things that I hope that you will keep in mind:
I know that there is little earth-shattering that I have said about what I learned from the 2014 data update, but I think those lessons will be better covered in a series of posts that I plan to make in the next  couple of weeks.

P.S: As always, there are dozens of links and data sets in my data page and I am sure that I have screwed up on some of them. If you find any missing links or have issues with the data, please let me know and I will fix them as soon as I can.
Posted by Aswath Damodaran at 11:36 AM

Thanks for this comprehensive review. Looks like the duration sensitivity link needs to be updated

Any desire to migrate these docs to Google drive?

Thanks a lot! As usual a treasure of information and first stop to for a first impression. Much appreciated.

Wonderful review, thanks for sharing!

Great research. You have translated these "numbers" into readable words and I salute you for that.

Thanks for the blog, that was a lot of very interesting and fruitful information on the topic. Alexander Larsson, Corporate Finance Consultant at rockfinancial.net


Final exam and solution files for your fall 2013 valuation class cannot be downloaded. Could you please fix it? Thanks.

"Thus, the PE ratio for a company with earnings fading towards zero can converge on infinity." It would be easy to overcome this problem by publishing the EP ratio, the earnings yield.

Commodity trading is the art of buying and selling of virtual products online, where their market value is speculated and traded on.

Thank you so much for putting all of this data together and sharing it with everyone who is interested in accessing it.

Along the same line, in the interest of open source and open access, are you familiar with Thinknum, a open platform for sharing financial analyses?

Awesome resource, thanks!
Does this mean you consider Australia an emerging market?

In the final trade reporting rules, many of the more contentious issues have been somewhat softened or entirely eliminated from these rules.

Good review.. thank you for providing this information

Totally inspired, congratulations for doing best to keep things interesting. Learning many new topics from the blog, maybe keep an eye on it!

Thank you for all your efforts, Professor!

To analysis the data you need to consolidate the data into a form where it not only less overwhelming but also more usable in valuation and corporate finance endeavors.

Enjoy a collection of matter you have discussed here. Totally inspired, appreciate your work for doing best to keep blog interesting. Keep on offering excellent resources. Thank you for sharing, just keep it up !

Exciting Post, You Rocks! Everyone should check out this standard matter. It was unbelievably knowledgeable. Good job, Congratulation … Will put a trackback to your Blog to get more resourceful content on one click

Nice overview! I really get much more information to this post and feel obligated to leave a comment. Will bookmark this post and visit regularly to get more. Great job, Congrats!!