Reality shows seem to have taken over much of television, but I am not a fan for two reasons. The first is that I don't enjoy watching people who are either so psychologically damaged that they like living their lives in a fishbowl or are so economically desperate that they do not have a choice. The second is that while I recognize the draw of these shows comes from their unscripted nature, I prefer getting my reality jolts from two other forums. The first is live sports, where the allure is that no matter how scripted a sport is, there are those moments of magic, where anything can happen. The second is financial markets, which delight in bringing investors and especially market experts to their knees by behaving in unpredictable ways. Just as ratings week is when television shows are made or ended, earnings season is when the markets deliver their biggest surprises. Building on a theme I introduced about narrative and numbers in an earlier post, I would argue that earnings reports are the vehicles that we should use to confirm, reject or modify narratives (and thus value).

So, let’s say that you have taken this message to heart, constructed a defensible narrative and converted that narrative into a valuation. That narrative, and the valuation that is built on it, cannot be etched in stone, since the real world will deliver surprises, positive as well as negative, that should lead you to revisit your narrative. While some of these narrative-changers can come from macro economic developments and occasional news stories about the company, earnings reports remain the primary mechanism for delivering news about companies. While much of the focus in these earnings reports remains on the bottom line, often defined as earnings per share, and investors react to whether that number comes in above or below expectations, it is also true that these reports can contain news that should lead you to revisit your narrative and change your valuation. I would broadly classify these narrative effects into three categories:
Narrative Shifts versus Narrative Changes: Shades of Gray
This distinction between narrative breaks, shifts and changes is a good one to think about when you look at earnings reports, but it is not alway easy to make. In fact, it is entirely possible that you and I could look at the same earnings report and come to very different conclusions about its impact on narrative for three reasons:

Narrative Adjustments: Reactive and Proactive Valuation Responses
How do we deal with these narrative adjustments in conventional valuation? Very badly, I am afraid. If your valuation is a rigid discounted cash flow valuation, your response to narratives breaking, shifting or changing is denial. In that static world, the narrative remains constant, your valuation inputs stay the same, intrinsic value never changes and it is the market that is viewed as being at fault for its volatility. Even those who claim to use more dynamic processes for valuation often stay within the traditional framework, trying to increase discount rates to reflect potential narrative breaks and growth rates to capture narrative changes.  Finally, even the best among us tend to be more reactive than proactive, adjusting value for narrative adjustments that have already occurred, but not making any attempt for the potential for adjustments in the future. 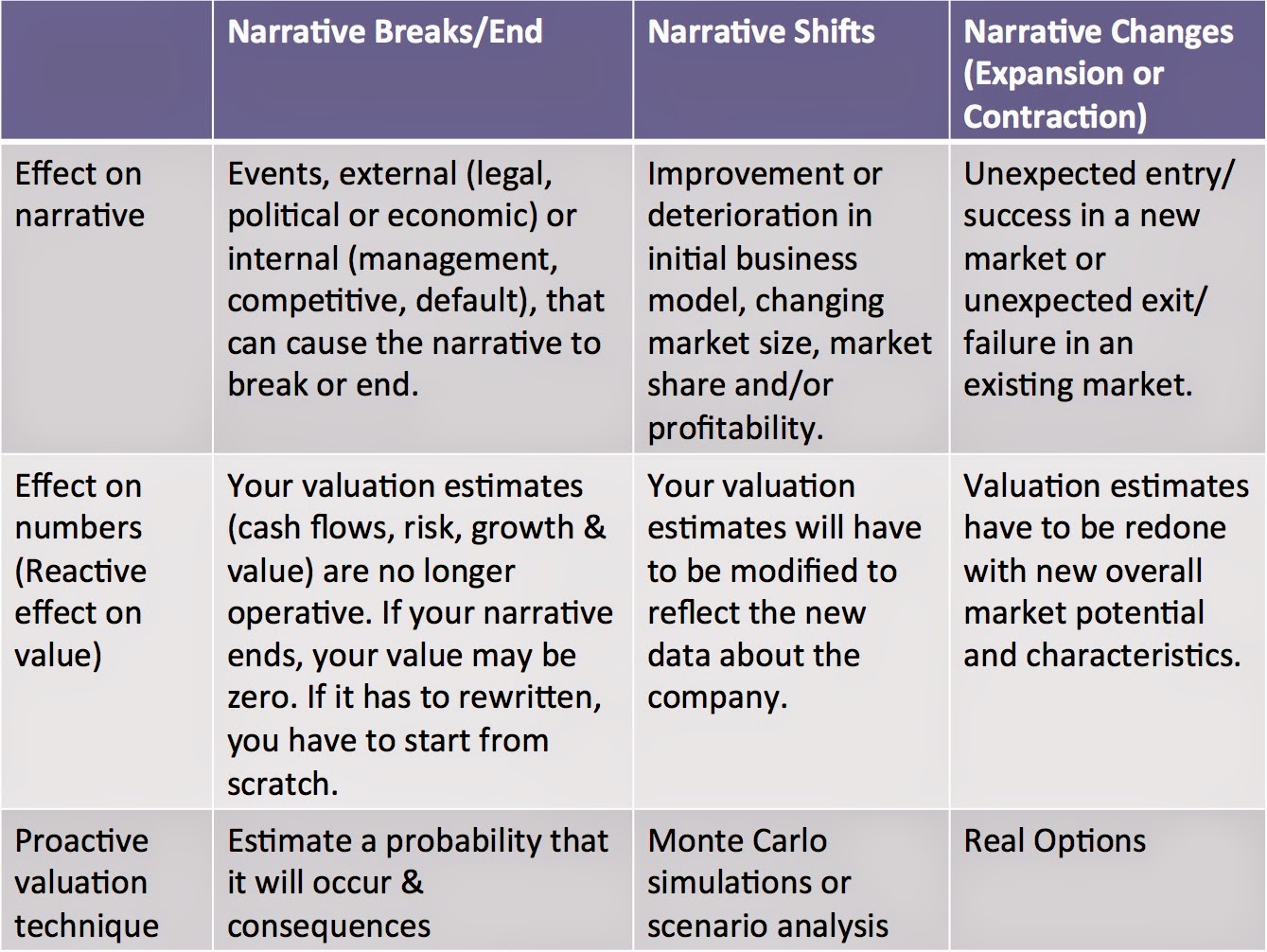 Earnings reports remain a company's key delivery mechanism for news about both its operations and plans of the future, but they are filled with distractions. Paraphrasing Nate Silver, it is important that we separate the signal from the noise and use these reports to revisit our narratives and valuations. If you are an avid market watcher, you may feel that I am over analyzing the earnings process and that the market reaction to an earnings report has little to do with narrative shifts or long term value, and more to do with meeting investor expectations on key numbers (earnings per share, revenues, number of users etc.). I don't disagree with you and in my companion post, I will focus on the metrics that investors use to judge earnings reports, why these metrics might vary across companies and over time and the potential danger of letting these metrics determine investment decisions.
Links

Posted by Aswath Damodaran at 3:28 PM

One correction to this article. MLPs are not require to payout 90% of their income like REITs. The only requirement for MLPs is for 90% of their income to be from qualifying sources (i.e. energy). The partnership agreement stipulates that MLPs must distribute all "available cash"; however, the definition of "available" is left to the discretion of the general partner.