Narrative and Numbers: How a number cruncher learned to tell stories!

When I taught my first valuation class in 1986 at New York University, I taught it with numbers, with barely a mention of stories. It was only with the passage of time that I realized that my valuations were becoming number-crunching exercises, with little holding them together other than historical data and equations. Worse, I had no faith in my own valuations, recognizing how easily I could move my final value by changing a number here and a number there. It was then that I realized that I needed a story to connect the numbers and that I was not comfortable with story telling, and that realization led me to start working on my narrative skills. While I am still a novice at it, I think that I have become a little better at story telling than I used to be and it is this journey that is at the core of my newest book, Narrative and Numbers: The Value of Stories in Business.

What comes more naturally to you, story telling or number crunching? That is the question that I start every valuation class that I teach and my reasons are simple. In a world where we are encouraged to make choices early and specialize, we unsurprisingly play to our strengths and ignore our weaknesses. I see a world increasingly divided between number crunchers, who have abandoned common sense and intuition in pursuit of data analytics and complex models and story tellers, whose soaring narratives are unbounded by reality. Each side is suspicious of the other, the story tellers convinced that numbers are being used to intimidate them and the number crunchers secure in their belief that they are being told fairy tales. It is a pity, since there is not only much that each can learn from the other, but you need skills in investing and valuation. I think of valuation as a bridge between stories and numbers, where every story becomes a number in the valuation and every number in a valuation has a story behind it.

When I introduce this picture in my first class, my students are skeptical, as they should be, viewing it as an abstraction, but I try to make it real, the only way I can, which is by applying it on real companies. I start every valuation that I do in class with a story and try to connect my numbers to that story and I try to be open about how much I struggle to come up with stories for some companies and have much my story has to change to reflect new facts or data with others. I push my students to work on their weaker sides when they do valuations, trying  asking story tellers to pay more heed to the numbers and beseeching number crunchers to work on their stories. Seeking a larger audience, I have not only posted many times on the process but almost every valuation that I have posted on this blog has been as much about the story that I am telling about the company as it is about the numbers. In fact, having written and talked often about the topic, I thought it made sense to bring it all together in a book, Narrative and Numbers, published by Columbia University Press, and available at bookstores near you now (and on Amazon in both physical and Kindle versions). (Update: The hardcover is not available yet outside the United States, but should be accessible in about 4-6 weeks. The Kindle version is available everywhere.)

From Story to Value: The Sequence

So, how does a story become a valuation? This book is built around a sequence that has worked for me, in five steps, starting with a story, putting the story through a reality check, converting the story into a valuation and then leaving the feedback loop open (where you listen to those who disagree with you the most and try to improve your story). 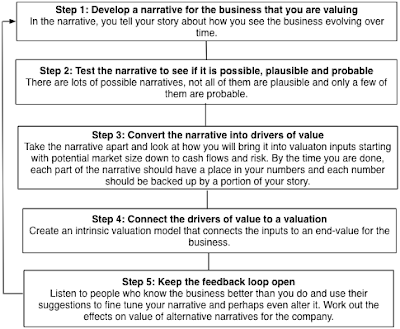 There is no rocket science in any of these steps and I am sure that this is not the only pathway to converting narrative to value. These steps have worked for me and I use four companies as my lead players to illustrate the process.
In the later chapters, I bring in other familiar names (at least to those who read my blog), Vale to illustrate how macroeconomic factors affect stories and Yahoo! to examine the effect of the corporate life cycle. In the final part of the book, I turn the focus on management and look at how the story telling skills of top managers can make a significant difference in how a young company is perceived and valued by the market and how that skill set has to shift as the company ages.

This is my tenth book and I have never had more fun writing a book. There are three aspects to this book that I hope come through:
Closing

I am usually too embarrassed to ask people to buy my books, since many of them are obscenely over priced, one reason that I don't require them even for students in my classes. I feel no such qualms about this book, since it is (I think) priced reasonably and I hope it offers good value for the money. I hope that you will read the book and that that you enjoy it, and if you can learn something that helps you improve your valuation skills, I will view that as icing on the cake. Drawing on one of the themes in the book, where I argue that the key to keep the feedback loop open, I would also like to hear from those of you who don't like the book and what I can do better! I'll try!


Book Links
Posted by Aswath Damodaran at 11:23 AM

Thanks so much for the information about the book. I'm scheduled to receive it tomorrow and can't wait to reading it. I am an avid follower of your blog.

Hello Professor -- Firstly, I am a dedicated follower of your teachings. I really enjoy your current book "Narrative and Numbers". I am now in the process of going through it for a second time and continue to marvel how succinct and rationale your narratives are. Also linkig in Chapter on your website with additional supprting musings further ties your approach. Your enthusiasm for valuations is contagious!
Although I have many of the charts from various musings, it would be helpful to me (a senior, visually challenged) if you would consider providiung the graphics from from the book as part of the chapters on your site. The graphics and fonts are relatively compact based on the size of your book. This is not a high priority but justt a thought. Once again many thanks and continued success.