In my last post, I looked at the risk premiums in US markets, and you may have found that focus to be a little parochial, since as an investor, you could invest in Europe, Asia, Africa or Latin America, if you believed that you would receive a better risk-return trade off. For some investors, in countries with investment restrictions, the only investment options are domestic, and US investment options may not be within their reach. In this post, I will address country risk, and how it affects investment decisions not only on the part of individual investors but also of companies, and then look at the currency question, which is often mixed in with country risk, but has a very different set of fundamentals and consequences.

Country Risk
There should be little debate that investing or operating in some countries will expose you to more risk than in other countries, for a number of reasons, ranging from politics to economics to location. As globalization pushes investors and companies to look outside of their domestic markets, they find themselves drawn to some of the riskiest parts of the world because that is where their growth lies.

Drivers and Determinants
In a post in early August 2019, I laid out in detail the sources of country risk. Specifically, I listed and provided measures of four ingredients:
The bottom line, if you consider all four of these risks, is that some countries are riskier than others, and it behooves us to factor this risk in, when investing in these countries, either directly as a business or indirectly as an investor in that business.

Measures
If you accept the proposition that some countries are riskier than others, the next step is measuring this country risk and there are three ways you can approach the task:
a. Country Risk Scores: There are services that measure country risk with scores, trying to capture exposure to all of the risks listed above. The scores are subjective judgments and are not quite comparable across services, because each service scales risk differently. The World Bank provides an array of governance indicators (from corruption to political stability) for 214 countries (https://databank.worldbank.org/source/worldwide-governance-indicators#) , whereas Political Risk Services (PRS) measures a composite risk score for each country, with low (high) scores corresponding to high (low) country risk.
b. Default Risk: The most widely accessible measure of country risk markets in financial markets is country default risk, measured with a sovereign rating by Moody’s, S&P and other ratings agencies for about 140 countries and a market-based measure (Sovereign CDS) for about 72 countries. The picture below provides sovereign ratings and sovereign CDS spreads across the globe at the start of 2020:

Company Risk Exposure to Country Risk
The conventional practice in valuation, which seems to be ascribe to all countries incorporated and listed in a country, the country risk premium for that country, is both sloppy and wrong. A company’s risk comes from where and how it operates its businesses, not where it is incorporated and traded. A German company that manufactures its products in Poland and sells them in China is German only in name and is exposed to Polish and Chinese country risk. One reason that I estimate the equity risk premiums for as many countries as I need them in both valuation and corporate finance, even if every company I analyze is a US company.

Valuing Companies
If you accept my proposition that to value a company, you have to incorporate the risk of where it does business into the analysis, the equity risk premium that you use for a company should reflect where it operates. The open question is whether it is better to measure operating risk exposure with where a company generates its revenues, where its production is located or a mix of the two. For companies like Coca Cola, where the production costs are a fraction of revenues and moveable, I think it makes sense to use revenues. Using the company’s 2018-19 revenue breakdown, for instance, the equity risk premium for the country is:

For companies where production costs are higher and facilities are less moveable, your weights for countries should at least partially based on production. At the limit, with natural resource companies, the operating exposure should be based upon where it produces those resources. Thus, Aramco’s equity risk premium should be entirely based on Saudi Arabia’s, since it extracts all its oil there, but Royal Dutch’s will reflect its more diverse production base: 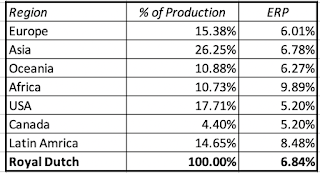 Put simply, the exposure to country risk does not come from where a company is incorporated or where it is traded, but from its operations.

Analyzing Projects/Investments
If equity risk premiums are a critical ingredient for valuation, they are just as important in corporate finance, determining what hurdle rates multinationals should use, when considering projects in foreign markets. With L’Oreal, for instance, a project for expansion in Brazil should carry the equity risk premium for Brazil, whereas a project in India should carry the Indian equity risk premium. The notion of a corporate cost of capital that you use on every project is both absurd and dangerous, and becomes even more so when you are in multiple businesses.

The Currency Effect
When the discussion turns to country risk, it almost always veers off into currency risk, with many conflating the two, in their discussions. While there are conditions where the two are correlated and draw from the same fundamentals, it is good to keep the two risks separate, since how you deal with them can also be very different.

Decoding Currencies: Interest Rates and Exchange Rates
When analyzing currencies, it is very easy to get distracted by experts with macro views, providing their forecasts with absolute certainty, and distractions galore, from governments keeping their currencies stronger or weaker and speculative trading. To get past this noise, I will draw on the intrinsic interest rate equation that I used in my last post to explain why interest rates in the United States have stayed low for the last decade,
Intrinsic Riskfree Rate = Inflation + Real GDP Growth
That identity can be used to both explain why interest rates vary across currencies as well as variation in exchange rates over time.

Risk free Rates
If you accept the proposition that the interest rate in a currency is the sum of the expected inflation in that currency and a real interest that stands in for real growth, it follows that risk free rates will vary across currencies. Getting those currency-specific risk rates can range from trivial (looking up a government bond rate) to difficult (where the government bond rate provides a starting point, but needs cleaning up) to complex (where you have to construct a risk free rate out of what seems like thin air).

This approach can be used in almost any setting to estimate a local currency risk free rate, including the following:
The key inputs here are the expected inflation rate in the US dollar and the expected inflation rate in the local currency. The former can be obtained from market data, using the difference between the US T.Bond rate and the TIPs rate, but the latter is more difficult. While you can always use last year’s inflation rate, but that number is not only backward looking but subject to manipulation. I prefer the forecasts of inflation that you can get from the IMF, and I have used those to get expected risk free rates in other currencies, using the US T.Bond rate as my base risk free rate, and you can find them at this link.

Currency Choice
Having belabored the reasons for why riskfree rates vary across currencies, let’s talk about how to pick a currency to use in valuing a company. The key word is choice, since you can value any company in any currency, though it may be easiest to get financial information on the company, in a local currency. An Indian company can be valued in US dollars, Indian Rupees or Euros, or even in real terms, and if you are consistent about dealing with inflation in your valuation, the value should be the same in every currency. At first sight, that may sound odd, since the risk free rate in US dollars is much lower than the risk free rate in Indian rupees, but the answer lies in looking at all of the inputs into value, not just the discount rate. In fact, inflation affects all of your numbers:

With high inflation currencies, the damage wrought by the higher discount rates that they bring into the process are offset by the higher nominal growth you will have in your cash flows, and the effects will cancel out. With low inflation currencies, any benefits you get from the lower discount rates that come with them will be given back when you use the lower nominal growth rates that go with them. In practice, there is perhaps no other aspect of valuation where you are more likely to be see consistency errors than with currencies, and here are some scenarios:
One of the side costs of globalization is that you can no longer assume, especially if you are a US investor or analysts, that the conversations that you will be having will always be on your currency terms (presumably dollars). Understanding how currencies are measurement tools, not instruments of risk or asset classes, will make that transition easier.

Conclusion
In this post,  I looked at two variables, country and currency, that are often conflated in valuation, perhaps because risky countries tend to have volatile currencies, and separated the discussion to examine the determinants of each, and why they should not be lumped together. I can invest in a company in a risky country, and I can choose to do the valuation in US dollars, but only if I recognize that the currency choice cannot make the country risk go away. In other words, a Russian or Brazilian company will stay risky, even if you value it in US dollars, and a company that gets all of its revenues in Northern Europe will stay safe, even if you value it in Russian Rubles.