In the last post, I noted the strong backing for value investing for much of the last century, where a combination of investing success stories and numbers that back those stories allowed it to acquire its lead position among investment philosophies. In this post, I plan to look at the underbelly of value investing, by first going back to the "good old days" for value investing, and probing the numbers more closely to see if even in those days, there were red lights that were being ignored. I will follow up by looking at the last decade (2010-2019), a period where value investing lost its sheen and even long time value investors started questioning its standing, and then extend this discussion to 2020, as COVID has caused further damage. I will close by looking at the explanations for this lost decade, not so much as a post-mortem, but to get a measure of what value investors may need to do, going forward.

The Dark Side of the Good Old Days

For some value investors, the graph from my last post, showing that low price to book stocks have outperformed high price to book stocks by more than 5% a year, going back to 1927 in the US, is all the proof they need to conclude that value investing has won the investing game, but even that rosy history has warts that are worth examining. In the graph below, I look at the year-to-year movements in the value premium, i.e. the difference between the annual returns on the lowest and highest deciles of price to book ratios:

While it is true that low price to book stocks earned higher annual returns than high price to book stocks over the entire time period, note that there is significant variation over time, and that the high price to book stocks delivered higher returns in 44 of the 93 years of data. In fact, one of the pitches that growth investors made, with some success, during the glory days of value investing was that you could still succeed as a growth investor, if you had the capacity to time the value/growth cycle. In particular, looking back at the data on value versus growth and correlating with other variables, there are two fundamentals that seem to be correlated with whether value or growth investing emerges the winner.

In short, the fact that value stocks, at least based upon the price to book proxy, delivered higher returns than growth stocks, again using that proxy, obscures the reality that there were periods of time even in the twentieth century, where the latter won out.

The most telling statistics on the failure of value investing come from looking at the performance of mutual fund managers who claim to be its adherents. While the earliest studies of mutual funds looked at them as a group, and concluded that they collectively under performed the market, later studies have looked at mutual funds, grouped by category (small cap vs large cap, value vs growth) to see if fund managers in any of these groupings performed better than managers in other groupings. None of these studies have found any evidence that value fund managers are more likely to beat their index counterparts than their growth fund counterparts. It is telling that value investors, when asked to defend their capacity to add value to investing, almost never reference that research, partly because there is little that they can point to as supportive evidence, but instead fall back on Warren Buffett, as their justification for value investing. As I noted in my last post, there is no doubt about Buffett's success over the decades, but as the man turned ninety this year, it is worth asking whether the continued use of his name is more a sign of weakness in value investing, rather than of strength.

Wandering in the wilderness? Value Investing in the last decade

Looking at my analysis of value investing over the last century, you can accuse me of perhaps nitpicking an overall record of success, but the last decade has, in my view, tested value investing in ways that we have never seen before. To see how much of an outlier this period (2010-2019) has been, take a look at the returns to low and high PBV stocks, by decade:

While it is true that the dot-com boom allowed growth stocks to beat out value stocks in the 1990s, the difference was small and bunched up in the last few years of that decade. In the 2010-2019 time period, in the battle between value and growth, it was no contest with growth winning by a substantial amount and in seven of the ten years.

To make things worse, active value investors, at least those that run mutual funds, found ways to underperform even these badly performing indices. Rather than use risk and return models or academic research to back up this proposition, and open up the debate about portfolio theories, I will draw on a much more simplistic but perhaps more effective comparison. One of S&P's most informative measures is SPIVA, where S&P compares the returns of fund managers in different groupings to indices that reflect that grouping (value index for value funds, growth index for growth funds etc.) and reports on the percentage of managers in each grouping that beat the index. Listed below are the SPIVA measures for 2005-2019 for value managers in all different market cap classes (large, mid-sized, small):

Put simply, most value fund managers have had trouble beating the value indices, net of fees. Even gross of fees, the percentages of fund managers beating their indices stays well above 50%.

Even legendary value investors lost their mojo during the decade, and even Warren Buffett's stock picking delivered average returns. He abandoned long standing practices, such as using book value as a basis for estimating intrinsic value and never doing buybacks, for good and bad reasons. The best indicator of how the market has also lowered the value it attaches to his stock picking is in a number that has the Buffett imprimatur, the ratio of price to book at Berkshire in the last few years: 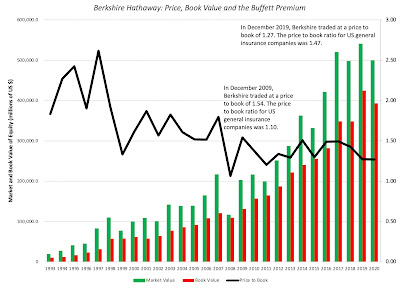 Since Berkshire's assets are primarily in publicly traded companies, and these investments have been marked to market for all of this period, one way to look at a portion of the premium that investors are paying over book value is to consider it to be the stock picker premium. Since some of the premium can also be explained by its presence in the insurance business, I compared the price to book for Berkshire to that of general insurance companies listed and traded in the United States. At the start of 2010, Berkshire traded at a price to book ratio of 1.54, well above the US insurance company industry average of 1.10. Ten years later, at the start of 2020, the price to book ratio for Berkshire had dropped to 1.27, below the average of 1.47 for US insurance companies. The loss of the Buffett premium may seem puzzling to those who track news stories about the man, since he is still not only treated as an investing deity, but viewed as the person behind every Berkshire Hathaway decision, from its investment in Apple in 2017 to its more recent one in the Snowflake IPO. My reading is that markets are less sentimental and more realistic in assessing both the quality of his investments (that he is now closer to the average investor than he has ever been) and the fact that at his age, it is unlikely that he is the lead decision-maker at Berkshire anymore.

For much of the decade, value investors argued that their underperformance was a passing phase, driven by the success of growth and momentum and aided and abetted by the Fed, and that it value investing would come back with a vengeance in a crisis. The viral shock delivered by the Corona Virus early this year seemed to offer an opportunity for value investing, with its emphasis on safety and earnings, to shine.

In the first few weeks, there were some in the value investing camp who argued that following old time value investing precepts and investing in stocks with low PE and Price to book ratios and high dividends would help buffer investors from downside risk. While the logic may have been appealing, the results have not, as can be seen in this table, where I look at stocks classified based upon their PE ratios and Price to Book ratios on February 14, 2020 (at the start of the crisis), and examining the changes in the aggregate market capitalization in the six months following:

The numbers speak for themselves. Low PE and low PBV stocks have lost value during this crisis, just as high PE and PBV stocks have gained in value. Breaking companies down based upon dividend yields, and looking at market capitalization changes yields the following:

The attempt to explain what happened to value investing in the last decade (and during COVID) is not just about explaining the past, since the rationale you provide will inform whether you will continue to adhere to old time value investing rules, modify them to reflect new realities or abandon them in search of new ones. In particular, there are four explanations that I have heard from value investors for what were wrong during the last decade, and I will list them in their order of consequence for value investing practices, from most benign to most consequential.

From listening to value investors across the spectrum, there does not seem to be a consensus yet on what ails it, but the evolution in thinking has been clear. As the years of under performance have stretched on, there are fewer value investors who believe that this is a passing phase and that all that is needed is patience. There are many value investors who still blame the Fed (and other central banks) for their underperformance, and while I agree with them that central banks have sometimes over reached and skewed markets, I also think that this belief has become a convenient excuse for not looking at the very real problems at the heart of value investing. Especially after the COVID experience, there are at least some value investors who are willing to consider the possibility that it is time to change the way we practice value investing. In my next post, I will look at some of these changes.
YouTube Video
Blog Posts on Value Investing (2020)
Posted by Aswath Damodaran at 5:26 PM

Great series on value you published! Quick question: Is the SPIVA graph supposed to represent the proportion of active value funds FAILING to beat their indices, not the other way around? 92% of multi-cap managers beating from 2010-2019 seems very impressive to me...