As companies get larger, it becomes more difficult to sustain high percentage growth rates in revenues for two reasons. The first is that the same percentage growth rate will require larger and larger absolute changes in revenues each period and thus will be more difficult to deliver. The second is that a company's success  will attract the attention of other firms; the resulting competition will act as a damper on growth.

I know! I know! You have your counter examples ready: Apple and Google come to mind. First, note that even these exemplars of success have seen growth rates decline over time. In fact, I posted Google's revenue growth (in dollar and percentage terms) in a prior post and while growth rates remain healthy, they have declined over the last decade. Second, the very fact that you can name these great growth companies is an indication that you are talking about the exceptions rather than the rule. Could the company you are looking at right now be the next exceptional company? Sure, but do you want to value your company to be the exception? I would not, since pricing your company for perfection will open you up to mostly negative surprises in the future.

Metrick and Yasuda, in their book on venture capital, have a sobering study on the persistence (or lack thereof) of growth at high growth companies. They compared the revenue growth rates at companies at the time of their IPOs to the average for the sector to which they belong and then followed up by looking at these growth rates in subsequent years. 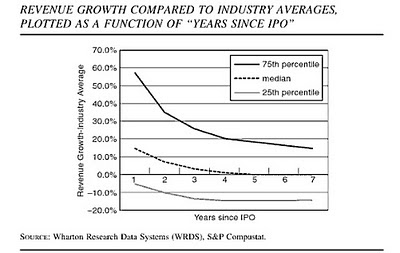 Given this evidence that growth decelerates quickly at companies, how do we explain valuations where analysts use 50% compounded growth rates for 10 to 15 years or longer? I think the problem lies in the "percentage illusion", where analysts feel that their growth assumption is not changing if they keep the growth rate unchanged. However, delivering a 25% growth rate is far easier in year 1 than the same firm delivering a 25% growth rate in year 9. The best way to introduce some realism in growth rates is to convert the percentage growth rate in revenues into dollar changes in revenues and consider what the company will have to do in terms of operations to deliver that change. When valuing a retail company, for instance, computing that the company will have to open 300 new stores to deliver a 25% growth rate in year 10 (as opposed to 30 in year 1) may quickly lead to a reassessment of that growth rate. I have a very simple spreadsheet that does little more than this: convert percentage growth rates into revenue changes each period. As an exercise, take any young, growth company that you want to value, put in the current revenues and try different compounded revenue growth rates. The power of compounding continues to amaze me!

You know, a lot of individuals are hunting around for this information, you could aid them greatly.