Growth (Part 3): The Value of Growth

Consider a firm that has $ 100 million invested in capital that generated $ 10 million in after-tax income in the most recent year. For this firm to generate more income next year, it has to do one of two things:
While both components feed into observed growth, they are not equal in their effect on value on two dimensions:


Looking at any company's past, you can draw conclusions about whether the growth registered in the past was valuable, neutral or value destroying, by comparing the return on capital generated on the growth investments to the cost of capital. The return on capital itself is computed based on operating income and the book value of capital invested:
Return on capital = Operating income (1- tax rate)/ (Book value of equity + Book value of debt - Cash)
This calculation is also in the spreadsheet referenced in the last paragraph. It is the only place in valuation/corporate finance, where we use book value and we do so because we are looking at the profits generated on what was originally invested in existing assets (rather than their updated market values). There are a host of dangers associated with trusting accounting numbers and I have written about them and what to do to compensate in a paper on measuring returns. 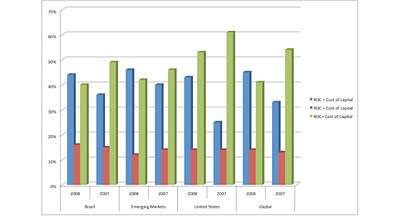 While the crisis in 2008 took at toll on returns, even in 2007, a good year for most companies globally, about a third of all companies in the US and a higher proportion elsewhere generated returns on capital that were less than the cost of capital. While you may quibble with the year and have issues with how I computed cost of capital and return on capital, I think you will agree that value destruction is far more common at companies than we would like to believe and that quality growth (that increases value) is rare. To answer the second question, I compute returns on capital and cost of capital, by sector, for US companies and report them on my website at the start of every year. You can get the most recent update (from the start of 2011) by clicking here.

For those of you who do not want to go through the process of computing return on capital and cost of capital, I have a simpler proxy for measuring the quality of growth. Start by computing the capital invested thus:
Capital invested = Book value of equity + Book value of debt - Cash
Divide the change in operating income over the period by the change in capital invested over the period; the ratio is a measure of the the quality of the growth, with higher ratios representing higher quality. In the table below, I have computed the number for Google going back to 2003:

In the last column, I computed the marginal return on capital in that year by dividing the change in operating income that year by the change in capital. Based on this measure, in 2009 and 2010, Google saw a drop off in its quality of growth, a drop off I would attribute to acquisitions made by the company to keep its growth rate high. Its pre-tax marginal return has dropped to about 20%; in after-tax terms that would be closer to 13 or 14%, a good return on capital, but not a great one.  Investors have had wake up calls in Amazon and Netflix as well in recent days, as the costs of delivering growth have come to the surface. In most growth companies that disappoint, the clues are available in the years before.

It looks like a flaw in your analysis is that you aren't accounting for any economic or cyclical factors in 2009. It wasn't exactly a period of run-of-the-mill slowdown. The global financial crisis of course impact corporate incremental returns.

A metric that would be value is how Google fared with regard to incremental operating profits relative to those of the market.

Any time you use one year numbers, you will be exposed to this issue. It is possible that the drop off you have seen in the last 2 years is more a function of the economy but let's see.... If you see Google announce more acquisitions, I think you will have your answer sooner than you think.

Under efficiency growth, you missed the point of "pricing power". Volume may remain same, unit selling price increasing... hence the growth.
And if its a niche product, the growth can stay much longer than 4-5 years.

Unless its increasing pricing power, it should already be embedded in the growth rate. If you have increased pricing power, I think of it still as efficiency growth, because you are deriving it on existing assets.

Google's numbers are going down in the near future. There's no question of that. It's gonna be same for Microsoft and Nokia. And probably for Apple too. The reason is smartphones. These companies are fighting hard for market shares and survival right now. Apple has published some numbers and they are investing insane amount of dollars in this game. One billion is not that much in this big boys game. Google also needs more patents and they are not gonna be cheap either.

In your spreadsheet titled "growth breakdown" can you explain the calculation behind cell B24 (valued added by future growth).

Can you explain the underlying logic in more detail. This cell has more involved calculations than your explanation in the article.

I really appreciate your work.

Can't agree more .. great post as usual. I was curious as to how Google has been doing since 2010 and did some number crunching ( you can view my analysis here : http://bit.ly/1mL9c9r). As expected the trend of declining returns ( marginal as well as overall ROC) continued through 2013. What I am not 100% sure though is the impact of timing on returns. Sometimes it takes a while for an investment (e.g. Youtube) to start contributing to the bottomline. But looking at the numbers, it is clear that Google has been making some inefficient capital allocation off late.