Much of what we learn and practice as investors represent models and methods developed in a different age, one where the market was composed of consumer product, infrastructure and manufacturing companies. While those lessons may have been good ones for old economy markets, I will argue in this post that they can provide misleading signals with short corporate life-cycles,  an affliction common among, but not unique to, tech companies. Lest this be construed as an attack on a specific group of investors, I will spread my critique across investor classes, starting with value investors, then moving on to growth investors and market timers and then turning it on intrinsic valuation practitioners (which is where I count myself).

The Tech Challenge for Value Investors
If you are a value investor, you may have been told that everything you need to know about valuation is in Ben Graham's Security Analysis. I will make a confession.  I love Ben Graham for his philosophy and intellect, but I think that using the techniques suggested in it to value tech companies is akin to using a hammer to do surgery. It is not Graham's fault, since he wrote the book at a time when the corporate world was populated with railroads, utilities and manufacturing companies and much of his advice was directed at coaxing investors who were more interested in buying bonds, to consider stocks as an alternative. In fact, in the Graham world, a good stock looks like a perpetual bond, with ever-growing coupons. So, at the risk of arousing the ire of value purists, here is my list of old value investing chestnuts that need to be roasted on the tech fire.

2. Don't buy and hold "good" companies: Not all value investors subscribe to this notion, but quite a few seem to accept the idea that if you find a good company (well managed, with strong competitive advantages), you should buy the company for your portfolio and hold for the long term (perhaps forever). That is not good advice with tech companies, where today's tech superstar can become tomorrow's dog. If you buy a tech company, you should be revaluing it at frequent intervals, selling it, if the price exceeds the value significantly.

3. Don't prize dividends over stock buybacks: I have always believed that fixed dividends are a ill-suited way of returning cash on a residual claim (equity), especially because investors who receive them seem to view them as constants that should not be changed. With technology companies, I would argue that stock buybacks are not only more suited to their life cycle needs, but are also more reflective of what they can afford to pay out, than large dividends. Again, I can offer partial backing for this statement by comparing cash returned by old tech companies versus old non-tech companies. 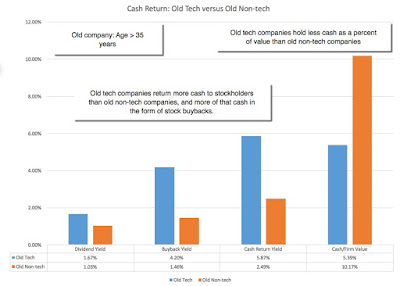 The Tech Challenge for Growth Investors
While growth investors don't have the long traditions that value investors do, they have their own share of dos and don'ts accumulated through time. One is, of course, the idea of buying growth at a reasonable price (GARP), a notion made popular by Peter Lynch's work at Magellan and his resultant writings. In putting that  common sense notion into practice with tech companies,  growth investors draw on they own share of practices based on the premises that growth is good, that it is sustainable and if bought at a reasonable price, is a winning strategy.
Note that early in the life cycle, tech companies have lower PEG ratios than non-tech companies and later in the life cycle, they look expensive. 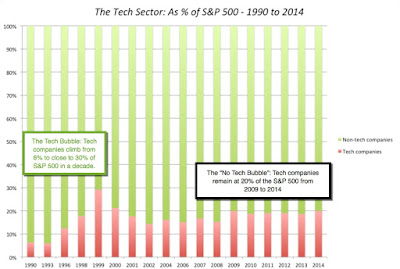 While only the most successful of tech companies make it into the index, they do bring their specific life cycle characteristics with them. The effect on the index PE will depend in large part on where these companies are in their life cycles; if they are still in their growth phases, their presence will push up the index PE, but if they are in decline, they can depress the index PE.

The Tech Challenge in Valuation
As someone who lives in the intrinsic value world, I wrestle with this compressed life cycle concept, when I value technology companies. The typical framework for valuing a company, in a discounted cash flow valuation, is to estimate cash flows for a growth phase and then to estimate a terminal value, based on growth forever beyond that point.

The defense that is offered, when someone notes that nothing lasts forever, is that if a company lasts decades, you might as well use the assumption of "forever", since your value will be approximately the same number. That argument loses its power with technology firms, raising the question of whether we are over valuing mature technology companies by using this standard mythology. There are three simple fixes, if the perpetual growth assumption troubles you with a technology company:

As a final point, in intrinsic value, you have to make judgments about managers in companies, and when valuing declining tech companies, where managers are in denial about the decline, you have to value the consequences (bad investments, value destroying growth etc.).

The Bottom Line
As the market's axis tilts towards technology, it may be time for us to revisit the metrics and models that we have been using, almost on auto pilot, for many decades. The shorter lives and the higher failure rates of technology companies can make them look cheap, when they are expensive, if you are a value investor, and their high growth rates can draw in growth investors, who may not factor in the fact that this growth is not sustainable.


Tech Life Cycle Series
Posted by Aswath Damodaran at 10:07 AM

Based on your template for risk adjusting value for a public company (Value + Discrete Risks = Adjusted Value) can a discrete risk be for a tech company the probability of an excessive takeout premium. For example if I calculate a software company with very high revenue growth in early stages, then moderating, and eventually rapidly declining to 0 (perhaps in 15-20 years as a result of quantum computing) and the value is so very far apart for where the market value is, is it fair to assume the market is pricing in a discrete probability of a takeout and a takeout based on something very lofty like 10x sales in 5 years discounted back to today? If this is done you can also get a sense of the implied probability the market is assigning to the business as a going concern and as a takeout. Or based on your experience is it more related to the human experience of the market being too confident and overpaying for growth?

The old economy market analysis techniques still work because of the simplicity of changing only a single factor, the cost of capital (requested return*). If one predicts a flash and burnout, which the graphics support, the reward changes and so does the risk of receiving that reward. *The alternative term “required” return is not used because it infers that an investor should get a return just for bearing risk.

Tech companies buy back stock because they issue massive amount of cheap options to employees and upper management, and they need to somewhat offset the dilution from these options or face ballooning outstanding shares. Net, net the buybacks do zero for minority shareholders because of the massive option issuance. It's not a question of enhancing shareholder value. They don't really care about minority shareholders. It's a money machine for insiders and employees. Essentially, it's nothing but a shell game (and the private market has now expanded this game dramatically). How it all manages to stay afloat is a topic for another comment.

Sir,
Thanks for the insight into tech co's. But i observe, that most of the not's were highlighted. i request you to throw light about do's also, means , some method to identify the GARP company. Will you sir? Hope you publish comment of people from India also...

I whole-heartedly agree with the sense of your commentary. In India, where I practice, people are refusing to shed/ modify their old knowledge, and seem to be losing the race. An eco system which accepts failure ( i.e., zero or negative growth ) is critical to peomote entrepreurship. Tax laws will need to reward this investment behaviour
V SRINIVASAN FCA
velransrini@gmail.com

Dear Prof. Damodaran,
I have two more technical questions:
1. Why don't you take the losses into account when calculating the value per share for the tech company up until year 5? I understand that a discounted cash flow model, by definition, only takes future cashflows into account. But somebody has to take the burden, right? So what does the DCF implicitly assume when moving on the time line?
2. Shouldn't the ROE be affected by the cashflow generation over time?

Thanks for excellent valuation research into the technology companies. I have read your work since the late 90s and see you several times during conferences.

As a professional tech investor, I do share your views on the challenge on the life cycle. It is becoming even more so as the speed of penetration has just accelerated as you have seen it for smartphones. As tech's driver has shifted from industrial to the consumer device and service for the last decade thanks to the ease of the internet and the homogeneity of consumer behavior, a service/product tends to have a sharp adoption curve (i.e. short life cycle). As a side note, more new tech will get closer to the industrials space, which might affect the average shape of life cycle to a certain extent.

Valuation is challenging and requiring in-depth insight into what makes the selected (invested) companies have a foundation to generate new product life cycles from it. That is, of course, difficult to quantify - as each product cycle should have a unique and specific shape of EBITDA margin and capex & R&D cycle. That is to say, there is a gap of discount (intuitively) for the company that has a foundation that is not scalable or leveraged to expand/tap into new opportunities, although not doing so makes sense as it can generate - unsustainably - high FCF in the meantime with a higher certainty.

Valuation in my view is a quantified (and subjective) investment opinion. I am not sure if my response contributes to your research but hope it does.

The defense that is offered, when someone notes that nothing lasts forever, is that if a company lasts decades, you might as well use the assumption of "forever", since your value will be approximately the same number.