Investing and Valuation Lessons from the Renaissance

I just got back a few days ago from a two-week family holiday in Italy, where we spent the bulk of the second week in Florence, which we used as a springboard to see Tuscany. I kept away from work through much of the period, though I did check my emails once in a while and even tried answering a few on my iPhone, where my awful typing skills restricted me to one-sentence responses. So, if you were one of those people that I responded to, I apologize if I seemed brusque. That said, I am also afflicted with a disease of seeing connections between everything I see around me and investing, and this vacation was no exception. Thus, in Florence, as I gazed at Brunelleschi’s magnificent Duomo on the Cathedral and marveled at the beauty of Michelangelo’s David, I could not help but think about how much we (as investors) can learn from those renaissance geniuses.


The Story of Brunelleschi’s Dome


If you have visited Florence or even read about the dome on its cathedral, I am sure that you have heard its story. The construction of the cathedral was begun in 1296 and continued in fits and starts through much of the next few decades with the Plague bringing it to a standstill in the second half of the fourteenth century. The centerpiece of the cathedral was to be its freestanding dome, but since architects of the age lacked the capacity to build one large enough to cover the church, it was left for another generation to complete. In 1418, two goldsmiths in Florence, Lorenzo Ghiberti and Filippo Brunelleschi, competed in a contest for designing the dome, with Brunelleschi winning by a hair. Brunelleschi spent time studying the Pantheon in Rome, a concrete dome built more than a thousand years prior, but one where all records of its construction had long been destroyed. He started work on his Duomo in 1420 and completed it by 1436, and the result speaks for itself: 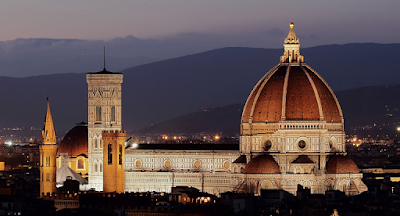 Brunelleschi was an artist, skilled in its many forms, but to build the dome, he not only drew on science but actively used it to solve practical problems. To allow the huge dome to stay standing without visible supports, Brunelleschi came up with the ingenious concept of a dome within a dome (a double shell) and stone ribs designed to defend against the spreading created by the weight of the dome. He had to construct hoisting machines to lift the almost four million bricks and large stones and structural innovations to let workers complete the construct. The dome, once completed, was as much an engineering feat as it was an artistic triumph and it remains so today.

Investing and Valuation Lessons
I can think of at least three big lessons that investors can learn from the Renaissance masters. The first is the meaning of faith, a scarce resource in today's markets, as we eagerly seek confirmation that we are right in market movements and are quick to give up, when things don't go our way. The second is the need for humility, an acceptance that much of what we claim to be new and innovative in investing is neither, and that we can learn from looking at the past. The third is that just as the best of the Renaissance required a melding of art and science, the best of investing is built on a combination of story telling and number crunching.

Lesson 1: The Importance of Faith
Investing is as much about faith as it is about mechanics. As our access to data and models increases, I will borrow words that Tom Friedman used in a different context, and argue that the investing world is becoming flatter. It is not getting any easier to make money from investing and one reason may be that we have no faith in either our ability to attach values to companies, in the face of uncertainty, or in the market’s capacity to correct its mistakes. As a consequence, even those investors who are well versed in valuation mechanics are generally unwilling to act on the valuations that they generate, or when they do, to hold on to them in the face of adversity.  Like many of you, I find myself getting impatient when the stock price does not correct quickly towards my estimated value on my investments and growing uncertain with my own judgment, if the divergence persists for months. As I looked up at the Florence skyline and pondered the patience of those who were willing to build a church first and then wait almost a hundred for someone to come along with its dome, I understood the meaning of faith and how far I have to go to get there.

Lesson 2: There are no new investment lessons, just old ones to relearn
With superior resources and better investment education, we tend to think that we are not only more sophisticated than investors in prior generations but less likely to make the same errors in judgment. If only that were true! Just as the skills that allowed the Romans to build the Pantheon were forgotten for a thousand years and had to be rediscovered by Brunelleschi, there are simple lessons that investors learned in past markets that we seem to forget in new markets. Each time we make collective mistakes as investors and there is a market correction, we are quick to say "never again" only to repeat the same mistakes a few years later.

Lesson 3: Art and Science
Are you an artist or a scientist? An engineer or a poet? We live in an age where we are asked to pick sides and told that the two cannot co-exist. In the context of valuation, the battle is fought out between the story tellers and the number crunchers, with each claiming the high ground. In the last few years, I have argued not just for a truce between the two sides but also for more engagement,  a marriage of numbers and narrative in valuation and investing. Even my best efforts pale in comparison to one look at Brunelleschi’s dome, since he understood that there was no divide between art and science. It is a lesson that we seem to have forgotten over time, as we force people to choose sides in a battle where there are no winners.

An Investment Renaissance
We live in an age of specialists, and in investments, this has taken the form of experts who operate in silos, option traders who act as if their derivative securities can exist without their underlying assets, fixed income investors who function as if bonds are the only game in town and equity investors who can only talk about stocks. This specialization comes with consequences and one of them is that we tend to operate in echo chambers, talking to people who think like us, act like us and not surprisingly, agree with us. If the words "Renaissance man (or woman)" are used to describe someone whose expertise spans different subject areas, in the context of investing, I would use those words to refer to those investors who can move with ease across markets and are just as comfortable with stories as they are with numbers. This is my subjective judgment but I think that there used to be more of them three decades ago, when I started in investing, and they seem to become rarer by the day.  In corporations, banks, money management units, consulting firms and even in academia, we could use more Renaissance thinking.

Posted by Aswath Damodaran at 3:24 PM

If you want to try reaching excellence, as you know, you have to keep learning. But what?
The ones who work in the investing world could appear, at least superficially, luckier than the ones who work in the field of science: after all the financial knowledge is substantially finite, whereas the scientific one is potentially infinite (being constantly enriched by new discoveries).
But even investors (and even the investors wannabe) have to constantly keep learning. What? Well, maybe we should ask "by whom".
Personally speaking I think the hardest lessons to learn are the ones related to us and the faith we have (or we should have) in ourselves. Rarely it is too much, too often it is too low.
This is why we have to still keep learning, even after degrees, PhDs and decades spent on the stock market.

Thanks Prof for this reminder. Faith, patience and humility to learn from others - powerful lessons for all seasons.

I agree too...a more holistic (as great renaissance master Leonardo da Vinci used to follow) approach to our financial subjects would benefit all of us. Giovanni

So true prof, thanks for reminding us to draw lessons from the wonders around us..warm regards Sudeep

When I first started learning about investing, I reached eagerly for the words of Charles T. Munger, thinking there within will lie the splendor of secrets that lead to inevitable, vast wealth. How confused and frustrated I was all those years ago when all I found were pontifications on physics, psychology, philosophy -- a latticework of worldly wisdom that Mr. Munger encouraged everyone to build that involved almost everything EXCEPT the topics of finance and investing. Only after years of suffering slings and arrows in my adventures in investing did I look back, astonished at how right he was. Because investing is art, it is science, it is chaos, it is beautiful and it is ugly. Investing is understanding business, and understanding business is understanding humans and our desires and our flaws and all our paradoxes. Successful investing is to be at the nexus of everything, to be a renaissance man. To be patient yet to be quick yet to never be in a hurry. No wonder it is so damn hard and so rewarding when done right.