DCF Myth 2: A DCF is an exercise in modeling and number crunching!

Most people don't trust DCF valuations, and with good reason. Analysts find ways to hide their bias in their inputs and use complexity to intimidate those who not as well versed in the valuation game. This may surprise you, but I understand and share that mistrust, especially since I know how easy it is to manipulate numbers to yield almost any value that you want, and to delude yourself, in the process. It is for this reason that I have argued that the test of a valuation is not in the inputs or in the modeling, but in the story underlying the numbers and how well that story holds up to scrutiny.

This fall, as I have twice a year, for almost 30 years, I will be teaching a valuation class at the Stern School of Business at New York University. When the 300 registered students walk into my classroom, I know that they will come in with preconceptions about what the class will cover. Many will bring in their laptops, with the latest version of Microsoft Excel installed, eagerly anticipating session after session on modeling, hoping to become Excel Ninjas, by the time the class is done. They expect it to be a class about numbers, more numbers and still more numbers, with Greek alphabets (alphas and betas) thrown in.


I begin the class by asking students to tell me whether each of them is more comfortable with numbers or with stories, and not surprisingly, the class draws disproportionately large numbers of the former, but there are more than a handful of the latter. (There are a number of tests online, like this one, that you can take to make this judgment for yourself, but most of us have a sense without tests.). I then explain my vision of valuation, as a bridge between the two groups, a way of connecting narratives to numbers.

While this picture is only an abstraction in that first class, the rest of the class is really my attempt to flesh out the picture and make the bridge real. I don’t always succeed, but my vision of a successful class is that my number-crunchers walk out of to with a little more imagination and that my storytellers acquire a bit more discipline along the way.


Connecting Stories to Numbers: The Process


The process by which you connect stories to numbers is neither obvious nor intuitive but it can be learned. In an earlier post on the topic, I laid out five steps in this process, not intended to be either exhaustive or sequential. 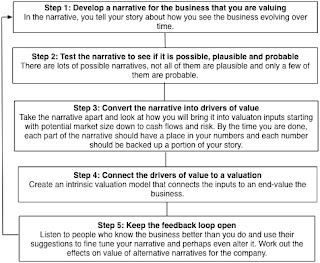 To illustrate, consider Amazon, a high profile company where the world is dividend into those that believe that it is a extraordinary company with a plan to conquer the world and those that use it as an example of how you can fool a lot of people for a really long time. In a post in October 2014, I valued Amazon and arrived at a value of $175 per share.

Rather than get stuck into the details, it is worth laying bare the narrative that I have for Amazon that is determining its value. In my story, Amazon will continue on its path of delivering high revenue growth (with revenues growing to $249 billion by year 10), generally by selling products or offering services at or below cost for the near future (note that margins stay close to zero for the next 5 years), but will eventually start to use its market power to deliver profits, but this market power will be checked by the entry of new players into the retail business, leaving the target margin at a number (7.36%) that reflects the overall retail business in 2014.

To see where the optimists in the spectrum come up with higher value, consider an alternative narrative, where Amazon’s market power is unchecked allowing it to expand into more extensively in the media market (with revenues of $329 billion in year 10) and earn an operating margin of 12.84% (the 75th percentile of retail/media firms). Those changes increase the value per share to $468/share.

To complete the process, consider the pessimistic narrative. In their story, they see Amazon as a company with a charismatic CEO (Jeff Bezos) who is less interested in creating a profitable business than he is in changing the retail world. In that story, Amazon will continue to grow revenues with little attention paid to margins, with the end game being world domination (at least of the retail business). In the valuation, that translates into higher revenue growth and paper-thin operating margins (2.85%, the 25th percentile of large US retail/media firms), even in steady state, the value per share drops to $32/share.

I followed up my post on narratives and numbers with one on how a change, shift or break in the narrative can translate into a significant change in value, and why the conventional view that intrinsic value, if done right, is timeless is nonsense. Using earnings reports as the vehicles that deliver news about narratives, I looked at my narratives for Apple, Twitter and Facebook in August 2014, and valued them. Since the last few weeks have brought new earnings reports from all three companies, I will be doing an updated version of that post in the next few days.

If you are a number cruncher, this process may seem too free form and subjective to you, and if you are a storyteller, the numbers will seem made up. To me, though, it is the essence of valuation and If you are interested in my extended discussion of this process of connecting narratives to numbers, you may want to take a look at this keynote talk that I gave at the CFA Institute Conference last year. I have to warn you that the length of the webcast (almost 3 hours) could lead you to seek the protection of the Geneva Conventions.

Tie to the life cycle: The Investor Angle


While narrative and numbers are tied together in every company’s valuation, the importance of each in driving value will shift over a company’s life cycle, as it evolves from a start up to a mature firm to one in decline. Very early in the life cycle, when numbers on the company are either scarce or uninformative, it is almost entirely narrative that drives value. In addition, that narrative can also have a much wider range of possibilities and end values, depending on the path that you map out for the company. In December 2014, I let readers pick their narrative for Uber and mapped out widely divergent values (ranging from less than $1 billion to in excess of $90 billion) for the company, based on the narrative path picked.

As companies mature, the numbers start to get weighted more, as it becomes more difficult for companies to not only break away from the past, but the pathways narrow. If you are valuing Coca Cola, for instance, it is more difficult to visualize explosive breakaways (either up or down in the narrative), though not impossible.  If you are an investor uninterested in valuing companies, there are still lessons that you can draw from the link between where a company is in its life cycle and the importance of narrative/numbers.
Tie to the Life Cycle: Implications for managers
The link between narratives and value has implications for those who run businesses and for what defines success for a top manager as companies move through the life cycle.
I have tried to capture the change in balance between narrative and numbers, with the management qualities that are most needed at each stage in the picture below: 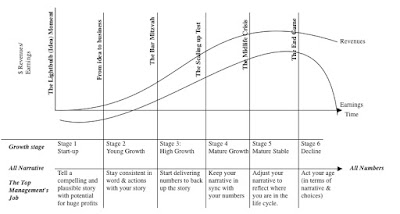 As a company makes it move from young start-up to growth company to mature business, the characteristics that make up a good CEO will change as well. One argument for a strong board of directors and shareholder power even at a well managed young company is that there may well come a time when the top management has to change with the times or be changed.

Work on your weak side
There is no one path to valuation nirvana, but I think that you need to find a balance between your storytelling and your number crunching skills, for your valuations to have heft. This balance may come easier to you than it did to me, since my natural instincts are to go with the numbers, and building my storytelling side has been slow going, at times. With each valuation that I do, I still have to force myself to be explicit about the narrative that I am building my valuation around, even when it seems obvious, and each time I do it, it gets a little easier. If you are a natural storyteller, you will probably find yourself resisting just as strongly to working with numbers, but I believe that you too will find a way to strengthen your weak side. I would like to think that a valuation that is the result of both sides of my brain working together is better than one that emerges out of only my left side, but even if it is not, it is a lot more fun getting there.

Dear Professor,
I respectfully disagree with your Amazon assumptions leading to distortions in valuation in my opinion.
1. Amazon is a two-part story: AWS and Amazon each should be valued separately and each is a leader by a far margin.
2. Amazon is mistakenly valued based on GAAP revenue and not GMV. Please note that Amazon GMV is expected to pass 220 Billion in 2015.
3. Amazon makes a lot of non GAAP profit. Please check "cash flow from financing activities" over its public history. It has made no capital increase and minimal debt use. Kindly, correct me if I am wrong, but I do not think any company can grow like this without profits to reinvest. It tries to expense everything and pays minimal tax in the process.

Azam,
Fair enough.
1. On the two part story, you may very well be right. One is their own retail wing. The other is their online platform being offered to other retailers. While the revenues from the latter may be large, the margins will be paper thin because you are just an intermediary. I will try to break them out into two channels on my next valuation.
2. The revenue is just an computational starting point. The driver is income, which is revenue * margin. If you replace GAAP revenue with GMV, you will have a much larger number but your margins will be much smaller.
3. You are right about the expensing, but I don't think Amazon makes lots of non-GAAP profit. You can go product by product and on every one, you will see that Amazon sells at cost. Even Amazon does not claim to make money. It just promises that it will find a way soon to do so.

I am currently writing my master's thesis about DCFs in startups. Where can I find your blog post about DCF myth 3?

Jonas,
I did not get around to posting on the third myth and beyond (because I got distracted and moved on). I have a paper on the topic, though, that you may find interesting:
http://papers.ssrn.com/sol3/papers.cfm?abstract_id=2323621
Hope you find it useful.