January 2016 Data Update 8: Pricing, with an end of month update

If you have been tracking the posts that I have about my data updates, you probably noticed that early on, I had planned eight posts but that this shrunk to seven by the time I was done. The reason was that the last post that I was planning to make was going to be on pricing numbers, i.e., the multiples that companies are trading at around the world, relative to book value and earnings. However, as the market dropped in January, I decided that posting the PE and EV/EBITDA multiples from January 1, 2016, would be pointless, since the numbers would be dated. I was also considering a post on the stock market turmoil during the month, and during the weekend, I decided that I could pull off a combined post, where I could look at both the pricing on January 1, and how it has changed during January 2016, by region, country and sector.

The US story, as told through the ERP
In my very first post this month, I looked at the equity risk premium for the S&P 500 on January 1, 2016, and estimated it to be 6.12%, based on dividends and buybacks over the last 12 months. I noted my discomfort with the fact that the cash returned in those twelve months exceeded the earnings, and estimated a buyback adjusted ERP of 5.16%, with buybacks reduced over time to a sustainable level. As in prior volatile months, I computed the ERP at the end of each trading day, using both measures of cash flows (trailing 12 months and modified to reflect earnings). The numbers are in the table below:
The ERP rose about 0.60% (on both measures) during the month to peak on January 20, though it dropped back again in the last few days of the month. It is true that I left the cash flows and growth periods unchanged over the trading days, and that the bad news of the month may reverberate, with lower buybacks and growth expectations in the coming months. thus, the increase in the ERP is exaggerated, but, in my view, the bulk of the change will remain. The essence of a crisis month, like this one, is that the price of risk will increase during the month.

The Five Trillion Dollar Heist: Who did it?
The month started badly, with the Chinese markets dropping on the first trading day of the year and taking other markets down with them. Much of the month followed in the same vein, with extended periods of market decline followed by strong up days. Oil and China continued to be the market drivers, with oil prices continuing their inexorable decline and news of economic slowdown from China coming in at regular intervals. The damage inflicted during the month is captured in the chart below:

The global equity markets collectively lost $5.54 trillion in value during the month, roughly 8.42% of overall value. The global breakdown of value also reflects some regional variations, with Chinese equities declining from approximately 17% of global market capitalization to closer to 15%. To the question of how the month measures up against the worst months in history, the good news is that there have been dozens of months that delivered worse returns in the aggregate. In fact, the US equity market's performance in January 2016 would not even make the list of 25 worst months in US market history, all of which saw double-digit losses or worse or even the 50 worst month list.

Whodunnit? Surveying the Regional Damage
As you can see in the pie chart, the pain was not inflicted equally across the world. China was the worst affected market and the details of the damage by region are captured in the table below.

Not only did mainland Chinese stocks lose more than 20% of their market capitalization, more than 75% of all stocks in that country dropped more than 10% and 59% dropped by more than 20%; Hong Kong listings fared a little better, but still managed to come in second in the race for worst regional market. Indian and Japanese stocks were hard hit, but the rest of Asia (small Asia) did not do as badly. Among the developed markets, Australia was the worst affected but the UK, US and EU regions saw market capitalizations drop by 6-7%.

If you are a knee-jerk contrarian, you may be tempted to jump into the Chinese market, especially since mainland Chinese stocks traded at 15.73 times earnings, on January 31, 2016, down from 20.28 times earnings at the start of the month, and Hong Kong based Chinese stocks look even cheaper. In the global heat map below, you can look up how stock markets fared in each country during January 2016 and pricing multiples at which equities are trading at the end of the month.

The Sector Effects
Just as the market damage varied across countries in January 2016, it also varied across industry groupings. Using my industry categorization, I looked at the change in market capitalizations, by industry, and key pricing multiples (PE, Price to Book, EV to EBITDA, EV to Invested Capital) at the start and end of January 2016. The entire list can be downloaded at this link, but the fifteen industries that fared the worst, in terms of drop in market capitalization, are listed below:

The biggest surprise, given the news about continued drops in oil prices, is that none of the oil groupings (I have four) showed up on the list, with integrated oil companies dropping only 4.20%  and oil distribution companies dropping 8.93% during the month. Not surprisingly, there are a host of cyclical companies on this list, but biotech and electronics companies also suffered large drops in value. Looking at the fifteen industries that fared the best during the month, tobacco topped the list, as one of the three industries that managed to post positive returns, with utilities and telecom services being the other two. 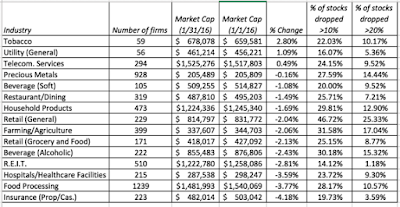 Precious metals did well, reflecting the tendency of investors to flee to them during crisis, but most of the rest of the list reflects industries that sell the essentials (food and household products, health care).


As investors, we often feel the urge to extrapolate from small slices of market history, and I am sure that there will be some who see great significance in the last month's volatility. They will dredge up temporal anomalies like the January effect to explain why stocks are doomed this year and that if Denver wins the Super Bowl, it is going to be catastrophic for investors. I am not willing to make that leap. What I learned from January 2016 is that stocks are risky (I need reminders every now and then), that market pundits are about as reliable as soothsayers, that the doomsayers will remind you that they "told you so" and that life goes on. I am just glad the month is over!

Data Update Posts
Posted by Aswath Damodaran at 9:40 AM

Just a short question:
"Using my industry categorization, I looked at the change in market capitalizations, by industry, and key pricing multiples (PE, Price to Book, EV to EBITDA, EV to Invested Capital) at the start and end of January 2016."

I cannot see the pricing multiple for the country heat map from chartbin when I roll-over it. Can you please help me find it. Thanks as always for the insightful posts.

I cannot see the pricing multiple for the country heat map from chartbin when I roll-over it. Can you please help me find it. Thanks as always for the insightful posts.