The earnings season is upon us once again, the quarterly rite of passage where companies report their earnings results, the numbers get measured up against expectations, expectations get reset and prices adjust. As an investor, I sometimes find the process unsettling, but as a market observer, I cannot think of a better Petri dish to illustrate both the magic of markets and the vagaries of human behavior. This earnings season has been among the violent, in terms of market reaction, in quite a few years, as tens of billions of dollars in market capitalization have been wiped out overnight in some high flyers. In order to get perspective during these volatile times, it helps me to go back to a contrast that I have drawn before between the pricing and value games and how they play out, especially around earnings reports.

Price versus Value: The Information Effect
In finance, we use the words price and value, as if they were interchangeable and I have sometimes been guilty of this sin. It is worth noting that price and value not only come from different processes and are determined by different variables, but can also yield different numbers for the same asset at the same point in time. I try to capture the difference in a picture:

The essence of value is that it comes from a company's fundamentals, i.e., its capacity to generate and grow cash flows; you can attempt to estimate that value using accounting numbers (book value) or intrinsic valuation (discounted cash flow). Fundamental information causes changes in a company's cash flows, growth or risk and by extension, will change its value. Pricing is a market process, where demand and supply intersect to produce a price. While that demand may be affected by fundamentals, it is more immediately a function of market mood/sentiment and incremental information about the company, sometimes about fundamentals and sometimes not.

In an earlier post, I drew a distinction between investors and traders, arguing that investing is about making judgments on value and letting the price process correct itself, and trading is about making judgments on future price movements, with value not being in play. While the line between fundamental and incremental information is where the biggest battles between investors and traders are fought, it is not an easy one to draw, partly because it is subjective and partly because there are wide variations within each group on making that assessment. For instance, consider Apple, a company followed closely by dozens of analysts, and its earnings report on January 26, 2016. The company beat earnings expectations, delivering the most profitable quarterly earnings in corporate history, but also sold fewer iPhones than expected; the company lost almost $30 billion in market capitalization in the immediate aftermath. An investor valuing the company based on dividends would conclude that it was an overreaction, since not only are dividends not under immediate threat but the cash balance of $200 billion plus should allow the company to maintain those dividends in the  long term. A different investor whose valuation of the company was based on its operating cash flows might have viewed the same information as more consequential, especially since 65-70% of Apple's cash flows come from iPhones. A trader whose pricing of Apple is based on iPhone units sold would have drastically lowered the price for the stock, if his expectations for sales were unmet, but another trader whose pricing is based on earnings per share, would have been unaffected.

Earnings Reports: The Pricing and Value Reaction
While almost any story (rumor, corporate announcement) can be incremental information, it is quarterly earnings reports that keep the incremental information engine running, as revelations about what happened to a company in the most recent three-month period become the basis for reassessments of price and value.

Earnings Reports: The Pricing Game
The way traders react to earnings reports is, at least on the surface, uncomplicated. Investors form expectations about what an earnings report will contain, with analysts putting numbers on their expectations. The actual report is then measured up against expectations, and prices should rise if the actuals beat expectations and fall if they do not. The picture below captures this process, with potential complications thrown in. 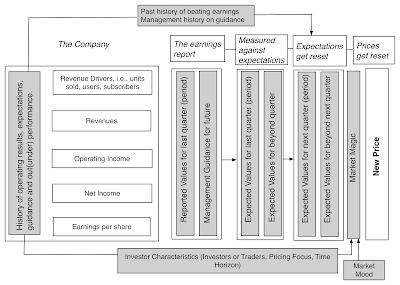 While the game is about actual numbers and expectations, it remains an unpredictable one for three reasons. The first is that the price catalyst in the earnings report, i.e, whether the market reacts to surprises on management guidance, revenues, operating income or earnings per share, can not only vary across companies but across time for the same company. The second is that while analyst expectations are what we focus on and get reported, the market's expectations can be different. The third is that the effect on stock prices, for a given surprise (positive or negative) can be different for different companies and in different time periods.
Earnings Reports: The Value Game
It is difficult to characterize the value game, precisely because it is played so differently by its many proponents. Some old-time value investors' concept of value is tied to dividends and other value investors are more open to expanding their measures of cash flows. To me, the one area where there should be agreement across investors is that every good intrinsic valuation should be backed by a narrative that not only provides structure to the numbers in the valuation, but also provides them with credibility. As I noted in this post from August 2014, it is this framework that I find most useful, when looking at earnings reports and I capture the "value" effect of earnings reports in this picture: 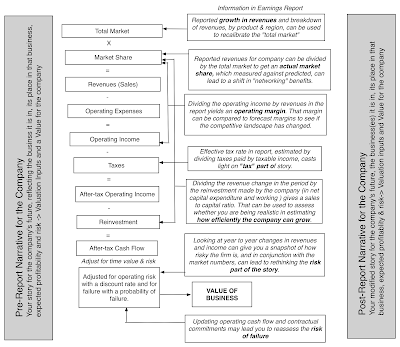 If you accept the notion that value changes when your narrative changes, the following propositions follow:

If you believe, like I do, that investing requires you to constantly revisit and revalue the companies that you have or wish you to have in your portfolio, new earnings reports from these companies provide timely reminders that no valuation is timeless and no corporate narrative lasts forever.

The Rest of the Story
This post has gone on long enough, but it will be the first in a series that I hope to do around earnings reports, built around four topics.


Blog posts in this series
Posted by Aswath Damodaran at 1:05 PM

Love the focus on simplicity and perspective around pricing and value. Your suggestions are useful nuggets for new investor and reminders for seasoned pros.

if the efficient markets hypothesis holds, is price the same as value?