Myth 5.1: If you don't believe in forever, you cannot do a DCF

If you are not interested in intrinsic valuation and feel that discounted cash flow valuation (DCF) is a waste of your time, you may want to skip these next few posts, which continue a series that I started more than two years ago on myths that surround DCF.  While these posts may strike you as esoteric and perhaps even obsessive, I wrote them for two reasons: these misconceptions lead to time-wasting debates among analysts and  they have economic consequences, costing business owners, investors and taxpayers large amounts of money. In these next few posts, I focus on the terminal value, which is, by far, the largest single cash flow in any discounted cash flow valuation.  As a consequence, it is not only the number that causes the most disagreement among analysts but it also remains the source for the most egregious errors in valuation.

The Closure Factor
To understand the role that a terminal value plays in a discounted cash flow valuation, let us revisit the equation that characterizes a DCF:

The challenge that we face in valuation is in how best to estimate this terminal value.

Three Acceptable Approaches to Estimation
In presenting terminal value in discounted cash flow valuation, many (including those who write the books and teach classes on the topic) presume that there is only way to estimate terminal value and that is to assume that your cash flows grow at a constant rate forever.

In fact, the presumption of there being only one way to estimate the terminal value is wrong. Within the present value framework, there are two simple devices that exist that allow us to make this judgment without breaking the basis for the model.
1. If it is a finite life asset (say 40 or 50 years), you can use an annuity or growing annuity formula to compute the terminal value. For instance, consider a 40-year asset with the following cash flows:


The value of this asset, with a risk-adjusted discount rate of 8%, can be written as follows:

The last term is the present value of the cash flows from years 6 to 40 (35 years of cash flows), with the growing annuity equation delivering a value at the start of year 6, which is also effectively the end of year 5, and the second discounting factor (1.08^5) bringing it back to today. If this asset’s cash flows had lasted forever, growing at 2% a year forever, the last term simplifies further:

As the life of the asset increases, the value quickly converges to this perpetual value, as shown in the graph below. 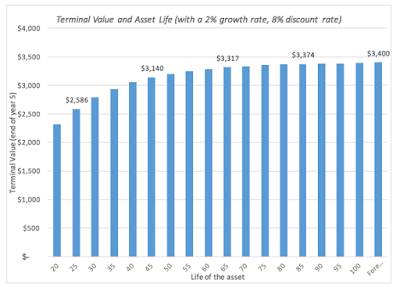 The terminal value (at the end of year 5) is $3,317, with a 65-year life, and $3400, if you assume the asset lasts forever, thus providing an explanation for why we are so cavalier about making the assumption that cash flows grow forever when valuing companies.
2. There is one other legitimate way of estimating the terminal value in a discounted cash flow valuation and that is to assume that at the end of your forecast period, your business will cease to be a going concern and will liquidate its assets individually. Thus, in the example above, if you assume that the business will be shut down after 5 years and that its assets can be liquidated for $2,000, you could use the liquidation value as your terminal value.
Faced with the question of whether to use going concern value or liquidation value, it is common sense that dictates the answer. If you are valuing a privately owned restaurant or retail store, with a favorable lease on a prime location, you may decide to value the business over the remaining life of the lease rather than assume a continuing business, simply because a lease renegotiation could very quickly change the economics of the business. Similarly, when valuing a personal services business with an aging owner, you should recognize that the actuarial tables will conflict with the "forever" assumption.

And One Non-starter: A Trojan Horse DCF
There is a third way that is used to estimate terminal value that undercuts the notion of intrinsic value, which is what DCF is designed to measure. That is the use of a multiple of some operating metric (revenues, earnings etc.) in your terminal year to get to a terminal value. In almost every case where this is done, the multiple that is used to estimate the terminal value comes from looking at what peer group companies trade at, in the market today. Thus, if telecomm companies collectively trade at a EV/EBITDA multiple of six today, that multiple is used on the EBITDA in year n to arrive at a terminal value.

That makes he biggest number in your DCF a pricing, and it is for this reason that I labeled these “Trojan Horse” valuations in my post on dysfunctional DCFs. As have argued in multiple posts, there is nothing wrong with pricing a business and that may be what you are asked to do, but if that is the case, you should do a simple pricing and not go through the charade of estimating cash flows and discount rates, giving the patina of an intrinsic value estimate.

Conclusion
As in my posts on discount rates, I would like to emphasize that the DCF approach is much more flexible than people give it credit for being. Thus, if your pet peeve with DCFs is the assumption that cash flows last forever and keep growing, it is time to let go of that grievance.  There are other ways of estimating the terminal value that you should be more comfortable with and that you can substitute for the perpetual growth model. The only cautionary note is that using a multiple obtained by looking at what peer group companies introduces an overwhelming pricing element into your intrinsic valuation.

Thank you very much for your post. I have looked through your PV Calculator worksheet and found what seems to be an error in the formula for growing annuity (GA). To be more specific, the denominator inside the brackets refers to cell F13, which is an annualised discount rate; in stead, I believe, it should refer to the cell D19, which is the discount rate per period. Absent this correction, if there is more than one compounding period during the year, growing annuity results will yield too large a value. For example, leaving all the values already provided in the worksheet intact and simply changing the first parameter to GA, one would get a value of $15,975.07 with annual compounding. Changing compounding period to 2, will result in a value of $81,698.57; however good the power of compounding is, this drastic increase in PV was way too strange to me, which made me dive into the formula. If we make the above-mentioned correction, the result will be a more manageable $33,097.86.
I would greatly appreciate if you could confirm my suspicions.