In my last post, I looked at hurdle rates for companies, across industries and across regions, and argued that these hurdle rates represent benchmarks that companies have to beat, to create value. That said, many companies measure success using lower thresholds, with some arguing that making money (having positive profits) is good enough and others positing that being more profitable than competitors in the same business makes you a good company. In this post, I will look at all three measures of success, starting with the minimal (making money), moving on to relative judgments (and how best to compare profitability across companies of different scales) and ending with the most rigorous one of whether the profits are sufficient to create value.

Measuring Financial Success
You may start a business with the intent of meeting a customer need or a societal shortfall but your financial success will ultimately determine your longevity. Put bluntly, a socially responsible company with an incredible product may reap good press and have case studies written about it, but if it cannot establish a pathway to profitability, it will not survive. But how do you measure financial success? In this portion of the post, I will start with the simplest measure of financial viability, which is whether the company is making money, usually from an accounting perspective, then move the goal posts to see if the company is more or less profitable than its competitors, and end with the toughest test, which is whether it is generating enough profits on the capital invested in it, to be a value creator.

Profit Measures
Before I present multiple measures of profitability, it is useful to step back and think about how profits should be measured. I will use the financial balance sheet construct that I used in my last post to explain how you can choose the measure of profitability that is right for your analysis:

Just as hurdle rates can vary, depending on whether you take the perspective of equity investors (cost of equity) or the entire business (cost of capital), the profit measures that you use will also be different, depending on perspective. If looked at through the eyes of equity investors, profits should be measured after all other claim holders (like debt) and have been paid their dues (interest expenses), whereas using the perspective of the entire firm, profits should be estimated prior to debt payments. In the table below, I have highlighted the various measures of profits and cash flows, depending on claim holder perspective:

The Minimal Test: Making money?
The lowest threshold for success in business is to generate positive profits, perhaps the reason why accountants create measures like breakeven, to determine when that will happen. In my post on measuring risk, I looked at the percentages of firms that meet this threshold on net income (for equity claim holders), an operating income (for all claim holders) and EBITDA (a very rough measure of operating cash flow for all claim holders). Using that statistic for the income over the last twelve month, a significant percentage of publicly traded firms are profitable:
The push back, even on this simplistic measure, is that just as one swallow does not a summer make, one year of profitability is not a measure of continuing profitability. Thus, you could expand this measure to not just look at average income over a longer period (say 5 to 10 years) and even add criteria to measure sustained profitability (number of consecutive profitable years). No matter which approach you use, you still will have two problems. The first is that because this measure is either on (profitable) or off (money losing), it cannot be used to rank or grade firms, once they have become profitable. The other is that making money is only the first step towards establishing viability, since the capital invested in the firm could have been invested elsewhere and made more money. It is absurd to argue that a company with $10 billion in capital invested in it is successful if it generates $100 in profits, since that capital invested even in treasury bills could have generated vastly more money.

The Relative Test: Scaled Profitability
Once a company starts making money, it is obvious that higher profits are better than  lower ones, but unless these profits are scaled to the size of the firm, comparing dollar profits will bias you towards larger firms. The simplest scaling measure is revenues, a data item available for all but financial service firms, and one that is least likely to be affected by accounting choices, and profits scaled to revenues yields profit margins. In a data update post from a year ago, I provided a picture of different margin measures and why they might provide different information about business profitability:

In the graph below, I look at the distribution of pre-tax operating margins and net margins globally, and provide regional medians for the margin measures: 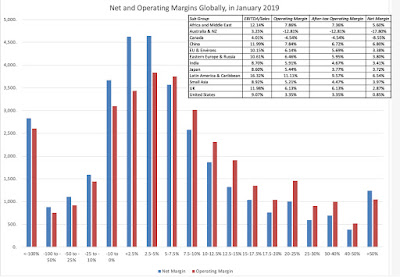 The regional comparisons of margins are difficult to analyze because they reflect the fact that different industries dominate different regions, and margins vary across industries. You can get the different margin measures broken down by industry, in January 2019, for US firms by clicking here. You can download the regional averages using the links at the end of this post.

The Value Test: Beating the Hurdle Rate
As a business, making money is easier than creating value, since to create value, you have to not just make money, but more money than you could have if you had invested your capital elsewhere. This innocuous statement lies at the heart of value, and it is in fleshing out the details that we run into practical problems on the three components that go into it:
In a perfect world, you would scale your expected cashflows in future years, adjusted for time value of money, to the correct amount of capital invested in the business and compare it to a hurdle rate that reflects both your claim holder choice (equity or the business) but also the risk of the business. In fact, that is exactly what you are trying to do in a good intrinsic or DCF valuation.

Since it is impossible to do this for 42000 plus companies, on a company-by-company basis, I used blunt instrument measures of each component, measuring profits with last year's operating income after taxes, using book value of capital (book value of debt + book value of equity - cash) as invested capital: 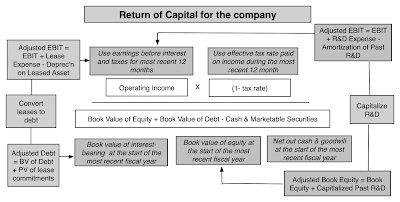 Similarly, to estimate cost of capital, I used short cuts I would not use, if I were called up to analyze a single company: 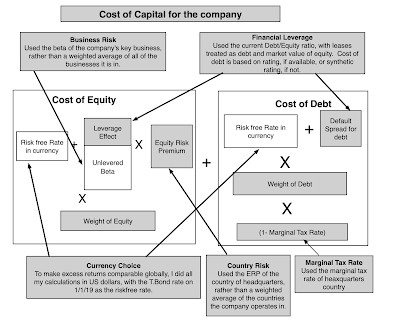 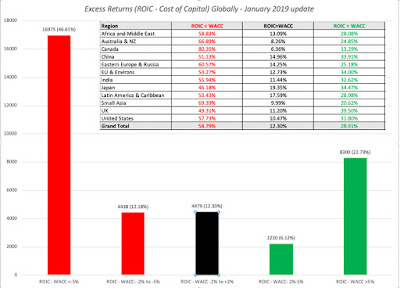 I am aware of the limitations of this comparison. First, I am using the trailing twelve month operating income as profits, and it is possible that some of the firms that measure up well and badly just had a really good (bad) year. It is also biased against young and growing firms, where future income will be much higher than the trailing 12-month value. Second, operating income is an accounting measure, and are affected not just by accounting choices, but are also affected by the accounting mis-categorization of lease and R&D expenses. Third, using book value of capital as a proxy for invested capital can be undercut by not only whether accounting capitalizes expenses correctly but also by well motivated attempts by accountants to write off past mistakes (which create charges that lower invested capital and make return on capital look better than it should). In fact, the litany of corrections that have to be made to return on capital to make it usable and listed in this long and very boring paper of mine. Notwithstanding these critiques, the numbers in this graph tell a depressing story, and one that investors should keep in mind, before they fall for the siren song of growth and still more growth that so many corporate management teams sing. Globally, approximately 60% of all firms globally earn less than their cost of capital, about 12% earn roughly their cost of capital and only 28% earn more than their cost of capital. There is no region of the world that is immune from this problem, with value destroyers outnumbering value creators in every region.

Implications
From a corporate finance perspective, there are lessons to be learned from the cross section of excess returns, and here are two immediate ones:
You can see the variations in excess returns across industries, for US companies, by clicking on this link, but there are clearly lots of bad businesses to be in. The same data is available for other regions in the datasets that are linked at the end of this post.

If there is a consolation prize for investors in this graph, it is that the returns you make on your investment in a company are driven by a different dynamic. If stocks are value driven, the stock price for a company will reflect its investment choices, and companies that invest their money badly will be priced lower than companies that invest their money well. The returns you will make on these companies, though, will depend upon whether the excess returns that they deliver in the future are greater or lower than expectations. Thus, a company that earns a return on capital of 5%, much lower than its cost of capital of 10%, which is priced to continue earning the same return will see if its stock price increase, if it can improve its return on capital to 7%, still lower than the cost of capital, but higher than expected. By the same token, a company that earns a return on capital of 25%, well above its cost of capital of 10%, and priced on the assumption that it can continue on its value generating path, will see its stock price drop, if the returns it generates on capital drop to 20%, well above the cost of capital, but still below expectations. That may explain a graph like the following, where researchers found that investing in bad (unexcellent) companies generated far better returns than investing in good (excellent) companies:
The paper is dated, but its results are not, and they have been reproduced using other categorizations for good and bad firms. Thus, investing in the most admired firms generates worse returns for investors than investing in the least admired and investing in popular (with investors) firms under performs investing in unpopular ones. While these results may seem perverse, at first sight, that bad (good) companies can be good (bad) investments, it makes sense, once you factor in the expectations game.

Finally, on the corporate governance front, I feel that we have lost our way. Corporate governance laws and measures have focused on check boxes on director independence and corporate rules, rather than furthering the end game of better managed companies. From my perspective, corporate governance should give stockholders a chance to change the way companies are run, and if corporate governance works well, you should see more management turnover at companies that don't earn what they need to on capital. The fact that six in ten companies across the globe earned well below their cost of capital in 2018, added to the reality that many of these companies have not only been under performing for years, but are still run by the same management, makes me wonder whether the push towards better corporate governance is more talk than action.