Country Risk, Return and Pricing: The Global Landscape in January 2015

Advance warning: I apologize. I went a little over-the-top with heat maps in this post. They are neat, though, since you can hover over a country (with your mouse or clicker) and you should be able to see the data for that country. If you prefer your data in old-fashioned tables, they are available as links at the bottom of the post.

I am happy to say that I am done with my data updates for 2015. While I like analyzing data, I am glad that I will not have to work with really big and sluggish excel spreadsheets until next year. Following up on my last post on US equity risk premiums, I thought it would make sense in this one to go global and take a look at the numbers, as they stand in January 2015. I am well aware that the global landscape of pricing and risk can change at the drop of a hat, but knowing what they changed is always useful.

As an investor, I am not sure how these numbers should affect my investment choices for the coming year. While the contrarian in me is telling me to avoid the winning markets and seek out the losing ones, I have learned through painful experiences to respect momentum enough not to be a blind contrarian. As a consequence, I will stick with my base plan of valuing individual companies, no matter what country they are incorporated or operate in, and looking for under valued companies.

Country Risk
To estimate value for companies, though, I do have to wrestle with measuring risk globally, and variations in risk across countries. For the last two decades, I have been trying to measure country risk and have reported my estimates annually. While I am ultimately interested in measuring exposure to equity risk, I start with measures of default, because they are more easily available and are easier to connect to expected returns.

The most widely reported measure of sovereign default risk are sovereign ratings, with Moody’s, Standard and Poor’s and Fitch all providing this service. The attached spreadsheet uses the January 1, 2015, data from S&P and Moody’s to provide a comprehensive listing of the local currency sovereign ratings of all rated countries. The following picture captures the breakdown, at least in January 2015, of countries by broad ratings classes (using Moody's sovereign ratings where available and S&P's converted into Moody's ratings, for a few countries):

One critique of sovereign ratings is that they often lag developments in the real world, with changes in ratings occurring well after investors have priced in the changes. The sovereign CDS market provides market-based estimates of sovereign default risk, though only 68 countries have sovereign CDS spreads (far fewer than the 142 countries that have sovereign ratings available on them). The table below lists the sovereign CDS spreads for all available markets in January 2015 (and is also available as a downloadable spreadsheet):
Both sovereign ratings and CDS spreads are measures of default risk and investors in search of a wider measure of country risk (which extends beyond default into political and legal risk) may want to take a look at the composite risk scores reported by the Political Risk Services (PRS) group. The PRS composite risk score, is scaled to 100, with higher numbers reflecting more risk. Using the most recent values for these scores, I have created a risk map:

The red spots in the map are the most risky countries in the world, at least according to the PRS measure in January 2015.

As I mentioned up front, my end game requires equity risk premiums by country. I started with the sovereign ratings (since they are available for more countries and then used the look up table below to estimate default spreads by country. 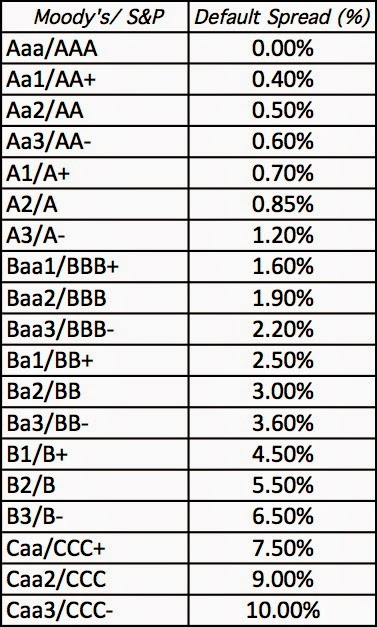 At this stage, if you are primarily an investor in US companies, you may be heaving a sigh of relief that you don’t have to deal with these country risk measures, but your relief should be short lived. Since a company’s risk exposure comes from where it operates and not from where it is incorporated, most US companies (including small ones) operate in multiple countries and it is the weighted average of the equity risk premiums across countries that should be used in valuing these companies.

Country Pricing
It is true that some markets are riskier than others, but a knee jerk avoidance of the riskiest markets may not always be a good strategy. After all, at the right price even the riskiest market can be a bargain. To get a measure of how global markets are being priced right now, I estimated a range of pricing multiples including price earnings ratios. EV/EBITDA and price to book value ratios for all of the countries in my sample. Note, as you look at these numbers, that some of the markets (especially in Africa) that I look at are very small with only a handful of listings and that the ratios computed for these markets have to be taken with a grain of salt.

Starting with PE ratios, here is what I find, as I look across the globe at the start of 2015.


The countries with the lowest PE ratios are highlighted in red, though hovering over the spots will give you a quick measure of why they might not be bargains.

Moving on to EV/EBITDA multiples and looking for bargains, here is what the global picture looks like in 2015:
The countries that trade at the lowest multiples of EBITDA are in red.

Completing the story with price to book ratios, the visualization yields the following.
Again, it should come as no surprise that the countries that trade at well below book value (colored red) also happen to be countries that are in crises.

Looking across all three multiples and listing out the countries that have the lowest values for each one in aggregate:
It is true that most of the countries on this list are also risky ones but that does end the analysis. If the essence of investing is looking for mismatches, you are looking for countries that trade at low prices (relative to earnings, book value or sales), after adjusting for risk. Much as I would like to go into ways of doing this, I think I have outlived my welcome in this post. So, it has to be put off for another day.

So what now?
If you are an investor, there are very few places left to hide from globalization. Very few companies operate in domestic market vacuums and most are exposed, sometimes in good ways and sometimes in bad ones, to changes in the global market landscape. In 2014, it was Russia that was the game changer in the first part but oil prices played the bigger role in the second half of the year. I am not sure what will move global markets in 2015 but I am sure it will be an interesting year.

How do you convert country ratings into default spreads? I do not see any calculation link in the worksheet.

I use the CDS spreads and dollar-denominated sovereign government bond spreads by country. I try to estimate the observed default spreads by ratings class and convert that into a lookup table.

Sorry Prof, I did see your lecture notes/books, but could not get the actual calculations to convert ratings into default spreads.

Would it be possible to share the worksheet (any past or current will do) where actual conversions are made? It would be helpful for us to review it, and make our own conversions in future?

But isn't the CDS spread an arbitary number? Can it be really used to proxy for CRP?

Also, your whole model is based on the CAPM, while you've said it's not a very reliable model in the first place, further compounding the error. I'm aware that the CAPM assumptions are for the diversified marginal investor, but then the potential marginal investor(s) differ greatly in their exposures to securities and markets, so their relative valuations would be unique to each on a domestic scale, similarly when it comes to adjusting for the CRP on a global one, even if correlations between markets are shown to be weak.

Also, I'm interested in reading your response to “Damodaran's Country Risk Premium: A Serious Critique”. But I can't get a hold of it.

Off the topic...Did you revise your valuation for VALE? If not, are you buying more? Just curious..

Just a quick question - where are you getting your market return data for 2014? I'm based in MENA and these market returns don't look right to me at all - particularly for the UAE - this was maybe back in August / September, but certainly not by the end of the year...