The X Factor in Value: Excess Returns in Theory and Practice

There are lots of reasons why we try to start and run businesses. Some of them are emotional but the financial rationale for starting and staying in business is a simple one. It is to not just to make money, but to make more than what you would have made elsewhere with the capital (human and financial) invested in the business. Of course, your competitors, the government and sometimes the entire world seems to conspire against you (or at least it seems that way) to prevent you from making these “excess” returns.

The Search for and Scarcity of Excess Returns
In corporate finance, decision-making tools are constructed with the objective of earning and maximizing excess returns. Thus, the notion of net present value in capital budgeting is built on the presumption that an investment should earn more than what you would have generated as a return on an investment of equivalent risk.  In investing, the search for excess returns or alpha is just as intense, with traders, value investors and growth investors playing their own versions of the game.

While you can plan, hope and pray for excess returns, to earn them consistently, you have to bring something unique that cannot be easily replicated to the game. In the case of businesses, that something is a competitive advantage or a barrier to entry that allows them to continue generating returns that exceed their costs of capital, without competition driving down profitability to more "normal" levels. These competitive advantages can range from economies of scale (Walmart), to brand name (Coca Cola) to patents (Amgen), and while they are have to be earned, they are not uncommon. In the case of investors, those competitive advantages are not only rarer but also more difficult to defend, perhaps explaining why so few active investors beat index funds or the market.

The Measurement of Excess Returns
Assume that you have been given the task of measuring whether a company’s past investments have generated returns for that exceed their cost, i.e. excess returns. To measure excess returns generated by companies on their investments collectively, you need two numbers, the expected return on the investments, given their risk and alternative investment choices today, and the actual return earned on those investments.

While I have no qualms about using either return measure, the dependence on accounting statements for both the numerator and denominator trouble me.  It is not my objective in this post to belabor the definition of return on equity and capital. If you are interested, I have an extended discourse on the technical issues that you may face in computing accounting returns in this paper. 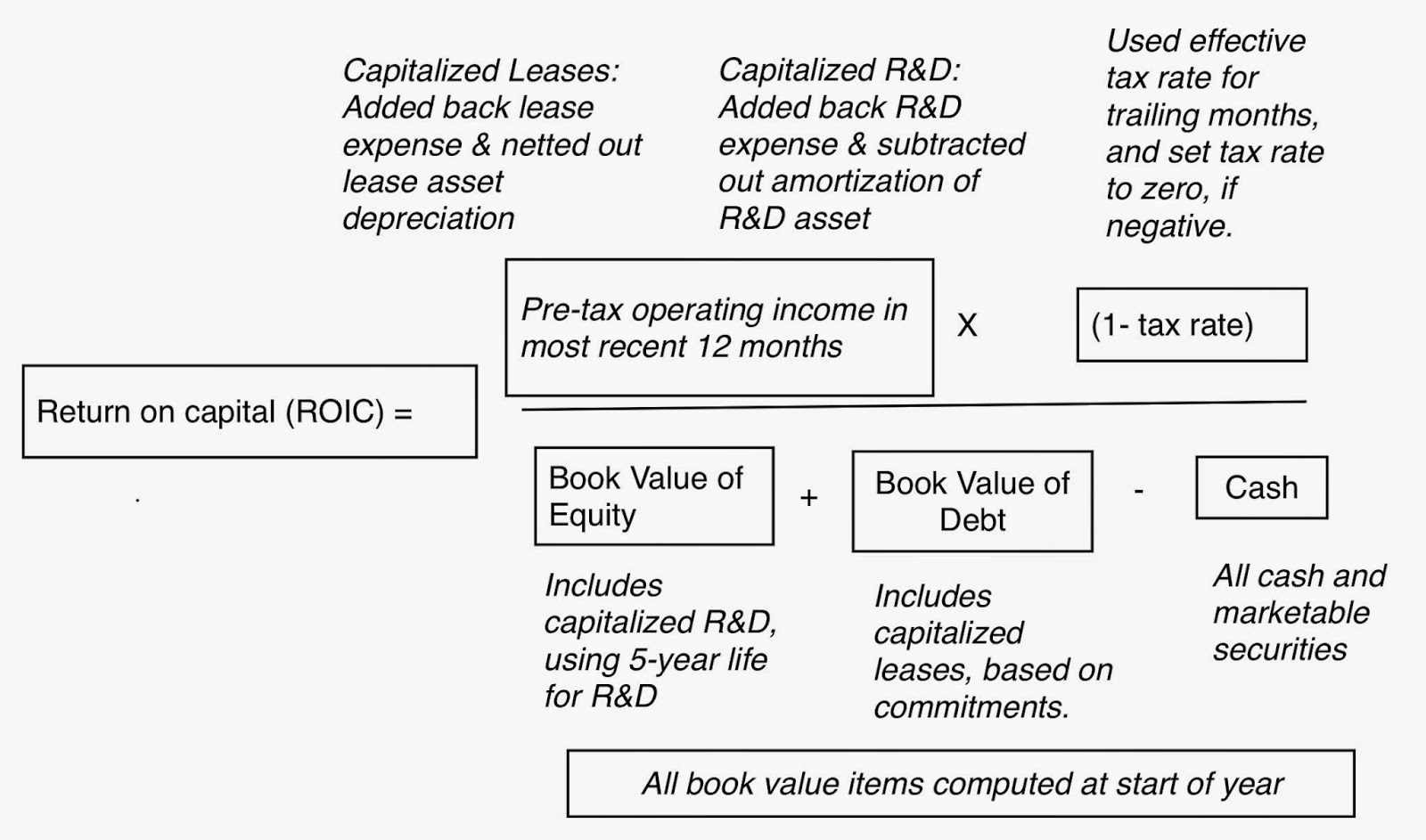 Note that I am using the effective tax rate to compute after-tax operating income, both at the industry and company level. For return on equity, I use a similar adjustment process:

I am well aware of the weaknesses in these measures. The first is the use of the most recent year's operating income in the numerator. Earnings at companies can vary over time and the most recent year may yield a number that is not representative of the company. (I did also use a ten-year average income to generate returns to try to counter this problem). The second is that the book value of equity is an accounting number and as such, is affected by accounting decisions on capitalization/expensing, depreciation and write offs. The third is that netting out the most recent period's cash balance, especially at technology or growth companies, can result in a negative invested capital. Finally, this measure, even if the earnings and invested capital are measured right, will be biased against young companies and companies investing in long-gestation period investments (infrastructure, toll roads etc.), since it will be low in the early years.

The Evidence on Excess Returns
Notwithstanding the many limitations of the excess return measure that I have described, I do think that there is value in looking at how firms measure up on it, across sectors and across the globe.

a. Across Sectors
To compute the return on capital for a sector, I used aggregated values for the operating income and invested capital across companies in the sector, rather than a simple average of the returns on capital of individual companies. I did this for two reasons. The first is that it allows me to keep all of the firms in my sample, rather than only the ones for which I can measure excess returns. The second is that it prevents outliers (hugely positive or negative excess returns that I may estimate for a firm, usually because of quirky accounting) from affecting the average. The third is to get a measure of weighted performance, where larger firms in a sector count for more than smaller firms.

I report the industry averages in this data in this dataset. In the table below, I report on the five industries, in the US and globally, that report the highest return spreads (a return on capital that most exceeds the cost of capital) and the five that had the lowest return spreads.
As with any measure, the rankings reveal as much about the quality of the measure as they do about the quality of the sectors. Tobacco companies are at the top of the list partly because repeated stock buybacks have depleted the book values of equity and invested capital, at last in the United States. Aerospace and defense is a volatile business and the high positive excess returns in 2014 can turn negative, if the airline business is troubled.

b. Across Countries
To look at excess returns across countries, I consolidated companies into five groups: US, emerging markets, Europe, Japan and Australia/NZ/Canada. I then looked at the individual companies within each group and how much they earned, relative to their costs of capital. The table below summarizes the distribution of companies, in terms of excess returns, in each region: 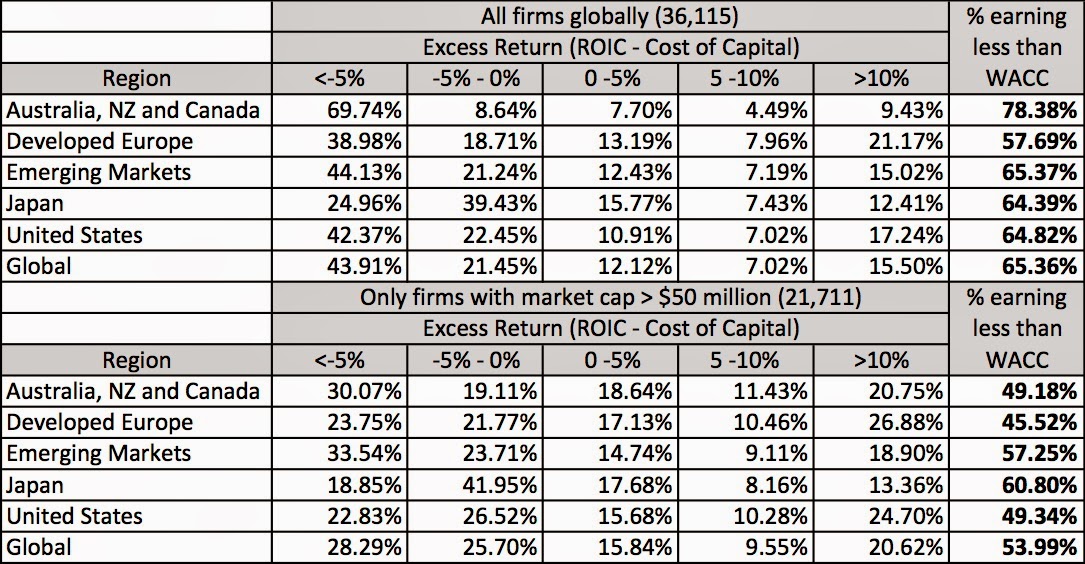 The most striking feature of the data, to me, is that the proportion of companies that earn less than their cost of capital, 65.36% of all companies and 53.99% of companies with market capitalizations that exceed $50 billion. That indicates either that competition is a lot more intense in more businesses than we think and/or that management at many of these companies are either unaware or indifferent that their businesses are not generating sufficient profits, given the risk.

What next?
This may reflect my biases but everyone should care about these excess returns. Investors should be valuing companies, based on their expectations of future expected returns, and pushing for change in companies that don't deliver them. Anti-trust regulators can use them as proxies for determining whether competition is adequate in markets and lawmakers should consider excess returns rather than absolute profits, in making public policy.

How do I apply this in a corporate (DCF(FCFF)) valuation. Do I use the invested capital and after tax operating income to calculate the base year's ROIC in absolute numbers (EVA) and do the same for incremental invested capital untill terminal year. Moreover is it fair to discount these values using the cost of capital. Also what would be my approach to discount ROIC at the terminal year do I assume it to be a perpetuity?

All intrinsic valuations are based upon implicit or explicit assumptions about the excess returns that you believe that your company will make in the near and far future. So, I am not sure what you mean by apply this.. I would look at industry averages, when valuing an individual company, for guidance about whether excess returns are common in a sector and whether I can assume that they will continue for the long term.

How would you deal with equity when calculating ROC/ROE for individual companies when there is a component within equity, called revaluation reserve? This reserve is an accounting mash-up where the accounting rules allow scaling up certain assets (other than marketable securities) to market values if the management wishes to.

This poses a problem, where say, 2 individual firms identical in all respects (cash flows, growth and risk) use different accounting rules, one revaluing certain of its assets and increasing equity by creating an asset revaluation reserve, and the other not choosing to do this. The former will have lower ROC/ROE (higher denominator) than the latter. How would you treat this?

More specifically, if your firm under valuation has this asset revaluation reserve within equity, how would you calculate ROC/ROE?

Okay a bit of context would've helped. I am doing a corporate valuation for a small cap company. I have calculated a reinvestment rate to find the investment needed to attain a certain revenue growth. I also have a dynamic cost of capital for the company, adjusting for its leverage and overall reduction in the riskfree rate. I would like to find the present value of all the excess returns the company would earn to asses its true performance. I guess my question should've been; is it alright for me to discount these excess returns using the cost of capital.

Prof. I was wondering why multi-factor models (FF3 or more) haven't made it into corporate finance computations? Wouldn't it add a more precise facet to the analysis?

This comment is an off-topic, sorry to bother you.

I cannot understand why your new Applied Corporate Finance cost more than 150$ on Amazon.com!!!!!!

<Professor, with European QE and eurobonds reaching the negative area (german bund) for example, what you think we need to do with the risk free rate??
it is possible a negative risk free rate!?
thanks

On the price of the Applied Corporate Finance book, I am sorry. Text book publishing is a business that deserves to get disrupted. It is inefficient, unfair and utterly irrational.

I am waiting for your response to my question on ROCE/ROE when there is asset revaluation reserve within equity. IFRS allows such treatment.

I am a bit confused about how to assess the real ROCE/ROE. Your response would help me.

Trying to reconcile the fact that companies in developed Europe, as per your data set, on the average, do much better in delivering excess returns than the other areas you considered with the economic growth levels of these areas.

If companies in developed Europe generally do much better in delivering excess returns, why is it not translating in higher growth numbers in their economies?

There are two pieces to delivering quality growth. One is to earn excess returns, and at least in 2014, European companies did better than companies in some other regions. The other is to reinvest a lot, which is where European companies fail. If every company takes only one project, the resulting growth will be low, even if that project is a great project.

I think you made one mistake in your valuation. Brazilian government control gasoline and diesel prices, and they will not let it drop. So, the revenue of petrobras will not drop that much.
As you said, petrobras sold gasoline at subsidized price to car owners during a long period, now the car owners will "subsidized" petrobras profit.