Putting the D in the DCF: The Cost of Capital

If there were a contest for the most measured number in finance, the winner would be the cost of capital. Corporate finance departments around the world compute it as an integral part of investment analysis. Appraisers estimate it as a step towards estimating intrinsic or discounted cash flow value. Analysts spend disproportionate amounts of their time working on it, though not always for the right reasons or with the right inputs. Since I have spent a significant portion of my life, writing and talking about cost of capital, it stands to reason that it is one of the numbers that I compute for all the companies in my data base at the start of every year. 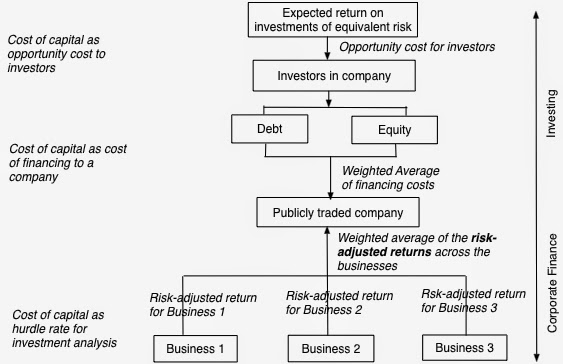 For this process to yield a number to meet all three requirements for cost of capital, i.e., that it be a cost of raising funding, an opportunity cost and a required return for investors, here are the requirements:
Estimating the Cost of Capital
Having laid the groundwork, let’s get down to specifics. If you, as an investor, are given the task of estimating the cost of capital for a company, here is the sequence of steps. First, you have to estimate the business risk in the company by taking a weighted average of the risks of the businesses that the company operates. Second, you have to adjust that risk measure for the effects of debt, which effectively magnifies your business risk exposure, and use the consolidated risk measure to estimate a cost of equity. Third, you have to bring in the cost of borrowing, net of any tax benefit, which will reflect the default risk in the company. Finally, taking a weighted average of the cost of equity and after-tax cost of debt yields a cost of capital. If you are approaching the same task as a CFO, you have to follow the same sequence to get a cost of capital for the company but you have to go further and estimate the costs of capital for the individual businesses that the company is invested in.

a. Cost of capital by sector
In my data updates each year, I estimate the cost of capital, by sector, for companies both globally and classified by region (US, Europe, Japan, Emerging Markets). In making these estimates, I first begin by breaking my total sample of 41,410 companies down into 96 industry groups, some of which may be far broader than you would like to see. I prefer this broad categorization for two reasons. First, I estimate a beta for each industry group by averaging the betas of the individual companies in that group, and these estimates are more precise with larger sample sizes. Second, from a first principles perspective, I believe that since betas measure risk from a macro risk perspective, you are better served with broader categories than narrow ones. Thus, rather than estimate the beta for shrimp fishing as a business, I would rather estimate the beta for food processing businesses (assuming that the only reason that people buy shrimp is to eat them.). Once I have the industry groups, I estimate the cost of equity for each group (in US dollar terms, by using a US dollar risk free rate and a equity risk premium in US dollar terms, though the magnitude of the premium can vary across countries and regions) by using the average beta across companies in the sector. For the cost of debt, I do have a problem, since all I usually have at the industry level is a book interest rate (obtained by dividing the interest expense by the book value of debt) which is not very useful from a cost of capital perspective. I use the variance in stock prices as an indicator of the risk and use it to estimate a default spread in US dollar terms, which then allows me to compute a cost of debt. As the final step, I use the industry average debt to capital ratios (in market value terms) to compute a cost of capital; in keeping with my view that lease commitments are debt, I convert lease commitments to debt for all companies in my database: 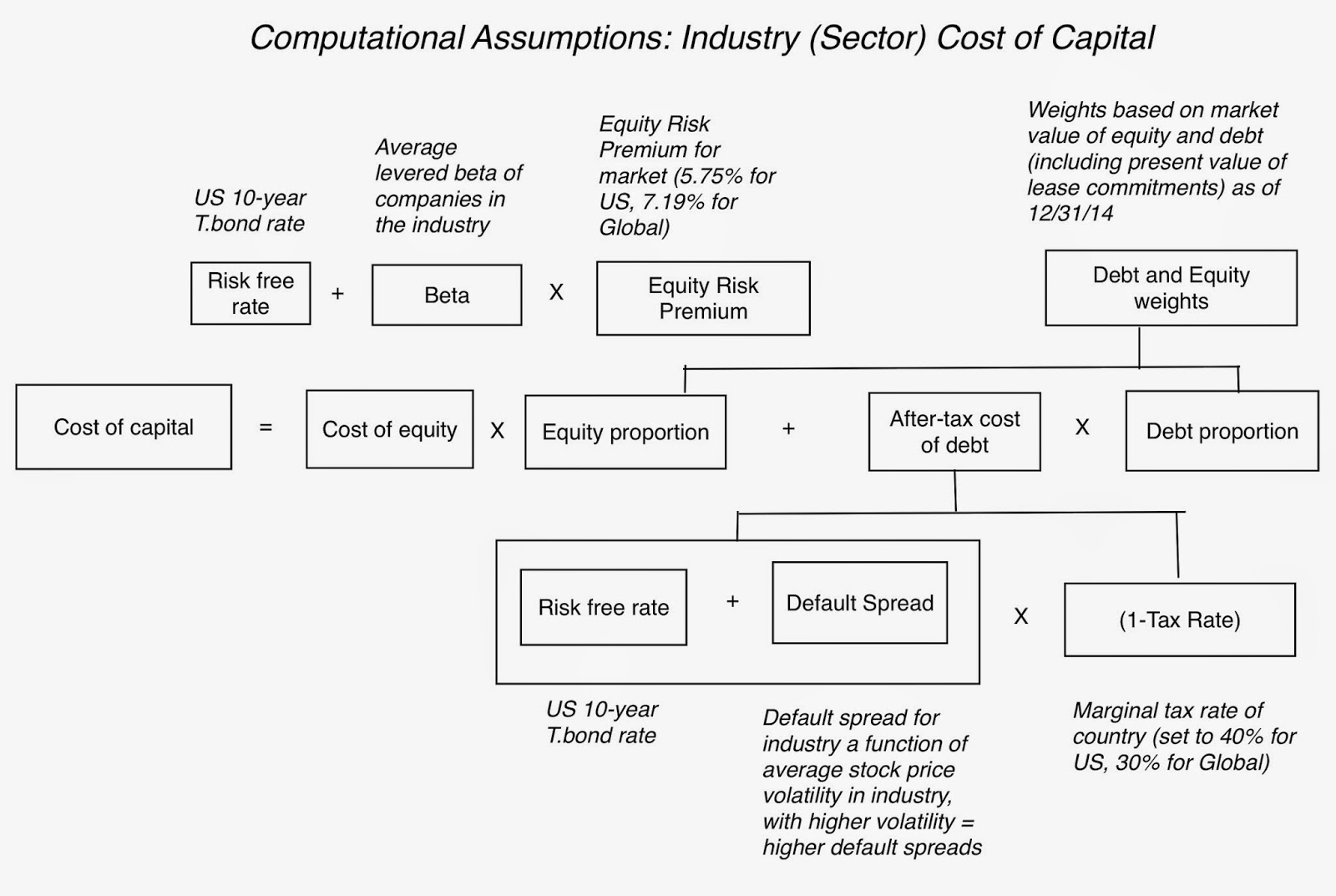 The results from the start of 2015 are captured in the attached spreadsheet, which includes costs of capital by sector not only for global companies, but also includes my regional estimates.

b. Cost of Capital - By company
As part of my data analysis, I also try to estimate the cost of capital for each of the 42,410 companies in my database. Since it is impractical to analyze each company in detail, I do have to make some simplifying assumptions. 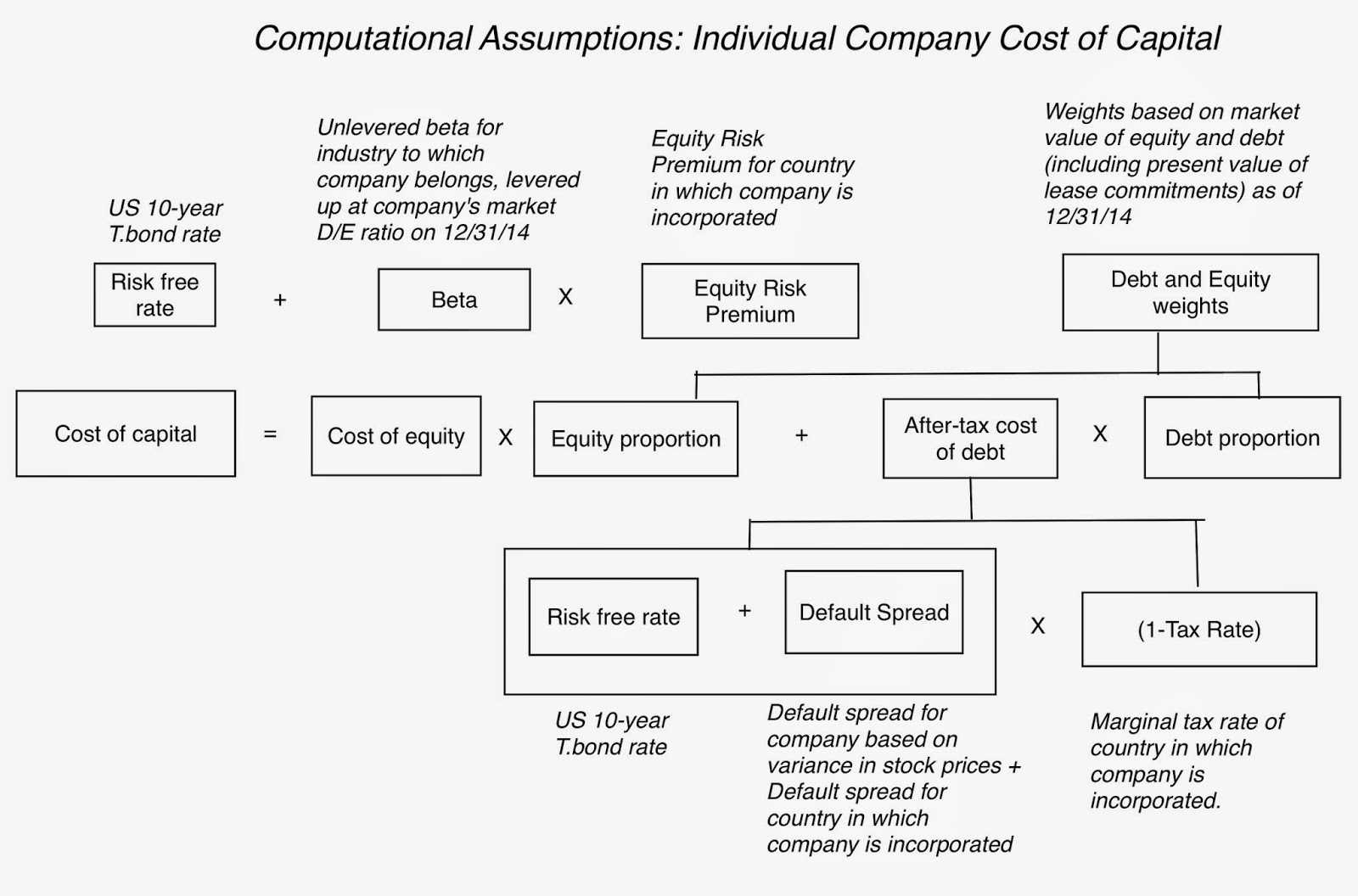 Note that I have used a larger equity risk premium and incorporated sovereign default spreads into the cost of debt, yielding a larger spread in the cost of capital. A cost of capital of 12.5% for a global company would put it in the 94th percentile of companies.

A Cost of Capital Computation Template
If you work in finance, you will run into the challenge of estimating the cost of capital for a company sometime during the course of the year. I hope that the datasets that I have created are useful to you in that endeavor and if you decide to use them, here is a simple template for arriving a company's cost of capital in the currency of your choice.

If you are interested, I have a spreadsheet that has these steps incorporated into it. Give it a shot!

Implications
Looking at the costs of capital across sectors and companies, there are lessons that I take away for valuation and corporate finance:

Prof. why is it that multi-factor models (FF3 or more) haven't caught on in Corporate finance to give a better estimate of different betas?

Professor, as always it is a great read. Thank for that. Few short question:
1) Cost of equity for investor is a the required return, from practical point of view there is no point to invest in stock with required return say 5-6% when you have a risk free rate of 2%... it is hard to believe that the rational investor would choose it.
2) In your attached excel file -some cost of capital really look fishy-e.g.banks (regional) has 3.7% cost of capital and cost of equity of 5.2% vs. risk free rate of 2%...for valuation purpose this kind of cost of capital/equity will produce artificially high value, when banks assets is big black box (from risk point of view)-and diversification in this case also weak argument in valuation the specific stock, or?
What do you think?

I have a few questions in valuation.

1) Why do we adjust the cost of equity for additional risk premias(liquidity, high growth, patent approval..) if we are using the CAPM? Isn't it valid to assume that all risk that is diversifiable can be ignored in deriving the cost of equity, since the marginal investor is assumed to be well diversified? If we include other factors in the model, shouldn't we also measure the beta of the same variables for all the other stocks to keep consistent?

3) How do we go about projecting future CFs so not to double count, or underestimate risk, that is captured in the cost of capital? You've mentioned before that adjusting the discount rate is a better method than reflecting risk in the expected cash flow (assuming the project/company goes as we hope to), or do we reduce the cash flows to reflect this added risk, and only plug in it's cost of debt, and the cost of equity based on it's industrial exposure to the market in the CAPM's beta? I find this part of valuation subjective and hard to measure. In fact, I don't really trust the CAPM in providing an accurate representation of Ke and expected return.

For example, a turnaround commercial bank that is expected to grow substantially in the first ten years should not get the beta of the industry which is around 0.8, since that will likely overestimate it's value, then how do we adjust it's Ke in this case?

Thanks a lot for all your work!

Prudent Investor,
1. I think you are mistaking what you want for what investors will settle for. I can almost guarantee you that there are investors out there who are pricing stocks to earn 5-6% and are perfectly okay with it.
2. Regional banks are actually far safer than money center banks. An old-fashioned bank that makes money off the spread and pays out 80% of its income as dividends is more bond than stock and should have a required return to reflect that.

Ahmed,
1. Who is we? I don't adjust my discount rate for any of these and think it is a bad practice. It is sloppy, lazy and leads to the double counting of risk sometimes.
2. Yes and that is what I am doing. And if you do it right, it is also the marginal cost of debt.
3. See my answer to (1).

Thank you for the reply.

Then in your view, what is the best way of estimating Ke that investors should adopt? There are other multi-factor models besides the CAPM that attempt to 'explain' individual returns, but I think that for a well diversified investor (eg. institutional investor) the excess returns and losses that are uncorrelated to the market portfolio can be ignored, and are diversified away, leaving only the security market line as the single most practical way for the well-diversified investor in expecting future returns.

But that leaves something to be desired, if the correlation of that specific security to the market is low, then the CAPM beta might not be a good indicator of future returns, which goes further to ascertain the use of other factor model in attempt to predict the E(R).

With that said, how do you go about incorporating discount rates for equity, since the cost of equity should be unique depending on the marginal investor. Is it prudent to capture total risk, use multi-factor models as an inbetween solution, or use the more conservative CAPM?

Ahmed,
The first thing to do is to let loose the notion that the discount rate is the receptacle for all your fears and hopes. It is not. In my view, it is not the key part of DCF and rather than worry about the discount rate being too low or it being lightly correlated with future returns (it should in any diversified portfolio; that is a feature of diversification, not a bug), spend more of your time estimating the expected cash flows.

Professor, thanks for posting this great summary. I have two questions:

1) Because Equity is considered perpetual, or at least very long term, why not use 30-year T-bond to calculate Cost of Equity?

2)I remember reading a paper of yours saying that we should use yield on zero coupon bond to estimate risk free rate to avoid reinvestment risk. Does the 10-year T-Bond rate in your article refer to zero coupon bond?

Suppose I am using USD risk free rate to compute cost of equity for a business found in another country. The business cash flow is in USD instead of its local currency. Do I have to add inflation differential?