The Tax Story in 2015: Myths, Misconceptions and Reality Checks

Each of us believes that we pay our fair share in taxes and that it is other people that do not, and not surprisingly, we find evidence to back up our priors. I find that the only way to at least partially offset my own biases is to look at the data. I have done it before, as in this post last year, but with the new data in hand, I thought it is worth an update.

Corporate Tax Rates across Countries
I believe that the US tax code is full of perverse incentives for corporations to borrow too much and to under invest domestically, and that change will be slow to come (and I hope that I am wrong). Since corporate behavior is affected by tax differences across countries, I start by look at differences in corporate tax rates across countries, with a helping hand from KPMG, below:

While there are numerous countries competing for the prize of having the lowest corporate tax rate, the battle for highest tax rate looks like no contest, with the US as the winner (with a marginal tax rate of 40%).

It is worth noting that two decades ago, there would have been lots of competition for the US at the top of the table, but much of it has faded, not because the US has raised its tax rate (it has not) but because the rest of the world has moved on. Just as an aside, and this was the main focus of my post in August, the US is one of six countries that tries to tax foreign income at the US corporate tax rate, which leads to predictable consequences (trapped cash, inversion etc.)

Effective Tax Rates across Countries
According to the tax scolds, US companies are tax cheats and don’t pay their fair share in taxes, thus rendering the corporate tax rates moot. That claim can be easily checked by looking at the effective tax rates paid by companies in different countries in 2014 and they are captured in the picture below:

In my post on taxes last year, I developed a measure of tax efficiency obtained by comparing the effective tax rate paid by companies to the marginal tax rate. Updating that measure to reflect the 2014 effective tax rates, here is the list of the least efficient tax systems in the world (eliminating pure tax havens and city/states): 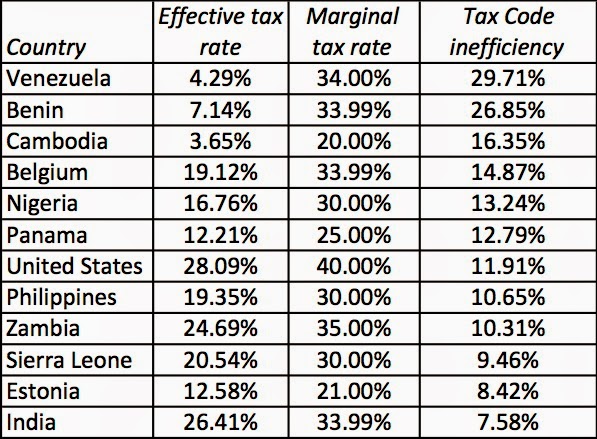 The US remains in the top ten list, a dubious distinction given the company it is keeping on this list.

Effective Tax Rates across sectors and size classes
Are some sectors more likely to hold back on paying taxes than others? Given that the tax code has been used as a mechanism by the legislature for the dubious purpose of encouraging “good” behavior (job creation and green energy come to mind), I would not be surprised if this were not the case. As part of my data update, I do compute different measures of taxes paid, by sector. In the table below, I list the dozen industries that pay the highest effective tax rates and the ones that pay the lowest:

The list of the lowest tax paying sectors includes some of the usual suspects, such as real estate investment trusts (since the tax code explicitly relieves them of the tax burden). It is also interesting that investment and asset management shows up on the list, perhaps reflecting the advantageous treatment of income, at least to some portfolio managers. The list of the highest tax paying sectors is tilted towards the retail sector and transportation companies. Oil and gas offers an interesting contrast, with oil/gas distribution companies in the lowest tax paying list and integrated and production companies showing up on the highest tax paying list.

I was also interested is looking at the tax burdens at large versus small companies, again with the intent of examining another widely disseminated view that the largest companies are the ones that pay the least in taxes. In the table below, I look at different measures of taxes paid by U.S. companies, classified by market capitalization into ten classes:
The critics of large companies must be looking at very different numbers than I am, because at least based on taxes paid in 2014, it is the largest companies that paid the highest taxes, not the smallest. So much for extrapolating from the GE pays no taxes story!

A New Corporate Tax Code
There is talk in the US Congress of fixing the corporate tax code, to make it simpler, fairer and more effective. I may be revealing my ignorance of tax economics but I have a very simple rewrite of the tax code that will deliver (in my view):

If you don't like my suggestions, don't worry! I don't think that there is much chance that my tax code rewrite will become law.

With respect to the US, this would explain, in large part, the wide divergence of "statutory" and "effective" rates. US multinational companies (another omitted fact---whether we are talking about publicly traded companies only and I assume this is so) enjoy lower effective rates simply because a significant portion of their earnings are not (currently) subject to the exorbitant US statutory rates. US multinational companies have a 28 percent effective rate largely because they have significant foreign earnings taxed at more reasonable rates and those earnings are trapped abroad due to the high cost of repatriating those earnings.

It is, alas, very common for mainstream media to confuse effective *global" rates with effective *domestic* rates, or at least not to distinguish them, when talking about the tax rates suffered by businesses incorporated in the US. One expects a more nuanced discussion here.

That said, the suggested reforms are largely appropriate.