While it is true that companies that are in businesses that require heavy infrastructure investment (toll roads, telecommunications, automobiles) have low investment flexibility, and service and software firms generally have high investment flexibility, the divide is not necessarily on whether the investments are in tangible or intangible assets. Pharmaceutical companies, for instance, have low investment flexibility because they have to spend large amounts in R&D, with significant leakage (as some R&D will not pay off) and have to wait long periods before commercial success. Over the last decade, disruption in many businesses with a history of low investment flexibility has come from new entrants with business models that allow them to scale up quickly, with relatively low investment. Uber and Airbnb are examples of sharing economy companies that have had a decisive advantage this dimension over their established competitors. To see how this crisis has played out on the financial flexibility dimension, I classified all non-financial service companies listed globally, based upon the ratio of sales to invested capital, on the (questionable) assumption that invested capital (computed from the accounting balance sheet values of debt, equity and cash) measures reinvestment, into ten deciles:
Note that companies that can generate the most revenues per dollar of invested capital are signaling the highest investment flexibility and they have done far better during this crisis than firms that are in lowest decile of this measure. Some of this may be spurious correlation, but it is an interesting first take on how investment flexibility has been treated by the COVID market.
b. Operating Flexibility
During the course of operations, businesses will be hit by shock that cause their revenues to unexpectedly increase or drop, and operating flexibility measures how those revenue changes flow through into operating profitability. The key to decoding this effect is to break down the operating expenses of a company into fixed and variable, with the latter moving up and down with revenues, while the former stays fixed: 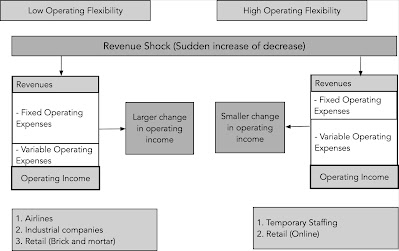 Companies with high fixed costs, as a percent of revenues, will see much more dramatic swings in operating income, as revenues change, than companies that have more flexible cost structures. It is not surprising, therefore, that airlines have wild swings in profitability from good years to bad ones, whereas online retailers and service businesses have more muted effects. To see how operating flexibility has played out in this market, I would have liked to have broken costs down into fixed and variable for all companies, but lacking clean accounting measures of either, I settled for gross profit margins, on the assumption that companies with high gross margins have far more flexibility in dealing with revenue shocks than companies with low margins. Breaking down companies based upon gross margin into deciles, here is what I find:
With a full admission that gross margin is a flawed measure of operating flexibility, companies with higher gross margins have done better than companies with lower gross margins, as this crisis has unfolded.
c. Financing Flexibility
As revenues go up and down, and operating income tracks those changes, financial flexibility measures how much net income (to equity investors) is altered, with firms with low financial flexibility showing much bigger swings in net income for a given change in operating income. The key drivers of financial flexibility are debt obligations and cash holdings, with the interest expenses on the former pushing up net income volatility, and the interest income from the latter dampening that volatility:

If net debt, as a percent of cash flows or value, is the driver of financial flexibility, we can see how financial flexibility has played out in this crisis by breaking companies down into deciles based upon Net Debt as a multiple of EBITDA:
Companies with high net debt ratios have low financial flexibility and they have been damaged far more than companies with low net debt ratios. Note that the lowest decile of net debt ratios includes firms that have negative net debt, i.e., cash balances that exceed the debt, and they show an increase in market capitalizations between February 14 and June 26.
d. Cash Return Flexibility
The end game, when investing in publicly traded company stocks, is to collect cash flows from that investment, and companies have two choices when it comes to returning cash. The conventional approach has been to pay dividends, but over the last three decades, US companies in particular have turned to returning cash in the form of buybacks. Both dividends and buybacks have to be funded by cashflows to equity investors, and cash return flexibility measures how quickly companies can adjust their cash returns to reflect changes in cash flows to equity: 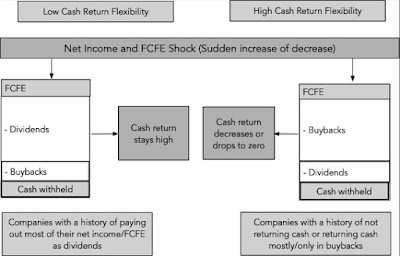 Obviously, companies that return little or no cash, relative to their free cash flows to equity, are not only accumulating cash, but have far more cash return flexibility than companies that return a large proportion of their cash flows. Since dividends still remain the primary mechanism for returning cash across the world, I start by looking at dividend yield, classified into deciles, and looking at the market action in each decile for global companies:
Clearly non-dividend paying stocks and stocks with low dividend yields have done much better than companies with high dividend yields. Among companies that do return large portions of cash, those that return the bulk of their cash flows in the form of dividends have far less flexibility than those that buy back stock, mostly because dividends are sticky, since once they are initiated and set, companies are reluctant to change them. To examine whether the mode of cash return has been a factor in the market action, I break companies into four groups based upon whether they pay dividends and/or buy back stock: 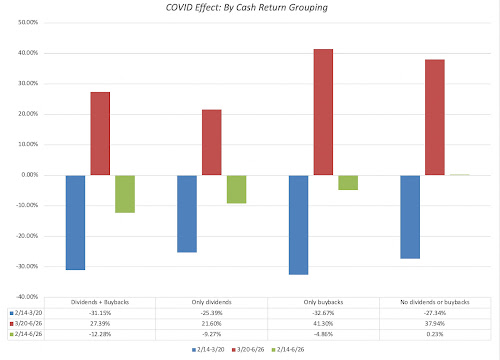 While companies that pay both dividends and buybacks have been worst affected and companies that use neither have performed the best over the period, isolating only companies that pay only dividends or buy back stock, companies that pay only dividends have under performed companies that buy back only stock. While the results are only indicative, they do suggest that making buybacks the bogeyman in this crisis is not backed up by the evidence.
Implications and Conclusion
During this crisis, markets have rewarded flexible companies, a continuation of a trend that predate the crisis to the last one. If the last decade has been a disruptive one, that disruption has been largely driven  by companies that have not only built flexible structures, but also used that flexibility to gain competitive advantages over their status quo competitors. As companies get pushed to increase flexibility, it is worth noting that this quest comes with costs, and these trade offs have to be acknowledged:
YouTube Video
Data
Viral Market Update Posts
Posted by Aswath Damodaran at 6:54 PM